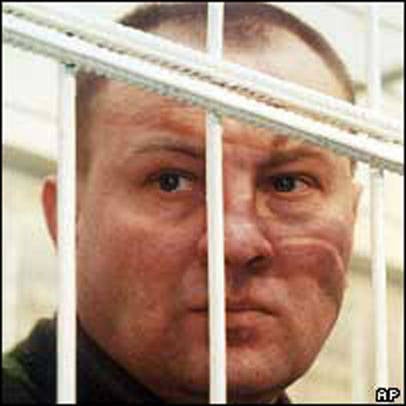 Former Colonel Yury Budanov was shot dead on Komsomolsky Avenue. The killer shot 6 once, four bullets hit the head, and then disappeared on a foreign car. Budanov in 2003 was convicted for the murder of Chechen woman Kungaeva, but he left early. Kadyrov called Budanov an enemy of the Chechen people. The investigation believes that the murder of Budanov is a provocation, and it is premature to talk about the involvement of ethnic groups.


The crime was committed at No. XXUMX at about noon: an unknown person shot Budanov in the head with a pistol, after which he disappeared on a white Mitsubishi Lancer. According to eyewitnesses, the offender was wearing a blue jacket with a hood. To search for the shooter in the capital, a special plan "Interception" was introduced.

At the scene of the murder on Komsomolsky Prospekt, investigators and forensic officers of the Main Investigative Board in Moscow work.

According to operatives, the crime is a custom character.

The operatives have already seized the recordings of video surveillance cameras at the site. They expect to find the moment of the murder on the records, and further to identify the killer.

The murder was committed in the park between two houses, near the playground. At the same time, a few hundred meters from the crime scene, on Dovator Street, a car was found, on which, as investigators suspect, the killers hid. The car is examined by experts and a dog handler.


In turn, the official representative of the Investigative Committee of Russia, Vladimir Markin, said that in connection with the murder of Budanov, the 2 article 105 of the Criminal Code of the Russian Federation ("Murder") and the 222 article ("Illicit trafficking weapons")." The investigation does not exclude that the murder of Budanov was carefully planned, the victims may have been monitored, "Markin also said.

He later added that the investigation does not exclude that this murder is a provocation, and so far nothing is known about the participation of ethnic groups.

“Considering Budanov’s personality, the investigation does not exclude that the murder was committed for provocative purposes. In addition, it’s premature to say that ethnic groups could be behind this murder. The investigation doesn’t have any information confirming such a version” - said Markin.

Recall Budanov in 2003 was sentenced to 10 for years for kidnapping and killing 18-year-old Chechen woman Elza Kungaeva, he was released on parole in 2009. Immediately after Budanov’s release, the head of Chechnya, Ramzan Kadyrov, called this decision shameful, and the colonel himself was an enemy of the Chechen people. "We do not tolerate insults," Kadyrov said at the time and added that he would use all legal means at his disposal to ensure that Budanov "received what he deserved."

Yuri Dmitrievich Budanov was born on November 24, 1963 in the city of Khartsyz, Donetsk region, Ukrainian SSR. In 1987 he graduated from Kharkov Guards Higher tank command school to them. Supreme Council of the Ukrainian SSR, in 1999 (in absentia) - Combined Arms Academy of the Armed Forces of the Russian Federation.

Since September, 1999, together with the regiment, took part in hostilities in the territory of the Chechen Republic. In January, 2000 was awarded the Order of Courage and received (prematurely) the rank of colonel.

30 March 2000 Yury Budanov was arrested by officers of the military prosecutor’s office on charges of abduction, rape and murder of 18-year-old Chechen woman Elza Kungaeva. During the investigation, Budanov testified that, considering a resident of the village of Tangshi-Chu, Kungayeva was a sniper of one of the gangs, ordered subordinates to take the girl to the regiment, and then - during interrogation - strangled her, because Kungaeva allegedly resisted and tried to seize the weapon. Subsequently, Budanov, without denying the fact of the murder, insisted that he acted in the heat of passion.

28 February 2001 of the year in the North Caucasus District Military Court (Rostov-on-Don) began the trial of Budanov, who was charged with crimes under articles 126 (kidnapping), 105 (murder) and 286 (abuse of power) of the Criminal Code of the Russian Federation.

In July, 2001, the North Caucasian District Military Court announced a break in court hearings in connection with the psychiatric examination of Budanov at the State Scientific Center for Social and Forensic Psychiatry. V.P. Serbsky (Moscow). In October of the same year - after passing the examination - Budanov was transferred back to Rostov-on-Don.

16 December 2002 of the year in the North Caucasus District Military Court, an expert opinion was announced, according to which Budanov was declared insane due to the effects of a contusion.

31 December 2002 of the Year The North-Caucasian District Military Court ruled to exonerate Budanov from criminal responsibility and send him for compulsory treatment, but on February 28 2003 of the Russian Federation the Supreme Court declared the decision unjustified and made in violation of substantive and procedural law and sent the case to a new consideration (with the measure of restraint in relation to Budanov remained the same - the detention in the remand prison of Rostov-on-Don).

25 July 2003, the North Caucasian District Military Court found Budanov guilty of abuse of office, as well as the abduction and murder of Kungaeva. According to the court order, Budanov was deprived of military rank and Order of Courage and sentenced to ten years in a strict regime colony (when the court pronounced the sentence, Budanov’s participation in the counter-terrorist operation and his minor children were taken into account), and then transferred to the colony JI 78 / 3 ( Dimitrovgrad city of the Ulyanovsk region).

17 May 2004 Budanov filed a petition for clemency addressed to the Russian President, but 19 May withdrew him. The reason for the recall was the uncertainty about the citizenship of Budanov, since he was called up to the USSR Armed Forces as early as 1982 from the Ukrainian SSR (May 21, 2004, Budanov was given a passport of a citizen of the Russian Federation).

15 September 2004 The Ulyanovsk regional pardon commission satisfied Budanov’s new pardon, but this decision led to protests from the Chechen public, as well as a statement by the head of the Chechen government, Ramzan Kadyrov, that “we will find an opportunity to pay him back merit ", and on September 21 the convict was forced to withdraw the petition.

9 June 2009, it became known that Yury Budanov was interrogated as a suspect in a criminal case on the murder of Chechen residents. According to the UPC RF, in 2000, eighteen residents of the Chechen Republic were illegally deprived of their liberty at a checkpoint located near the Duba-Yurt settlement of the Shali district of Chechnya. Three of them were subsequently found killed. A number of local residents claimed that Budanov was involved in the commission of this crime.

10 June 2009, the Investigation Committee at the Prosecutor’s Office (UPC) reported that Budanov was suspected of having killed Chechen residents. According to the UPC, Budanov showed that he could not physically be at the checkpoint when the 18 residents of Chechnya disappeared without a trace. Budanov’s testimony was confirmed by the criminal case file.