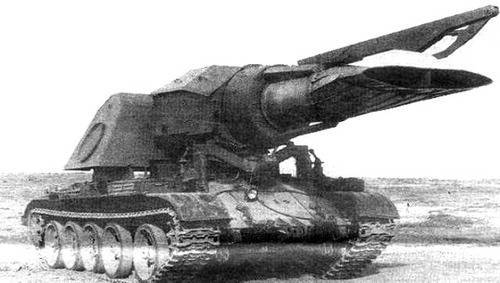 You can hit the enemy in a thousand different ways. This is 1001. The enemy can simply blow off. Forever and ever. And at the same time burn. Fully. At any depth.

Designed to detect and trawling mines installed on paved roads.

It is a chassis tank T-54 with a VK-1 turbojet engine installed on it.

I can imagine how worried the enemy intelligence was when the unknown technical monster once appeared on the Afghan highways. "Monster" fire roads dubbed for a formidable appearance.
The airfield heat engine became the prototype and likeness of the “Warming”. Based on the chassis of the T-54 tank, a jet engine from the MiG-15 was installed, a voluminous tank with kerosene was attached ... It is not surprising that the uninitiated partisan scouts initially took the giant trawler nozzle into the barrel of a strange cannon and reported in panic about future troubles. Meanwhile, the driver of ml. Sergeant V. Kovyazin (in combat stories that name will remain) confidently led the “Warm Up” along the Jalalabad-Asadabad highway, literally revealing the machinations of the saboteurs themselves. In the presentation of the document, it looked like this: "When a gas-dynamic jet is applied to the road cover with destroyed asphalt pavement, soil and rubble are ejected, all the irregularities are clearly exposed ..." Speaking easier, the crew broke the camouflage cover from the mines "clogged" in the rocky bed. They looked like nuts, peeled from the shell.
To the question: where did the "monster" go, just assumptions: it was lost in the mountains, or maybe at the dump of the experimental plant.