10 2011 June
5
More recently, about climate weapons they spoke as something completely unrealistic, but in the light of new events around this issue there was a stir. First of all, this is due to the March earthquake in Japan. So, in some media reports appeared that a powerful earthquake was not of natural origin, but was caused as a result of tests by the US military of unknown weapons in the depths of the Pacific Ocean. Whether it is true or not is unknown, but to date there is no evidence of this version, nor its refutation. So what is such a formidable climate weapon?


Climate weapons are technologies for influencing one or another natural phenomenon. Today, these are mainly ways to control the movement of air masses, fluctuations in the earth's crust, rainfall and other natural environmental factors. The main question is what special technologies of geophysical weapons actually exist and how can they be used to achieve any military-political goals.

Reasoning about climate weapons are rarely accompanied by a display of facts. This is natural - its main essence lies in secrecy. The management of geophysical catastrophes loses its meaning if it attracts the interest of the world community - in such a case it is much easier to manage with precision shots or economic pressure.

At the peak of vigorous work on the creation of climate weapons in 1977, the UN Convention was adopted and signed, which prohibits military or other hostile influence on the environment. This document was signed by all the leading countries of the world and puts climate weapons on a par with chemical and nuclear.

Tropical hurricanes have become a real disaster for the United States. And since in this country in recent years there has been a steady tendency for people to inhabit coastal areas, the damage from various cyclones is increasing every year. The record holder was the Katrina storm in 2005, the devastating consequences of which cost the US treasury 41 a billion dollars, which, for example, for any third world country would be a catastrophic and irreparable financial loss, significantly reducing its economic, social and military potential.

The United States government, aware of the seriousness of the problem, even in the 60 of the last century, initiated the beginning of work on the control of hurricanes, and initially they were carried out exclusively for peaceful purposes: the protection of the coast of the country from the elements.

The work on the famous Stormfury project by American scientists began in 1962 year. Within the framework of this scientific project, for the first time in the world, large-scale experiments were carried out on the so-called seeding of clouds with silver iodide powder, which, according to scientists, was to turn an increasing hurricane into a harmless and pleasant rain.

Work in the laboratories and practical experiments proceeded with varying success: scientists reported that the force of the wind flow is reduced by almost 30%, at the same time a huge number of cases when, after sowing clouds, it did not affect the hurricane at all. It can be argued that, in general, the hurricane localization project failed, although it worked until the 1983 year. But researchers during the experiments found a reliable and practically feasible way to cause rain, which was a success. Unfortunately, the results of their work received a completely different application; they were immediately used by the resourceful American military in the war with Vietnam. 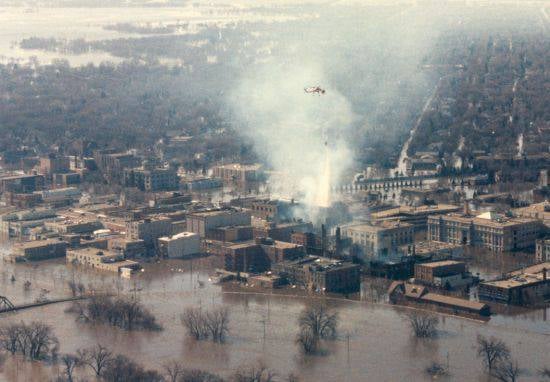 In the period from 1967 to 1972, the US Army participated in the Popeye operation to sow clouds with silver iodide powder. The goal of this large-scale military operation was the achievement of the goal connected with the difficulty of the actions of the rebels and the destruction of the Ho Chi Minh trail, which, according to the plan, was to be washed away with water. The first use of silver iodide in the territory of the Boloven plateau, located in the valley of the Si Cong river, was successful: the processed cloud crossed the borders of Vietnam, and 23 centimeters of precipitation fell to the camp of the American special forces defeated there. As a result of the operation Popeye, the tropical rain season in the cultivated area increased from 30 to 45 days, and the number of daily precipitation jumped by a third. Aerial reconnaissance confirmed the difficulty of movement on the roads, the soldiers said that the soil under their feet turned into a solid sea of ​​mud.

To achieve such results, it took the use of only three C-130 transport aircraft and two F-4C fighter jets, which served as cover. In addition, despite the ultimatories of the Pentagon, a large number of experts believe that the Popeye project caused a catastrophic flood in the territory of North Vietnam in the 1971 year.

It should be noted that the political complications arising from the use of scientific technology for military purposes did not stop the US government. The possible international censure of climate manipulation Robert S. McNamara, the US Secretary of Defense at the time, responded that similar statements were used in the recent past to prevent military activities strictly in the interests of the national security of the United States, that is, only foolish words of ill-wishers who want to prevent Americans to protect their interests. Note that the government of Laos was not even notified of the experiments with the climate. With the departure of the US Army from Vietnam, experiments involving exposure to tropical typhoons did not stop: in the 1980's, USSR aircraft were already doing the same.

At present, modern, more sophisticated and powerful reagents capable of initiating precipitation are formed and applied. So, in particular, Dyn-O-Gel powder, produced by Dyn-O-Mat, is able to absorb a huge amount of moisture, turning into a sticky gel. At the same time, the powder did not pass the storm warning experiments: the rain falling in the emerging tornado caused only minor fluctuations in the wind speed literally a few meters per second. At the same time, Dyn-O-Gel Powder can cause huge rainfalls, flooding some areas and causing significant drought in others.

Damage to the enemy’s economy and army can be caused not only by precipitation, but also by strong hurricane winds. The wind is capable of destroying infrastructure with tremendous speed, making combat use impossible aviation, fetters the actions of ground forces, complicates the use of tactical and ballistic missiles. But can a storm be the first stage of an invasion of the coast of an unfriendly state?

Moshe Alamaro, a scientist at the Massachusetts University of Technology, argues that there are special technologies for hurricane management. Their main point is to artificially adjust the temperature at various sites of the emerging tornado. The movement is controlled by precisely directed heating or, conversely, by cooling certain areas by sowing with soot, microwave irradiation, water evaporation, laser, and the like. According to the scientist, a great way to influence the wind would be a huge sea vessel equipped with jet engines, which create a huge upward air flow. Literally after several hours of active work, the engines initiate the formation of a tornado, and it is obediently, as if following a chain following a vessel. 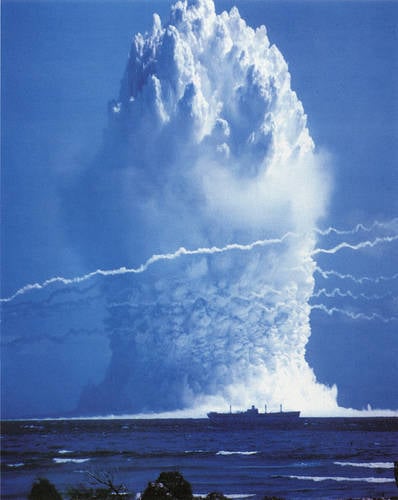 Recent events in Japan related to the earthquake and the previously powerful tsunami in Indonesia suggest whether it is possible to cause such catastrophic events artificially? In 2000, a secret American project called Project Seal, developed in the 1944-1945 years, became public. This military program under the leadership of Professor Thomas Lich suggested that a large amount of explosives be exploded on the ocean floor, which should have led to a local tsunami washing away buildings located on the enemy’s coast.

The first experiment was conducted in the Pacific Ocean, not far from the Wangaparaoa peninsula belonging to New Zealand. The participants in the experiment announced success, but it is still unknown how this project ended in reality. Later, many sea tests of powerful atomic bombs, more suitable for creating giant waves, were also carried out. There is information that the head of the scientific project, Thomas Leech, was planning to ship a nuclear weapon to the site of the Bikini Atoll to collect the information necessary to improve the tsunami bomb project.

Currently, there is no confirmed information on the use of climate weapons, with the exception of Operation Popeye, declassified by a sly American journalist. Nevertheless, disputes related to the possible use of reagents that activate precipitation occur periodically: thousands of farmers from the driest regions across the globe gaze at the sky and sometimes see suspicious trails that drag on planes.

Some experts suspect that last year's temperature records in Russia are rooted not in such a thing as global warming, but in the use by the US military of its own developments of climate weapons, this was once written on the pages of Komsomolskaya Pravda. The first suspect was the notorious HAARP station, located in Alaska, 250 kilometers northeast of Anchorage. The Americans claim that the station was built ostensibly to study the effects of the aurora borealis, but some experts hardly believe this. It is doubtful that the station emits a kilowatt of 3600 into the heavens, it has become the most powerful device in the world to influence the ionosphere. Military experts believe that this weapon is climatic or ionospheric. Moreover, all significant natural disasters in Russia and other countries of the world began, oddly enough, immediately after the station was launched.

The second amazing fact: on the eve of last year's weather catastrophe of NASA, a new unmanned spacecraft X-37B was launched into space orbit, which delivered powerful lasers to near-earth space. The mission of X-37B was carried out in strict secrecy, nothing is known about its time in space either. According to some reports, a fully automatic ship was supposed to spend at least 270 days in space, after which it would land at one of the air force bases in the United States. It should be added that according to official reports of the Pentagon, X-37В should have entered a given orbit and carried out a number of tests there, the essence and purpose of which was not disclosed. At the same time, shortly before the launch, the Western media reported that Raytheon had carried out successful tests of a combat laser machine in May 2010. 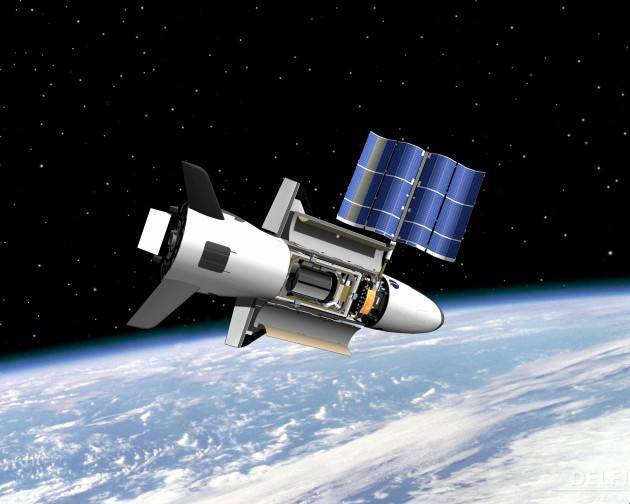 The use of large-scale climatic strikes now will lead not only to condemnation by the world community, but also to serious opposition, comparable to the reaction to a nuclear attack. It follows from this logical conclusion that the “strategic” climate weapon, which could well cause such catastrophes as the Katrina storm in 2005 or unprecedented drought in Russia in 2010, is either not used, or there is a global conspiracy of a dozen countries, including damage to their own interests.

Ctrl Enter
Noticed oshЫbku Highlight text and press. Ctrl + Enter
We are
Weapon 2100 of the year?The era of other wars has begun
Military Reviewin Yandex News
Military Reviewin Google News
5 comments
Information
Dear reader, to leave comments on the publication, you must to register.