How does a Russian differ from a Russian or a Chechen? 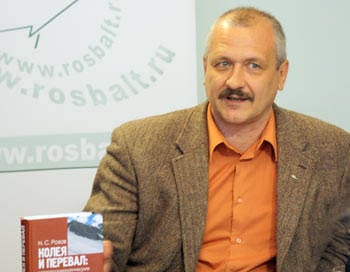 How does a Russian differ from a Russian or a Chechen? What is the difference between nationality and ethnicity? And why is a new crisis brewing in Russia? Rosbalt was told about this by Professor of the University of Novosibirsk, compiler of the Time of the World almanac, translator of the Sociology of Philosophy R. Collins, author of books on the theory of values ​​and philosophy stories, PhD Nikolay Rozov.


- Your report, which was discussed at the scientific conference “Russian Identity and the Space of Russia”, is called “Modern Russian Mentality: Diversity of Habits and Directions of Changes”. What do you mean by "Russian mentality"? Is he really?

- First of all, I can see that the usual use of words is somewhat distorted. What we used to call nationality is called ethnicity in science. And the nationality - nacionalite - is a civil affiliation to any state. Ethnic Vietnamese, who are French citizens, by nationality - the French. When we call them Vietnamese, we point to ethnicity. And this is considered not very decent. Accordingly, if we talk about Russia, then we have Russian citizens. It can be said that since Russian citizens belong to different ethnic groups, there is a difference in mental structures - for example, between Russians-Russians and Russians-Ukrainians, Russians-Belarusians and Russians-Tatars. And, probably, it is possible to determine this with the help of some subtle methods. Although, in my opinion, between Russians-Russians and Russians-Ukrainians we will not find any serious differences.

- This is due to a common ethnicity?

- Partly - by ethnicity, and partly - by their inclusion in the same social institutions: they studied in the same schools, where they were in the same system of relations, and so on. Most likely, there are differences among the Tatars, who live in their more or less closed Tatar environment, from the Russians. This will concern the specifics of the institution of relationships, kinship among the Tatars. Some scientists are exploring precisely these differences. But I am interested in the peculiarities of the mentality and political culture of the citizens of Russia. In my opinion, there are no fundamental differences in the attitude towards the authorities, to their place in society, to how the power should be arranged, between different ethnicities. At least, it is not so important that I use it in my macrosociological research. That's why I'm talking about the Russian mentality.

- For example, is the mentality of ethnic Chechens and ethnic Yakuts different?

- Of course, different. Moreover, it is not necessary to think that it is the same for all Chechens or Yakuts. Differences can be found everywhere if there is such a research query. But it seems to me right to talk about the Russian mentality, because it is extremely important politically - the formation of the Russian nation. It is the citizens of Russia. When we talk about the Russian mentality, opposing it to Tatar, German or Jewish, it leads to some oppositions, which often have an estimated and, I would even say, xenophobic orientation. That is, it is assumed that Russians have some qualities that are significantly better than non-Russians. And this leads to tension, conflict, irritation, and so on ...

It would be very strange if in modern Germany there were conferences on the Prussian mentality, which would be opposed to the Bavarian or Cologne. In America, there would be conferences on the mentality of white Protestants: they say, here we are, white Protestants, and those who are Catholics, or Latinos, or, all the more, negros, are all not real Americans. Such actions split the country along very unpleasant and painful ethnic boundaries. Therefore, the Germans are very right, speaking of German identity. This is for them a shrine. Or an American citizen in the United States. And what color is the skin there, as if it doesn't matter. Actually it is important, but at least they pretend that it does not matter. And it is very important.

- And in Russia, it turns out, the selection is encouraged: I am Russian, I am a Chechen, I am a Jew, but there is no encouragement that I am a Russian?

- As I understand it, Yeltsin tried to do this when he said “Russians”. But one thing that he says, another thing - the real state policy. This did not result in a state policy — systematic, consistent, that would have outlived various rulers. Accordingly, since a holy place is never empty, such ethnopolitical movements have appeared. And speaking of Russians, the ethnopolitical movement glorifying Russians has such a chauvinistic character. Why? Because in Russia the overwhelming majority are Russians. And if they are given preference, then, of course, non-Russians will feel deprived. What good can it do?

- It is often said that Russian history is developing in a spiral. And in the book “The Rut and the Pass: the Macroso-sociological Foundations of the Strategies of Russia in the 21st Century,” you mention the cycles by which it “roams” the history of Russia. Are the spirals and cycles in your understanding the same thing?

- The spiral is another, there everything is not only repeated, but increasing. Of course, something is growing, there is the so-called dynamics of age-old trends. For example, the level of urbanization is growing, there are more urban residents than rural ones. This is not a cyclical process. Although there could also be a cycle here, when the townspeople begin to move to the villages. But mostly since the end of the 19th century, more and more villagers sometimes voluntarily, sometimes almost forcibly move to the cities. Or, for example, the level of education rises. This is also an age-old trend.

A cyclical differently perceived. Some talk about the repetition of past eras. Although it is clear that full repetition never happens. Some say that it is necessary after a certain number of years, through 12 or 25, it will all happen again. There are no such sequences. This is all some fun. And what is there? And there are periods that, in many essential ways, are similar to some previous periods. And this similarity can be identified and separately considered. This is what I call phases or cycles. I counted six of them: an authoritarian pullback, then stagnation, then a crisis, from which there can be a transition either again to an authoritarian pullback, or to liberalization. Then again roll back. Sometimes, when already quite unfavorable circumstances converge, then crises are so deep that they lead to the disintegration of the state.

- Yes, 1991 year too. Although, fortunately, then everything happened almost bloodlessly.

- And now what phase?

- Stagnation. Stagnation and the maturing of a new crisis.