Who is behind the accident at the factory "More" in Feodosia

9 2011 June
19
One of the biggest mysteries of this year may well be историяassociated with the production of air-cushion ships class "Bison" in Feodosia. If it is certain, the riddle is not at the beginning of production, which many did not expect, given the fact that the shipyard “More” had been out of work for a long time, but in its collapse. Now about everything in order. 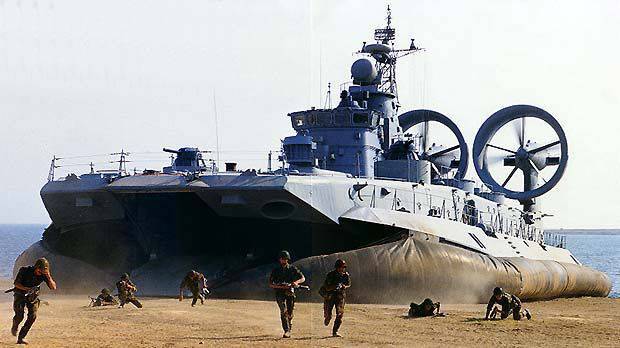 Last fall, the state-owned company Ukrspetsexport entered into an extremely lucrative contract with China for the supply of Zubr-type ships. According to official data, the contract amount was 350 million dollars, and the Feodosia plant “More” was chosen as the main enterprise to fulfill the order. It should be noted, the 52-meter workshop of the “More” plant is truly unique. This huge assembly site was served by 2 special bridge cranes, each with a load capacity of 50 tons. They jointly lifted a hovercraft weighing 95 tons.

The reason for which the execution of the order was entrusted to the plant "More", lies in the history of the production of high-speed amphibious assault hovercraft type "Bison". As is known, only six states were able to design and build such vessels in the world: Australia, England, New Zealand, Canada, the USA and the USSR. In our country, production was carried out only in two enterprises - the above-mentioned plant “More” and the Leningrad Almaz Central Design Bureau.

Over the past decades, the production base near Theodosia was like a bare, scorched earth. The plant stood without orders, everything that could be dismantled was stolen from its territory. Dismantled even the railway access branch. The best engineering and working personnel left for Russia to earn money. It is impossible to blame them for this, since in Petersburg a ship-milling worker who came from the Crimea received more than 2000 dollars, which by Ukrainian standards is simply transcendental salary.

But at the end of autumn 2010, everything changed dramatically. Many shipbuilders leave prosperous Petersburg and return to their native Feodosia. Work began to boil at the More factory, for the Chinese there were laid two hovercraft according to project 12322. The high-speed amphibious ship of the Zubr class is intended for landing on any coast and its further fire support. Able to transport goods weighing up to 150 tons, including three tank and 140 people of the landing group. It can travel at a speed of about 120 km / h on water, ice, earth and overcome various obstacles 1,5 meters high. Equipped with five independent gas turbines. Serial production of gas turbogenerators for the Bison is carried out at the Zarya-Mashproekt factory located in Nikolaev.

The most important thing in this story is that, in accordance with the concluded contract, the Chinese had at their disposal unique technical documentation. The fact that the top management of China was interested in the deal confirms the fact that they even agreed to pay a significant part of the debts of the Ukrainian plant “More”.

An order from China would provide Crimeans with work for at least the next five years. What is next is unknown, but you can be completely sure that, having received the necessary technical documentation, the Chinese will start producing the Zubr themselves.

One of the ships ordered under the contract was already in a state of readiness when an emergency occurred, which turned everything upside down. According to the Ministry of Emergency Situations of the Autonomous Republic of Crimea: “When the ship hull was moved by two bridge cranes, the destruction and the subsequent fall of one of them happened. Today, this is all the official information from the “More” plant, but there is data obtained from the plant workers themselves.

According to the statement, the crane beams did not start working at the same time, and the construction dropped due to overloading. At the same time, it is difficult to accept or deny this version. The crane driver, a woman 60 years, died under the rubble. All her life she worked as a welder at the plant and only recently she retrained to a crane operator. In addition to the crane operator, an elderly collector of ship hulls died, to whom a broken cable demolished a skull. An 38-year-old worker was taken to the hospital with broken legs, and several others suffered minor injuries.

Today, the first of the four "Bison", intended for China, continues to hang on the surviving crane beam. Installed armored plates flew off the ship that hung in the air, there was a significant deformation of the hull. Factory workers report that they cannot lower it down because of the danger of a cable breakage and the collapse of the surviving crane beam - “there are no suicides among us”.

Such a tragedy on the Feodosia shipbuilding company "More" occurred for the first time. The main trouble is that during the fall of the crane there was a significant deformation of the supporting structures of the main building of the shop. If we consider the shop outside, it seems to be intact, but during internal inspection it becomes clear that it is unsuitable for further operation. In fact, this is the collapse of a unique production.

In Feodosia, a state interdepartmental commission began to work on establishing the causes of the accident. At the same time, the company does not exclude that in the near future the Chinese side will demand payment of the penalty and even terminate the contract. Indeed, why pay huge money to Ukrspetsexport if you can make Zubry yourself? According to unofficial data, the Chinese received all the necessary technical documentation for the project ahead of time. Most of the engineering personnel of IC More are already operating in China, where a similar plant is being built at an intensive pace.

In addition to Ukraine, Russia was striving to get a contract for “Zubry” for the PRC by all means, even offering the Chinese alternative options. Negotiations on this issue between Russia and China have been conducted over the past ten years, but they ended in vain. According to one of the unofficial versions, the reason for the failure of negotiations was the intransigence of the main developer - Almaz Central Securities and Design Bureau. According to this version, the St. Petersburg people agreed to transfer to China the documentation for the landing ship only after the delivery of their own production of the Zubr 10-15 ships.

On the other hand, it can be assumed that the Russian top management was not interested in selling to the neighboring China the production technologies of a unique ship that could change the military parity in the Far Eastern region. For example, “Bison” is a real nightmare for neighboring uncompromising Taiwan. They can be quite effectively applied in possible border disputes with Russia itself.

Having received a refusal from Russia, Beijing quickly enough and most importantly effectively reached an agreement with Kiev for itself. This was another success of Ukraine in the field of production and export of armaments, which undoubtedly caused a nervous reaction in Russia. Today, many people call the catastrophe in Feodosia beneficial both for the Almaz Central Securities and Design Bureau and for Russia as a whole.

Based on the above information, a clear triangle emerges: in one corner of it Ukraine with its unique production, in the other Russia with its unwillingness to provide the rival with unique technologies and in the third China, which received all that was necessary, namely technical documentation and specialists , and, as a result, he does not want to pay money, and they will more than return all the funds that have been invested in the form of a penalty.
Ctrl Enter

We are in Yandex Zen
New plants and workshops in Russia in 2015 year
Overview of the activities of Russian shipbuilding enterprises in 2012
19 comments
Information
Dear reader, to leave comments on the publication, you must to register.