21 September 2013
279
As you know, Israeli military equipment designers have gained considerable experience in the field of creating highly protected military vehicles using as a base tanks: this is the Puma engineering vehicle (based on Centurion), Akhzarit BMP (based on captured T-55s), Nakpodon and Nagmash'ot armored personnel carriers (both also based on the Centurion tank). Now in Israel, a prototype of a heavy infantry fighting vehicle was created on the basis of the Israeli Merkava Mk1 main battle tank, which received the serial name "Namer" (Namer - Tiger). The first acquaintance with this machine occurred on March 7–10, 2005 in Tel Aviv at the Low Intensity Conflict 2005 arms exhibition. The prototype BMP "Namer", which was presented by Israel at the exhibition, according to the local representative of the editorial office of the popular JDW magazine, "is an exhibition model of technology with real components, which has passed all the necessary operational evaluation in a separate 84th brigade of the Israeli defense forces and will be used in the sector Strip after the exhibition. "


According to Western sources, in Israel, on September 2007, XNUMX, a five-year arms procurement plan was approved (earlier, the budget, like all other government spending, was drawn up strictly for one year). As local experts emphasize, this plan has one specificity - after many years of preference given to missile and aviation technology, the authorities today decided to first provide the necessary weapons and military equipment to their own ground forces and their armored base. Israeli experts note that such a turn is justified by the experience that was gained in the 2nd Lebanon war, which showed the Air Force’s inability to independently solve the complex tasks of combating perfectly disguised and fortified enemy positions. With all this, the ground forces suffered significant losses due to the poor protection of armored vehicles. In order to improve the situation, the Ministry of Defense allocated $ 1 billion for the purchase of several hundred new BMP “Namer”. 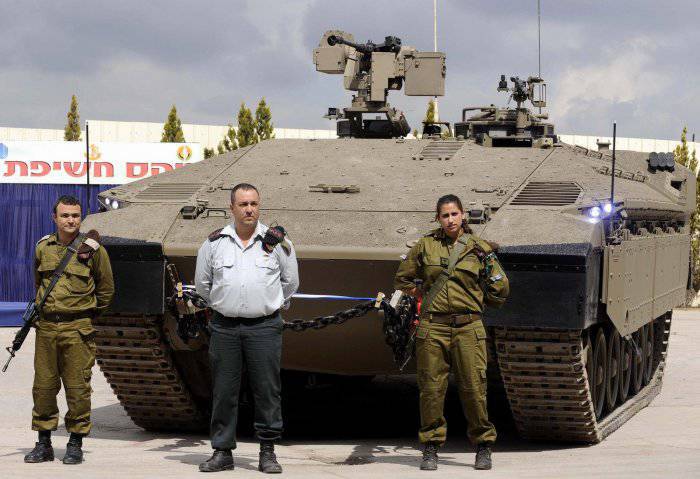 The prototype BMP "Namer" was made on the basis of the tank "Merkava" Mk1 by removing from it a tower with mounted cannon armament and technical equipment in the stern of the hull to prepare places for transporting 8-equipped infantrymen. In addition, the loading of a standard stretcher for the 1 of the wounded was provided (except for the landing force). Places still 3 crew members are located in the front of the hull. The paratroopers take and leave their seats through a special hydraulic ramp with a hydraulic drive installed, and the crew through the hatches in the roof. Periscopic tracking devices are located around the hatches, and in front of them are turrets for attaching weapons. The prototype presented at the “Low Intensity Conflict 2005” exposition was equipped with a 12,7-mm remote coaxial machine-gun radial rotation unit “Katlanit” manufactured by Rafael and a 7,62-mm manual-controlled machine gun. In the BMP used diesel power unit AVDS power 900 hp previously installed on the tank Merkava Mk1. Mounts for overhead dozer equipment or mine trawl are provided in the bow.

The BMP has a reinforced armored bottom protection (equipped with a mine guard system) and a hull upper hemisphere (multi-layer and posted booking). Frontal reservations are fully repackaged and enhanced, and the stern ramp has also been enhanced. Chassis and sides are locked folding iron screens. In the future, BMP is planned to equip the system of active protection "Trophy".

It is assumed that the serial version of the BMP “Namer” will be equipped with a weapon module with remote control of the state company “Rafael”, including (in different versions) 7,62-mm or 12,7-mm machine gun, 30-mm mechanical gun, 40-mm mechanical grenade launcher. With all this, the installation can be installed both on the roof of the troop compartment itself and on the turrets in the area of ​​the hatches. The design and creation of the first prototype of the BMP "Namer" was carried out by the Merkava tank development department of the Israeli Defense Forces. However, according to the Israeli military, a radical re-equipment of the Merkava Mk1 tank chassis led to significant costs, comparable to the creation of a similar combat vehicle from scratch (estimated 750.000 $). Thus, it was decided to develop a series of BMP "Namer" on the basis of the chassis currently manufactured by the Israeli industry Merkava tanks Mk4. 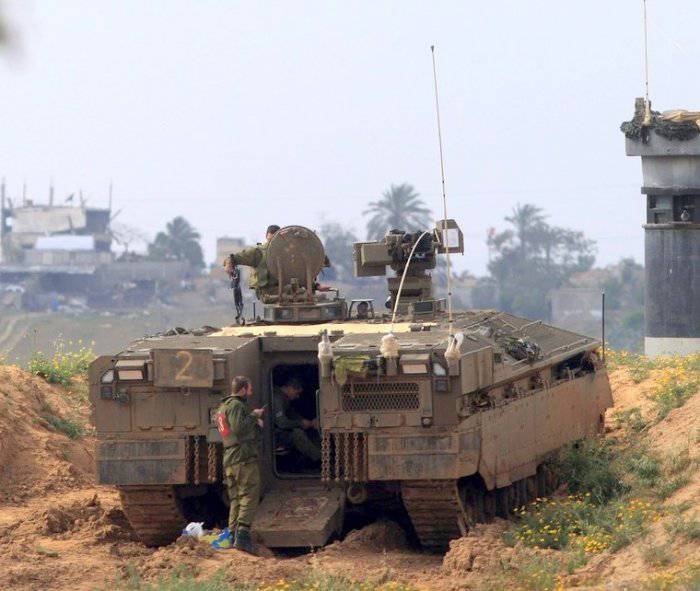 BMP "Timer", made on the basis of "Merkava" Mk4, is much more different from the prototype. At first, this applies to bevelled side protection panels on fenced shelves (valid with integrated dynamic protection). In addition, the combat vehicle received a full-fledged commander's tower and a new remote-controlled machine gun installation caliber 12,7 mm. For the likelihood of tracking from the troop compartment closer to the stern of the sides were provided protruding at an angle viewing glass blocks. Above them were placed special 6-barrels of smoke grenade launchers. From the tank "Merkava" Mk4 BMP also inherited the engine, box and chassis.

Currently, several samples of BMPs have already been manufactured, and they have entered the test service to the troops. The first cars are equipped with a diesel power unit with an HP 1200 power. Similar engines are used in tanks Merkava 3, but in the future will consider other options. By such options should include an improved propulsion system AVDS-1790. The total number of machines required for IDF is the Namer 600 BMP. 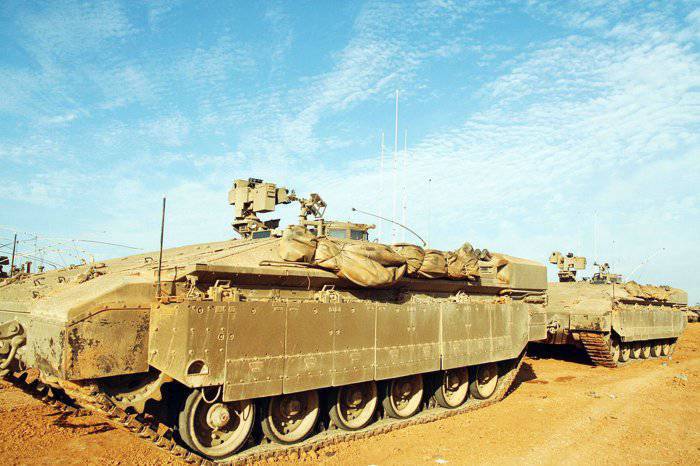