NATO in Afghanistan: Pros and Cons for Russia 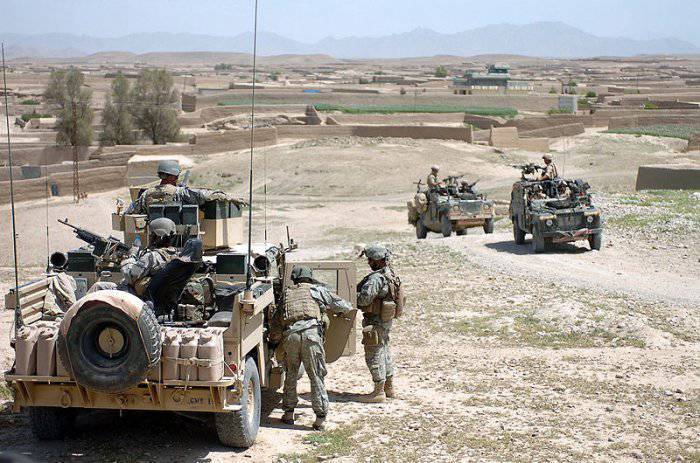 The presence of US and NATO troops in Afghanistan for the Russian Federation has two sides: positive and negative. Afghanistan is one of the regions of the planet where war has become ordinary life. So, in the 1978-1979 years there was a civil war, where the opposition was opposed to the communist government. Then the USSR was drawn into the war - on the side of the pro-Soviet regime, the USA, Pakistan and Saud - on the side of the opposition. This is the period of the so-called Afghan war of 1979 — 1989, the war could be ended and Afghanistan returned to civilian life if other people ruled the Soviet Union, but in the end M. Gorbachev betrayed the country, including the allied Afghan regime. The war escalated to the next stage: the troops of the Democratic Republic of Afghanistan (DRA) fought with the Mujahideen, who were still supported from abroad. The war went on from 1989 to 1992 years, the DRA showed high vitality, in the West it was believed that it would fall within a few months. The regime of Mohammad Najibullah is still considered the most popular in Afghanistan, for example, in 2008, one of the radio stations in Kabul conducted a survey among residents of the province of Kabul. Answering the question: “Which of the political regimes of the past and the present tense do you consider most to meet your interests?” 93,2% of Afghans called the pro-Soviet regime M. Najibullah.


With the fall of the People's Democratic Party and the departure of M. Najibullah (he and his brother were killed in 1996), peace did not come in the country, a new civil war began - detachments of field commanders of Mujahideen grabbed, the war became even more fierce, for civilians came bad times, people won from Kabul with the words: "Long live Najibullah!" This stage lasted from 1992 to 2001, during the struggle of field commanders, among them were two coalitions: the Northern Alliance (the most famous leaders are Tajik Ahmad Shah Masood, the Uzbek leader Abdul Rashid Dustumi), the movement of religious Islamic fundamentalists, the so-called Taliban . Interestingly, the Northern Alliance worked closely with Russia, Tajikistan, Iran, and Western countries, including the Central Intelligence Agency. In 1996, the Taliban seized Kabul and were recognized as the legitimate government of Afghanistan by three states - the United Arab Emirates, Pakistan and Saudi Arabia. The Northern Alliance retained control of the northern provinces of Afghanistan.

Interestingly, the Taliban showed themselves in general quite well: they established order in their control zone, successfully fought against the production and distribution of drugs. But, naturally, they could not restore full-fledged life - for this they needed the support of some powerful external force, like the USSR or the West and China. They kept afloat due to the support of Pakistan, Saudi Arabia for the first years, until a large-scale fight against drug trafficking, selling drugs, but this was not enough to rebuild the country and carry out large-scale infrastructure projects to raise, or rather, create a new national economy.

In 2001, after the famous September 11 terrorist act, the United States accused the Taliban of complicity in his organization and the concealment of bin Laden, Operation Enduring Freedom began, NATO forces, with the support of the Northern Alliance, beat the Taliban out of most of Afghanistan. 7 November 2001 of the year was captured by the last stronghold of the Taliban-Kandahar movement, which was the end of a short stories Islamic Caliphate Afghanistan. But then a new stage of the war began; Having suffered a direct defeat, the Taliban, having recovered from the first shock, went over to the guerrilla war, to sabotage, this war continues to the present. In this war, the Taliban are fighting the Karzai government and the forces of the western occupiers, and they are supported by a significant part of the population, at least morally.

The United States and NATO are planning to withdraw troops from Afghanistan, but in order to avoid shameful flight from the country, the Western bloc is implementing a plan to gradually transfer its military powers to the Afghan government of Karzai. But as long as it turns out badly, the Afghan soldiers and the police of the official government, trained and armed by NATO, do not show a desire to fight and die. They are an order of magnitude lower in their fighting qualities than the DRA troops. Karzai is also looking for a way out of the impasse, because people are more and more angry against NATO, who have already “distinguished themselves” in killing civilians, bombing villages, seeking support from China and Russia.

NATO’s withdrawal in 2010-2011 years, prior to the creation of a capable government and army, and for this, large-scale infrastructure projects in the economy must be launched (currently approximately 75% of the adult population works in the drug business) to make the population believe the government Taliban, threatens to repeat the situation 1989-1992's. Yes, and it is doubtful that Karzai will last so long, the Taliban without NATO will quickly capture most of the country. Therefore, Karzai is negotiating with the moderate wing of the Taliban in order to create a coalition government. The question is, will it be stable? After all, it is known that the Provisional, Coalition governments usually end up badly - with another confusion. Yes, and the Taliban is no longer a homogeneous force, some may enter the Coalition Government, while other, more radical groups will continue the war.

- Russia and other powers received a whole grouping of NATO troops from their borders. The United States, while in Afghanistan, can influence (which is what the example of Pakistan does) India, Pakistan, Iran, the countries of Central Asia, Russia, and China.

- The gigantic problem of drug trafficking, so after the start of NATO operations in 2001, there was an increase (in 2008 year) of opiate and heroin production in Afghanistan in 2 — 2,5 times, this is when the Taliban lost control over the territory of the state. And the “trace” of the CIA and Western intelligence services in the drug business is very well seen, so Pakistani General Z. Abaz, commander of Baluchistan’s Pakistani District, bordering the southern provinces of Afghanistan, said in an interview with SBS Australia that: “It’s a well-known fact that southern Afghanistan which was overrun by drug mills and drug dealers, was not subject to American bombardment at all. ” As a result, the drug business employs up to 75% of the adult population of Afghanistan, at present the European market is supplied with Afghan heroin by about 80%, in the States this figure has been reduced to about 35%. In total, Afghan heroin already accounts for two-thirds of the global volume of heroin production and more than half of the global opium market. Afghanistan has become the world's producer and supplier of drugs, this is his specialization at present.

And you can't blame the Taliban for this, they control a small part of this market, so, in the 2009 year, according to the UN, they earned only 150 million dollars from drug sales, and the total income of Afghan drug traffickers was this year 2,8 billion dollars. The main source of income for the Taliban was smuggling consumer goods from neighboring Pakistan.

- Afghanistan can be for NATO only the first step to consolidate in Central Asia, the same withdrawal of troops from Afghanistan, the US and NATO can combine with the strengthening of their positions in Central Asia, directly right next to our borders. 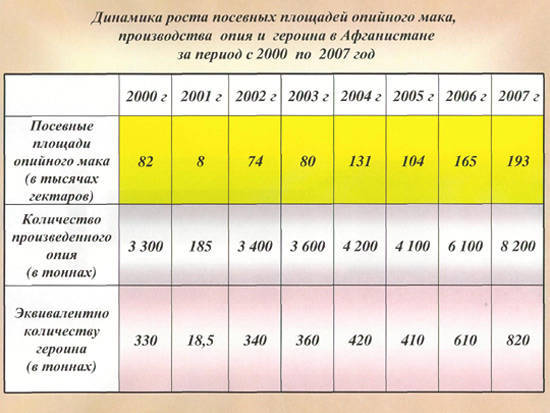 - While the United States and NATO in Afghanistan are the main enemies for Islamic radicals, including the Taliban, all attention is paid to them, the main resources are spent, they are at war with them. After their departure, it is doubtful that Karzai will last longer than a year. Afghanistan will again be under the control of the Taliban and possibly the reestablished Northern Alliance. Where will the Islamists pay attention after the victory in Afghanistan? China, India and Iran are powerful powers, and it’s definitely a defeat to go there, and the Taliban troops will not be able to withstand the powerful armies of the industrialized nations. The only way to the North, the benefit in Tajikistan, Kyrgyzstan, Uzbekistan, Kazakhstan, has already been created by the Islamist underground, the armies of these countries are weak and will not be able to stand alone against the Taliban and at the same time their Islamists.

Their only hope is to help Russia or to call back the NATO countries, and if they come, will they leave? In addition, the arrival of NATO, as part of a powerful contingent, rather than individual units, in these republics is already a direct threat to our “southern underbelly.” But the Russian Federation will have to either support the republics of Central Asia with all the remaining power - first of all, by the Air Force, mobile and attack units, such as airborne troops, marines, artillery, or forget about their existence, but for now the republic will be “wet down” and “Islamized” - to accept and equip millions of refugees, including Russians, to build by the type of tsarist and imperial Russia on the border powerful defensive lines, lines at the modern level. Perhaps restore armed Cossack troops, for their defense. It is likely that Northern Kazakhstan will have to take control in order to improve the defense capabilities of the southern borders: along the Caspian – Aral Sea – Balkhash – China line.

Although there is a chance that it will be possible to establish normal relations with the Taliban - sensible people are everywhere. Afghanistan needs tremendous help in rebuilding the national economy and peaceful life, and Russia can help, on reasonable grounds.

- The presence of the United States and NATO in Afghanistan leads to the dispersal of their forces, they lose the opportunity to conduct other campaigns and wars.

- The presence of NATO in Afghanistan is straining Pakistan, Iran, India and China, they are forced to seek an alliance with Russia in order to balance the power of the West together. This is confirmed by the recent arrival of the President of Pakistan to the Russian Federation and his proposals for expanding Russia's economic presence in Pakistan. 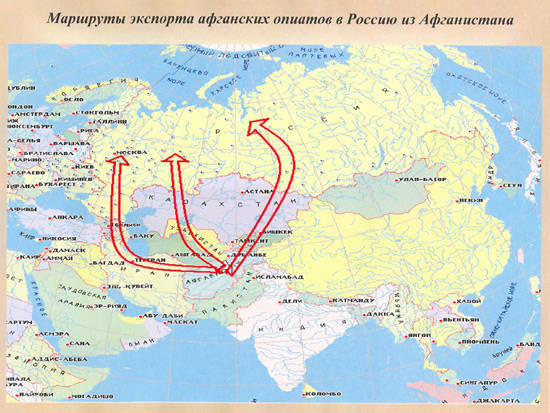 We are in Yandex Zen
"IG" in Afghanistan. Will the war come to Central Asia?
20 years after the war in Bosnia 1992-1995: rare photos of the conflict
3 comments
Information
Dear reader, to leave comments on the publication, you must to register.