7 2011 June
3
Rebelión: A few years ago, I talked with the foreign minister of a Latin American country about the US role in the world after the collapse of the Soviet Union. And then he said to me: “They consider themselves the masters of the world ...”, to which I replied: “Consider? No, they are. ” And they are constantly proving this in recent years, starting one after another of wars after they were left without an opponent who really threatened them with a global catastrophe.


After World War II, the USSR turned into a powerful adversary of the United States and was quite able to challenge them militarily. But after his disappearance, there will not be a single state in the world that can withstand an armed US attack. Their European allies only carry out orders.

The Americans were so clever in the matter of creating military alliances that they turned the one that was concluded with Europe and Canada into the North Atlantic Treaty Organization to withstand any enemy attack. They have turned NATO into a powerful military alliance, which points to a place for anyone who dares to cross the line they have marked.

The Balkans, the Persian Gulf, Afghanistan, Iraq and now Libya are the most eloquent examples of what this alliance is capable of. The West - as the industrialized countries of the northern part of the Atlantic call themselves - has such military power that in a matter of seconds, if, of course, it wants, it can cease to exist life itself on Earth, or demolish economically the other countries.

So, at present, this alliance is simultaneously bombing three different states. Bombs are dropped on the eastern part of Pakistan, Libya and Afghanistan. And no matter how strongly the world community protests, NATO planes continue to drop their deadly cargo on these areas of the Earth, without paying any attention to these protests.

NATO cynically laughs at the world community and even at those rulers whom this alliance brought to power, as, for example, in Afghanistan, where the so-called country's president Hamid Karzai, in a fit of absolute nonsense, said a few days ago that he was outraged by the death of civilians in the result of these bombings and more they will not allow from the alliance. “From this moment on, the air strikes on people's dwellings cease,” he said, as if making it clear that he was the one who led his country. He was simply ridiculed because less than an hour had passed, as a representative of the Western coalition forces said that the air strikes would continue, because they are justified from a military point of view and necessary to end the Taliban. 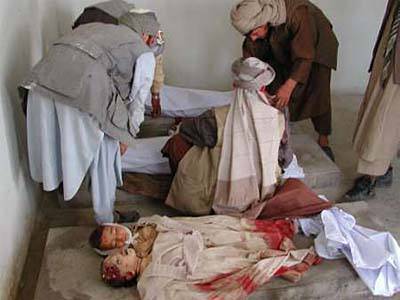 The same thing is happening in eastern Pakistan, where NATO drones continue to drop bombs to the right and left, not paying attention to the constant protests of the Pakistani authorities.

Russia has just protested the extension of the days of the bombing of Libya by 90, but the owners of the world are deaf to the voice of the Russian protest. They persist in using force to overthrow the Libyan leader, burning the country itself with thousands of bombs.

“Gaddafi must leave the country,” demanded the US President and French clown Nicolas Sarkozy. Taking the position of Napoleon, he offers the Libyan president to leave, threatening to kill him in Libya otherwise.

Western countries no longer have major enemies that could threaten them. Thus, now they threaten everyone else. What was in the beginning a defensive alliance, turned into an aggressive organization, which in fact went mad, leaving after a mountain of corpses and sowing destruction across the planet. How long will this madness last?

Rebelión publishes this article with the permission of the author through a Creative Commons license, respecting his right to publish it in other sources.