In the past two decades, the de-Russification of Russia has become more and more open. This process began as early as 20 in Soviet Russia, where, as part of the struggle against “damned tsarism”, the names of Pushkin, Lermontov, Tolstoy, Dostoevsky, Alexander Yaroslavich, Dmitry Donskoy, Alexander Suvorov, etc. were deleted from the textbooks and school programs. They demolished traditional moral values ​​for the peoples of Russia, Russians, tried to destroy the institution of the family. But at that time this “international” infection appeared.

The next attack on the people's consciousness was led by Khrushchev, the so-called “de-Stalinization-1”, within it not only erased the memory of the exploits of the Stalin era, but also continued a slower attack on the values ​​of the Russian people, eroded Russian culture. But the real “storming of consciousness” began in the years of “perestroika” and the period of “democratization”. In fact, at present, Russian culture is already blurred, turned into Russian-speaking, the Russianness of the Russian people itself has been lost. 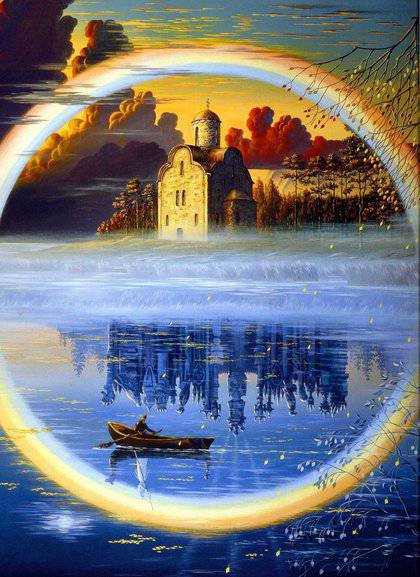 In the republics of the former Soviet Union, perhaps, apart from Belarus, not only “de-Stalinization” and “de-Sovietization” of the population, training programs were carried out, but also in fact “de-Russification” - including mass renaming of settlements, streets, names of natural objects. The Russians fled or were turned into "silent non-citizens", from which there is only one step to the "subhumans".

Full support for such actions is met in “enlightened Europe”, where, at the OSCE level, Stalin’s USSR was equated with Hitler’s Reich, where they blamed the outbreak of World War on two “powerful totalitarian regimes - Nazi and Stalin’s”, where they close their eyes to the tricks of neo-Nazis in the Baltic States, Ukraine, Georgia. In fact, we are already being asked to repent that we were killed a little during that war. Repent that we won. Well, after repentance will require compensation and territories.

And our (or ours?) Authorities are silent. After all, there is nothing for us to repent for, the Stalinist USSR is the period of the highest take-off of the achievements of Russian and other indigenous peoples of the USSR, the period when the infrastructure was created, due to which citizens of the countries of the former USSR still live. The time when the Soviet people committed four titanic feats: 1) during three incomplete five-year plans "healed the wounds" inflicted in the First World War and the Civil War, was able to catch up with the leading powers of the world, to prepare for the worst history humanity war; 2) was able to win in a fiercest battle, and during the war years he did not weaken, but only became stronger, having emerged from the war as a superpower; 3) was able to quickly restore the torn down; 4) didn’t stop in stagnation, but continued on to the Stars, a foundation was created for the nuclear missile shield and sword (thanks to which we can still live relatively calmly), the Space Program, the best education system in the world for people and many . others

Where is the propaganda of Russian values, Russian history, Russian heroes by our “national” channels ?! Why show broadcast awards Gorbachev av London, which for the majority of Russian citizens the enemy and the traitor of the Union State? Why do we need to show the wedding of the English princes or another Eurovision coven? These are not Russian values, this is all alien.

For two decades now they have been repeating (4 five-year plans) about “democratic values”, innovations ”,“ modernizations ”,“ optimizations ”,“ Putin's plan ”and so what? You can calculate how many thousands of schools, hospitals, libraries, museums, houses of creativity, military units, planes, helicopters, ships, tanks and so on, "optimized." And in the years of the "tyrant", the authorities reported how much was built, repaired in the country: factories, weapons, bridges, houses of creativity, youth. For two decades, not a single significant victory, only virtual projects, and the fact that Georgia won was not a victory, but a shame that she dared to attack. But catastrophes, accidents, terrorist acts of national scale, everyone will remember more than a dozen.

At the same time, there is financial support, from the outside and inside, of the national intelligentsia of small nations, while simultaneously de-Russifying them, reducing the influence of the Russian cultural field on them: films of ethnic orientation are being made, an “emancipatory” epic is being written about fighting the “Russian invaders”, the “national " story. Mines are being laid, which will simply smash the Federation building.

There is a further dismemberment of the Russian people, the super-ethnos of the Rus - not only did they create a separate “Ukrainian people”, create a “Belarusian people”, go on the formation of “Cossack peoples”, “Siberians”, soon it will reach the creation of a people “Vyatichi”, “Ilmen Sloven ”and so on.

We should not repent of anything, thanks to the Rus-Russia-USSR there are the current Baltic peoples (instead of “Germans or Swedes”), the state of Finland (and not the region of Sweden), Bulgaria, Serbia. The Central Asian states inherited all the infrastructure that allows them to exist until now. Thanks to Soviet technology, China has become a great power - having entered space using nuclear weapons. You can list for a long time ... We must remember the exploits of our people and know that we have nothing to repent of. Russia stood, stands and will stand against the hopes of its internal and external enemies.

We are in Yandex Zen
About Stalin and Khrushchev
On the other side of the "red" and "white." Report Izborsk club
13 comments
Information
Dear reader, to leave comments on the publication, you must to register.