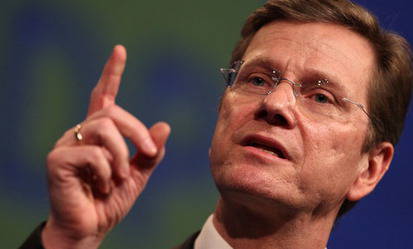 Germany does not intend to participate in the fighting in Libya. This was stated by German Foreign Minister Guido Westerwelle, who accompanies German Chancellor Angela Merkel during a visit to the United States that began today. One of the main topics of the talks in Washington will be the Libyan topic.


"This position of the federal government has remained unchanged," ITAR-TASS quoted Westerwelle.

At the same time, the minister declared Germany’s readiness to “render humanitarian aid” to the Libyan population.

Recall Germany from the very beginning refused to participate in an armed operation against the regime of Muammar Gaddafi. The German representatives, along with the Russian Federation, India, China and Brazil, abstained in voting on the UN Security Council resolution 1973, which allowed the air strikes on Gaddafi’s troops.

Germany also refused to participate in the naval blockade of Libya and withdrew NATO naval ships in the Mediterranean Sea.

In addition, Germany refused to discuss the proposal to supply the Libyan rebels weapons to fight with supporters of Gaddafi.

Foreign Minister Guido Westerwelle said: “We decided that the soldiers of the Bundeswehr would not take part in the military operation in Libya. But this does not mean that we will take a neutral position. We see Libya’s future without dictator Gaddafi. ” The Minister promised that after the fall of the Libyan leader’s regime, Berlin would provide humanitarian and economic assistance to the new democratic government.

We are in Yandex Zen
Germany will give Libyan rebels a loan of up to 100 million euros
Chronicle of the Libyan War
5 comments
Information
Dear reader, to leave comments on the publication, you must to register.