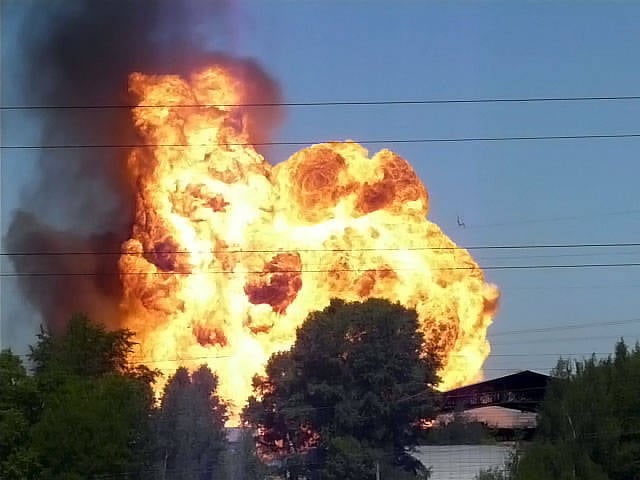 The 102 arsenal in Udmurtia, which exploded on June 3, contained shells recently produced on Izhmash for export to Venezuela, the FSB reported on Monday. It is still unknown where this party was and in what condition it is now. The investigation considers all versions of what happened, including arson.

On Monday, it became known that at the exploded arsenal in Udmurtia there were just manufactured ammunition intended for export.

“The shells that were made by Izhmash under the Venezuelan contract should have been sent there,” said Sergey Vertunov, head of the UFSB Udmurtia, at an emergency headquarters meeting in the district center Malaya Purga on Monday. He did not specify exactly where the shells were on the contract.

“At that temperature and the shells spread out, this whole batch is to be checked for defects. Certain and significant damage to the Izhmash plant could be inflicted, Interfax quotes Vertunov as saying.

Note, the factory "Izhmash" produces small arms. Of the ammunition in the plant’s products, only the 122-2M 152-X and the 155 / XNUMX-mm Krasnopol guided artillery-controlled XNUMX-mm projectiles are indicated on the company's site.

Recall, according to the Ministry of Emergency Situations, there were only 170,5 thousand shells stored in the warehouse.

Meanwhile, the head of the military investigation department for the Izhevsk garrison, Sergey Mayorov, told ITAR-TASS that the investigation was considering all versions, including arson.

In his statement, Mayorov did not rule out that during the preliminary investigation, the article on which the criminal case was opened may be retrained. The representative of the UK declined further comment. Currently, we recall, the case is under investigation for hours. 1 Art. 349 of the Criminal Code ("Violation of the rules for the treatment of weapons and objects of increased danger to others ").

The fact that state of emergency at the arsenal could have happened as a result of malicious intent was announced earlier by Colonel-General Leonid Ivashov, president of the Academy of Geopolitical Problems: “Since corruption is more common in the army than in all Russian structures, it’s not possible that somewhere trying to cover up the traces after the sale of ammunition or something else like that, ”he said in an interview with the VIEW newspaper.

At the same time, in the republican administration of the FSB, nevertheless, they excluded one version, stating that it was not necessary to speak about the terrorist act.

It should be noted that, as a rule, old, often exhausted, ammunition has often exploded at arsenals and ranges, often as a result of a violation of the rules by servicemen. In particular, in the state of emergency in Bashkiria, which happened at the end of May, they accused Private Sergei Denyayev, who, according to the investigators, threw the cartridge case with the wrong detonator cap. Experts point out that this is due to thoughtless reductions in services responsible for the storage and disposal of ammunition.

Who will remove the shoulder straps

On Monday, the official representative of the military department for the first time commented on the issue of the responsibility of military officials for what happened.

The Defense Ministry recalled that “in order to fully and objectively investigate the causes and circumstances of the incident,” a commission of the Russian Defense Ministry was sent to the Central Military District under the leadership of Colonel-General Valery Gerasimov, Deputy Chief of the General Staff of the Russian Armed Forces.

Only after the end of the inspection will specific decisions be taken regarding the perpetrators, including personnel ones, the official said.

Earlier, the source ITAR-TASS reported that the head of the Main Rocket and Artillery Directorate (GRAU) of the RF Ministry of Defense and the deputy commander of the Central Military District - the head of the missile and artillery service will be presented for dismissal.

# {weapon} At the same time, the source RIA "News»Noted that the responsibility for the explosions could not lie with the Ministry of Defense City Army. “The military arsenals in the process of reforming the Armed Forces of the Russian Federation were transferred from central subordination (GRAU) to the commencement of the district command, which means that the responsibility for the state of emergency on the 99 and 102 arsenals lies primarily with the command of the Central Military District and the leadership of these bases”, - he said.

According to him, Major General Yuri Svintsov, the command of the Central Military District and, in particular, the district logistics committee of the district, most likely, will be mentioned in the report to the Minister of Defense as officials responsible for the arsenal bombings. “The most likely candidates for submission for dismissal on the basis of the commission’s work are Deputy Commander of the Central Military District for Material and Technical Support, Major General Yuri Svintsov, as well as the commanders of the Defense Ministry’s 99 and 102 arsenals,” the source said.

According to the newspaper VIEW, 3 of June, Russian President Dmitry Medvedev did not rule out that “we will have to remove the shoulder straps” from officials of the Ministry of Defense in connection with the emergency in Udmurtia and in Bashkiria. “Two times is already a system. Prepare me suggestions on who should answer for this and how. If they don’t understand everything in an amicable way, then everything was fine for two years, which means that they will have to remove epaulets again, ”said Supreme Commander-in-Chief Defense Minister Anatoly Serdyukov.

The fire and ammunition explosions at the 102 arsenal of the Ministry of Defense in Udmurtia in 30 km from Izhevsk began on June 3 afternoon. Around 30, thousands of people were evacuated from nearby settlements.

According to the latest data, 100 people suffered as a result of the incident. According to the Ministry of Health of Udmurtia, more than 2 thousand people applied for medical assistance. Two elderly people died from stress caused by emergency, but the Ministry of Defense considers it inappropriate to link these deaths directly to fire and explosions. One conscript went missing.

On Monday, the Minister of Construction of Udmurtia Alexey Shikalov said that the damage to the housing stock amounted to 1 billion rubles. He noted that as a result of a state of emergency, housing facilities in 32 settlements were damaged. The builders examined the 5821 house, of which 2862 was damaged. The houses were broken, the roofs were torn down, some walls collapsed. At the same time, Shikalov said, until the damage caused to commercial objects was calculated. Also, damage to 27 houses located in the military camp is not taken into account.

Meanwhile, there were reports of looting facts: “Currently, two criminal cases have been opened on the facts of thefts. In the first case, the marauder stole alcohol-containing products, in the second - household appliances from the apartment, ”the Udmurtia Ministry of Internal Affairs said in a statement. As a result of operational activities, the suspect in both thefts was detained, the department said. It turned out to be a 28-year-old young man previously convicted for committing property crimes. Stolen seized. In law enforcement agencies note that the mass cases of looting is not allowed.