7 2011 June
0
The Molotov Line is a fortification system built by the USSR in the 1940-1941 years along the new western border, after the Soviet Union annexed the Baltic countries, the western regions of Belarus and Ukraine, and Bessarabia. After receiving the new lands, the Stalin Line lost its significance, it was necessary to build a new line of fortifications at the new border, which was called the Molotov Line. According to one of the opinions, the line got its name due to the fact that the change of borders was a direct consequence of the Molotov-Ribbentrop Pact. This name is informal in nature and has become widely used comparatively recently.


The line was built from the Baltic Sea to the Carpathians and included 13 SDs, most of which covered about 100 km. state border. The line included the following fortifications: Telšiai, Shaulyaisky, Kaunas, Alytus, Grodno, Osovetsky, Zambrovsky, Brest, Kovelsky (Lyubomlsky), Vladimir-Volynsky, Strumilovsky, Rawa-Russian, Peremyshlsky. The fortifications on the new border were comparable in quality and quantity to the best lines of defense of the Second World War. The number of garrisons DOTov depending on their type ranged from 8-10 to 30-40 people. Field filling of the URs should have been provided by rifle army units. As of 22 June 1941, of the 5807 pillboxes scheduled to be built on the Molotov Line, only 880 was completed. UR readiness was estimated at an average of 15-20%. It is worth noting that in this assessment of combat readiness there is a share of guile, we will talk about this in more detail later. 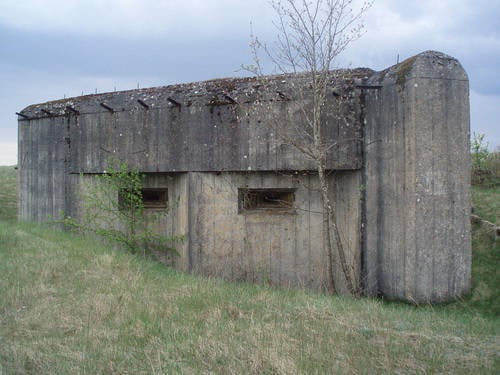 One of the pillboxes of the Molotov line in the Baltics
Sometimes the class M-4 was also used. Such bunkers were of two types: light machine gun with a single embrasure and false targets. Light machine gun pillboxes had the name "Mosquito", they installed only 1 machine gun "Max". Usually they were installed in the band of the supposition and were the first to open fire on the enemy. After the position was detected by the enemy, the calculation retreated to the main line of defense. False structures of class M-4 were either a simple concrete box with no equipment, or only a front wall in which the embrasure was simulated.

In addition, firing points were additionally assigned names that clarified the direction of their fire. DOT - frontal firing point, caponier - flank fire in 2-x directions, polukaponir - flanking fire in one direction, blockhouse - all-round fire. In 1938, this qualification was even more complicated and began to indicate the nature of the weapons installed, for example, the OPPK, a cannon-machine-gun polukaponir.

Most of the long-term fortifications were intended for the installation of machine guns and had many similarities. Most of the machine gun pillboxes had 2 combat dungeons, 2-3 embrasures, a separate room for an observer with a periscope, an anti-chemical vestibule and an entrance vestibule. The Tambour before the entrance to the DOT was shot through by the fire of a manual machine gun through a special loophole and was built in the form of a dead end with a hole or a throughperder, which ensured the reduction of the impact of the blast wave on the entrance door. DOT was equipped with a standard set of equipment: air filtration system, electric generator, chemical protection, tanks for water, cooling machine guns, telephone and radio communications. The rest room for the garrison was absent in most cases, but dugouts were built for this purpose near the firing point. 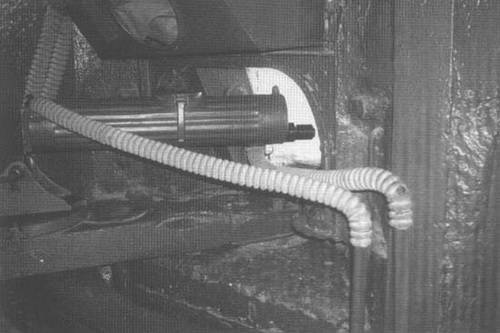 Maxim machine gun with water cooling pipes
Most of the machine gun pillboxes armed with 7,62-mm machine guns "Maxim" arr. 1910 of the year. It was rather heavy and outdated. weapon, but it proved its reliability to all and had a rate of fire in 500-600 shots per minute. Due to the fact that the machine gun had water cooling, a system of pipes connected to the water tank was installed in the DOT. With their help, struggled with overheating of the machine gun during the shooting. The machine gun "Maxim" was quite a noisy weapon. The roar from his shooting did not allow the use of fire control with the help of the traditional system of voice negotiation tubes. To solve this problem, engineers had to create a light fire control system.

In addition to machine guns, artillery buildings were also built in the USSR, mainly for the installation of 76,2-mm guns. Most often, the guns were installed in double-decker bunkers. On the lower floor there was a filtering unit, a power plant and an ammunition depot. The upper floor served to accommodate combat casemates. Most often, 2 implements were installed in adjacent casemates, one of which was pushed slightly in relation to the other. In form, such structures were either caponier or polucaponira. Steel inner and front doors were used as protection against infantry, although in practice, if enemy infantry approached close to such an artillery point, its fate was predetermined.

The embrasure was equipped with an armored frame with anti-bristle projections. It installed a ball mask installation, which provided guidance to the gun in two planes. Installed aiming devices allowed the gunner to recognize targets visually, while advanced artillery observers were often used. The gun was equipped with a device for removing spent cartridges and a sliding mechanism.

At one time, only machine guns and caponier guns were used on the Stalin line, but soon there was a need to strengthen anti-tank defense. As a result, many structures were created in which 45-mm guns were installed, which at that time could deal with all types tanks. As in the case with heavier 76,2 mm guns, the 45 mm anti-tank gun was mounted in a ball-mounted installation with a special armored frame, which allowed minimizing damage from ricochets. The gun was mounted in a pair with a 7,62 mm Degtyarev machine gun and was guided in two planes manually. A telescopic sight was used to search for targets. The trigger mechanism was made in the form of a pedal, and spent cartridges rolled down a special gutter into a pipe and then were thrown out. The gun was also equipped with flexible rubber hoses, which were designed to remove harmful powder gases from the bunker. 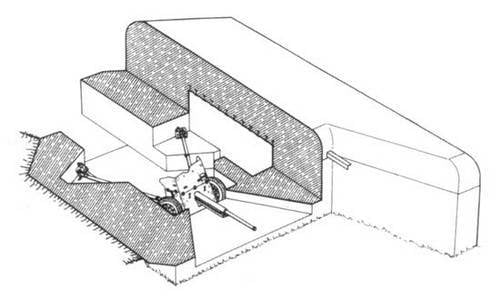 Shelter for conventional field 45-mm PTE guns
It is worth noting that such a setup was quite complicated and expensive, so very often they resorted to a simpler solution, which, moreover, was much cheaper. A reinforced concrete shelter was built for a conventional 45-mm field gun, which fired through an open embrasure.

To the issue of line readiness

Many sources mention only that 880 fortifications were fully prepared, and the total readiness of the EAs was only 15-20%. In these statements there is a certain amount of cunning. Back in April, 1941 Zhukov ordered that all the built but unarmed fortifications in the new URs had armor doors installed and conventional field armament mounted. These works received priority over the installation of power equipment, communications equipment and anti-chemical protection. As a result of these efforts, at the time of the onset of the German attack, about 2300 structures were considered combat ready.

If you look at the problem, a number of interesting details will open even wider. For example, in the 4 issue of the Military Historical Journal for the 1989 year (the press organ of the USSR Ministry of Defense) a table with numbers was placed that reflected the state of the URs on the new border on 1 June 1941. So it contained information that in Brest Ur 128 pillboxes were completed. At the same time, information on the completion dates is usually not given anywhere. The construction of pillboxes in the Brest UR should have been completed on July 1, 1941. Work on the construction of a fortified area was in full swing from morning to evening.

As Sandalov wrote (at that time the chief of staff of the 4 Army, in the zone of which Brest UR was located), “all the engineer units of the 4 Army and the 33 Engineer Regiment of the district subordination were involved in the construction of the Brest Fortified Area. In March-April, 1941 was additionally attracted to the works of 10 from the local population and from the 4 thousand from the local population. From the beginning of June, the 2 battalion from each rifle regiment of the division was involved in the construction of fortifications. ” All this suggests that by June 22, most of the 380 planes planned for erection of DOTs were ready or almost ready. 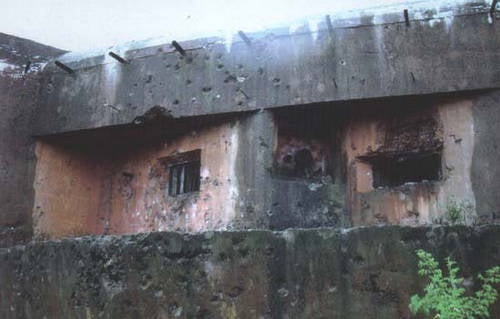 Pillboxes of the Brest UR with traces of shelling
For each kilometer of the Brest UR front, there were approximately 3 concrete boxes dug into the ground, the walls of which withstood heavy German implements. Of these, one fully built and equipped accounted for 2 partially incomplete. All this was in addition to the natural obstacle in the form of the Bug River. Even having placed usual rifle platoons with machine guns in unfinished pillboxes, it would be possible to create a continuous zone of fire destruction.

However, in the German reports for 22 June, no one will find information about the battles at the breakthrough of the line of the Brest Ur. Only one stingy record: "The border fortifications are broken in the sections of all corps of the 4 Army". Of course, fighting on the line of the fortified area was going on, but the Germans simply did not pay much attention to them. For example, until June 30, 4 of the bunker were held near the Polish town of Siemiatycze, in which the soldiers of the 3 squadron of the 17 th machine gun battalion of the Brest UR defended. The trouble is that most of the 17 and 18 personnel of the machine gun battalions of the Brest UR in the morning of June 22 departed in the direction of Vysokoy, where the headquarters of the 62 st. It was with such a calm and melancholic record that the Chief Officer of the 4 Army, Sandalow, noted the fact of mass retreat of the troops in the first hours of the war.

The Molotov Line was overcome by the enemy rather quickly, not because it was not completed, but mainly because it was not occupied in time by the troops. The close location of the fortifications to the border, panic and confusion caused by the suddenness of the attack and the fact that the construction and engineering equipment of the perpendicular have not yet started, was fatal here. Minefields, engineering barriers, as well as masking of bunkers were not completed.

We are in Yandex Zen
Diplomats of the People's Commissariat of Defense: on the eve and during the war
Molotov-Ribbentrop Pact - the policy of pragmatism
Add a comment
Information
Dear reader, to leave comments on the publication, you must to register.