4 2014 June
20
In recent months, an interesting armored vehicle appears in the promotional materials of the Ukrainian defense industry from time to time. This is a Belgian-made SIBMAS armored personnel carrier with a CMI Defense LCTS90 turret. Ukrainian participation in this project is the development and manufacture of guided weapons. The LCTS90 combat module can use Falarick 90 anti-tank guided missiles developed by the Luch Kiev design bureau. It is in this advertisement that the Ukroboronprom concern uses photo and video materials with an armored vehicle based on Belgian developments. For example, at the end of May, another video was published, which shows the launches of the Falarik-90 rocket from the barrel of the gun-launcher of the LCTS90 turret. 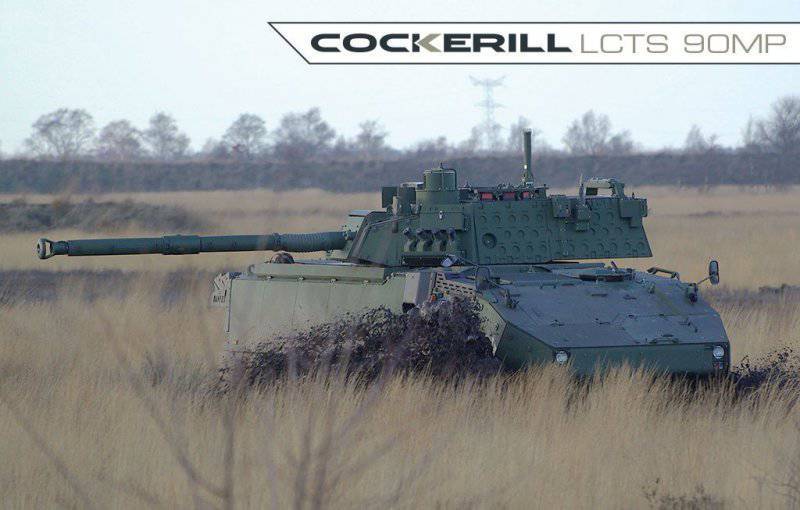 The first reports of the arrival of the SIBMAS armored personnel carrier at one of the Ukrainian factories appeared last spring. As follows from the available information, in the future, experts from Belgium and Ukraine conducted a series of test works, the purpose of which was to check the applied technical solutions. One of the results of these tests were photographs and videos published for promotional purposes.

The base component of the armored vehicle being tested, the BIB SIBMAS, is a rather old development of the Belgian industry. The SIBMAS project was created by BN Constructions Ferrovaireset Metalliques in the mid-seventies. Tests of the prototype SIBMAS car at the Belgian test sites started in 1976, and after a few years Malaysia showed interest in this armored vehicle. According to the test results in 1981, the Malaysian ground forces ordered almost two hundred Belgian vehicles, some of which are still in service.

BIB SIBMAS is a wheeled armored vehicle designed to transport soldiers and provide fire support. The machine has an armored hull protecting the crew and units from armor-piercing bullets of caliber up to 7,62 mm. A characteristic feature of the armored hull is the glazing of the workplace of the driver. The driver is located on the longitudinal axis of the car and to observe the road has a relatively large "wheelhouse" with large glass windows. Apparently, the Belgian designers "spied" on the idea of ​​such glazing among the South African colleagues who developed the Ratel BTR. 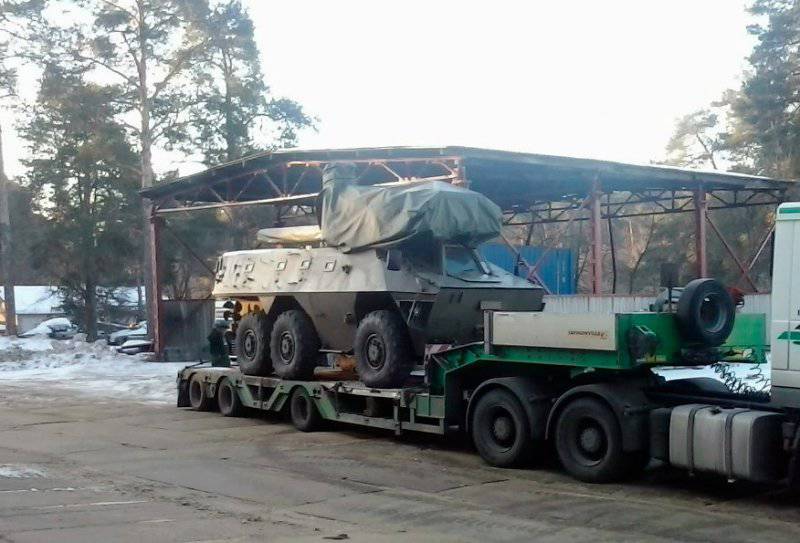 In front of the hull BTR SIBMAS located driver's workplace. The middle part is given under the combat and airborne squad. Doors for landing and disembarking soldiers are in the middle of the sides and the stern sheet. The driver can also use their own sunroof. The engine and part of the transmission units are located in the rear of the hull, with a shift to the port side. This arrangement of the engine compartment allowed us to leave a small passage at the starboard side leading to the aft door. The troop compartment holds 9 people with weapons. Six are located in the middle part of the body facing the sides, three in two rows of seats. Three more seats are in the aisle to the aft door. In the sides and doors are provided viewing devices and installations for firing from personal weapons.

SIBMAS armored personnel carriers are equipped with a MAN D-2566 six-cylinder turbo-charged diesel engine with an 320 horsepower. With a maximum combat weight of the machine no more than 17,5-18 tons, the engine is able to provide power density at the level of 18-19,5 hp. per ton. The diesel engine is installed in the housing with the possibility of quick replacement. According to the manufacturer, two technicians, using a light tap, can carry out all operations for replacing the engine in just 30 minutes. To facilitate the work in the roof of the hull above the engine there is a large hatch that allows access to any part of the engine compartment.

Transmission with an automatic six-speed gearbox distributes engine torque to all six wheels of the car. With such a chassis, an armored personnel carrier can reach speeds of up to 100 km / h on a highway. For movement on water in the aft part of the hull two propellers are provided. The maximum speed of the car on the water - 11 km / h. The volume of fuel tanks allows the BIB SIBMAS to cross the 1000 km at one refueling station.

The shoulder strap of the SIBMAS armored personnel carrier tower can be used to install various combat modules. On a machine tested on Ukrainian test sites, a Cockerill LCTS90 Belgian development tower was installed. This combat module was created in the mid-nineties and is intended to arm various middle-class armored vehicles. It can carry almost any armored vehicle with a suitable diameter of shoulder strap. The combat module is equipped with all the necessary equipment to detect and attack targets. 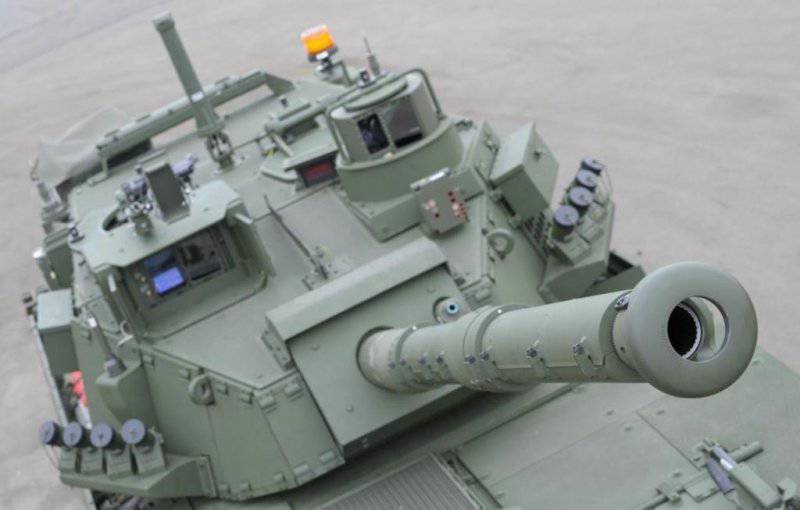 Inside the hull of the tower with anti-bullet reservation are jobs of two crew members, equipped with all necessary devices. The gunner and the commander of the combat vehicle have observational devices and sights. Thus, the gunner's sight has a day and night channel, and is also equipped with a laser rangefinder and a stabilization system. The weapon control system allows to obtain data from the available measuring devices and to make corrections for firing, including for firing on the move and at a moving target.

The main weapon of the LCTS90 turret is the Cockerill Mk 8 rifled 90 mm gun with a barrel length of 48,5 calibres (4,365 m). It is claimed that this gun surpasses 105 mm in its effectiveness tank cannons of old models and allows you to fight with medium tanks created several decades ago. The gun is equipped with a single-chamber muzzle brake and ejector. To improve the characteristics of the barrel, the bore has grooves with varying steepness, from 6 ° in the breech to 9 ° at the muzzle. The ammunition stock of the Mk 8 gun includes five types of shells, including high-explosive shells and armor-piercing shells. The maximum range of fire when using high-explosive shells can reach 7,8 kilometers (elevation angle of the barrel 20 °), but in this case only an area target can attack.

As an additional weapon on the tower Cockerill LCTS90 used two machine guns. One of them, caliber 7,62 mm, is paired with a gun. The second is proposed to be mounted on the roof of the tower and used as anti-aircraft. At the request of the customer large-caliber weapons can be mounted on an anti-aircraft installation. In addition, the tower provides space for two four-barreled smoke grenade launchers.

At the end of the two thousand years, the Belgian company CMI Defense appealed to Ukrainian colleagues from the GCKTB “Beam” (Kiev) with a request to develop an anti-tank missile system to equip its promising technology. Thus began the project Falarick, the result of which was the emergence of two missiles with different characteristics and control equipment for them. The LCTS90 turret, mounted on the SIBMAS armored personnel carrier seen on Ukrainian ground, has the ability to use Falarick guided missiles in the version for 90-mm guns-launchers.

The guided missile has a body with a diameter of 90 mm and a length of about 1 meter. Ready to use weight of ammunition is about 20 kg. The Falarick 90 guided missile was created simultaneously with the Falarick 105, because of which common ideas and components are used in the design of both products. The Falarick 90 rocket is designed to launch from a Cockerill Mk 8 gun, which affected its appearance. For placement in the barrel of the launcher-launcher wings and rockets made folding. Until launch, these parts are pressed to the surface of the hull and must be opened after the rocket leaves the gun.

According to reports, the Falarick 90 anti-tank missile is capable of striking moving and stationary targets at a distance of up to 4 kilometers. A flight to the maximum range takes 14 seconds. The rocket carries a tandem cumulative warhead, which is said to be capable of penetrating up to 500 mm of armor for dynamic protection.

When creating a new rocket, Ukrainian designers took into account the Soviet experience in creating such systems. To improve the efficiency of the use of the Falarick family of rockets, semi-automatic laser beam guidance is used. In the tail of the rocket there is a special lamp, the light of which allows the automation of the missile complex located on the combat vehicle to determine the position of the ammunition in flight. Near the lamp is a photodetector of laser radiation, tracking the control beam. The principle of operation of the guidance system is as follows: the gunner holds the target at the crosshairs of the sight, and the automation installed in the LCTS90 turret tracks the position of the rocket and corrects its flight path using a laser beam.

The advantages of such guidance systems include good accuracy of hits, as well as high noise immunity, since a narrowly focused control laser beam hits the photodetector in the tail section of the rocket. As a result, in most cases the enemy will not be able to suppress the control beam and disrupt the missile guidance. Similar laser beam guidance is used on several Soviet and Russian anti-tank missile systems. Several years ago, the Ukrainian designers were able to create such a system.

Belgian gunsmiths position their combat module LCTS90 as a universal remedy for various armored vehicles that must fight against tanks of outdated models. The characteristics of the Cockerill Mk 8 cannon are such that it can pierce the armor of T-55 or M60 tanks. As a result, this weapon or combat modules equipped with it may be of interest to developing countries that wish to upgrade their fleet of military equipment, but at the same time do not need means to deal with modern enemy vehicles. The main sales market for CMI Defense's combat modules with 90-mm cannons are South America, Africa and part of Asia.

The use of guided weapons with a rocket launched through the barrel of a cannon on a combat module can significantly improve its characteristics and also affect attractiveness for potential customers. Thus, the SIBMAS armored personnel carrier with the CMI Defense LCTS90 turret and Falarick 90 missiles may be of interest to some foreign countries. However, information on orders for such equipment is not yet available. Perhaps, potential buyers are stopped by an outdated base machine, which no longer meets a number of modern requirements, although they can only order combat modules and install them on existing or desired equipment. 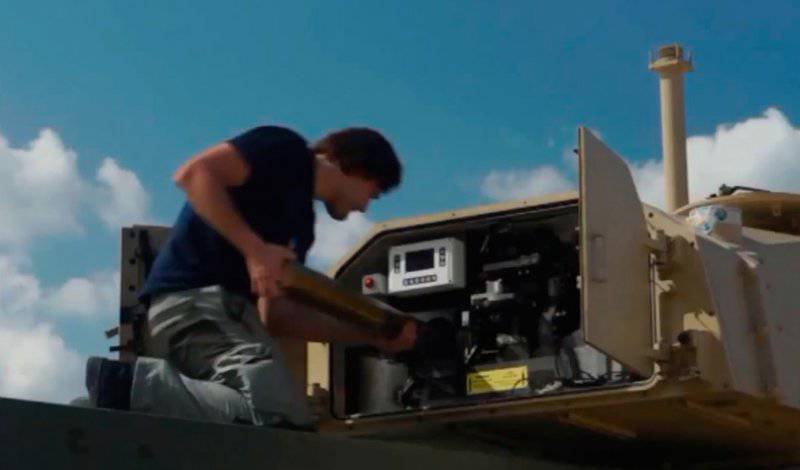 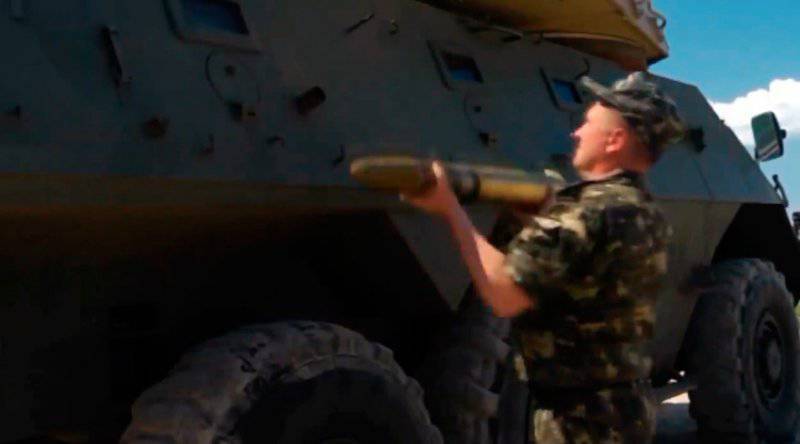 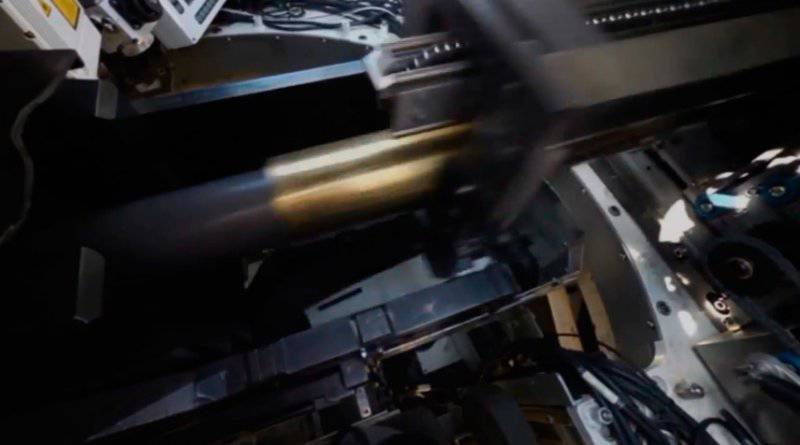 Anyway, so far the BIB SIBMAS with the Belgian tower and Ukrainian missiles exists only in the form of a few prototypes, at least one of which went to Ukraine last year. The future prospects of this joint project are not completely clear.