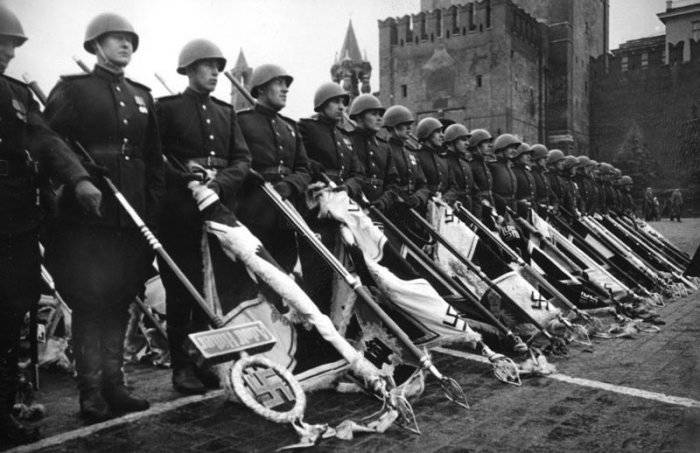 Victory is a monument to those who did not return from the battlefield, defending Moscow, Leningrad, Kiev, Sevastopol, Odessa and Stalingrad, defending every inch of their native land.

The years will flash, and the significant dates of May 9 and June 24 will not be erased in the memory of mankind. They will always be reminded of the courage and invincibility of the people.

Characteristically, this order was issued on the fourth anniversary of the German attack on the country. To prepare for the Parade, as Stalin insisted, was given one month. The Victory Banner was decided to carry the front passages ahead. By the way, the flag was brought to Moscow from Berlin along with captured German flags and standards. A guard of honor was appointed to accompany him and the meeting.

Almost all of the Moscow sewing factories prepared ceremonial uniforms for soldiers, officers and generals. It was sewn in the studio. A plan for the festive fireworks and illuminations was developed. In late May and early June, intensive preparations for the Parade continued. The rehearsal of the infantry units took place on the Khodynka field, in the region of the Central airfield. And the garden ring - from Krymsky Bridge to Smolenskaya Square - was reserved for the participation of a training ground for military equipment. Training was carried out only at night. There were problems with military equipment. The fact is that in the area of ​​the Historical and Kremlin passages, wooden floorings were laid, however, heavy artillery and Tanks just smashed them. I had to replace the flooring with strong thick birch and oak boards assembled in slabs. To avoid slipping, all roads along the route of the equipment were sprinkled with sand. 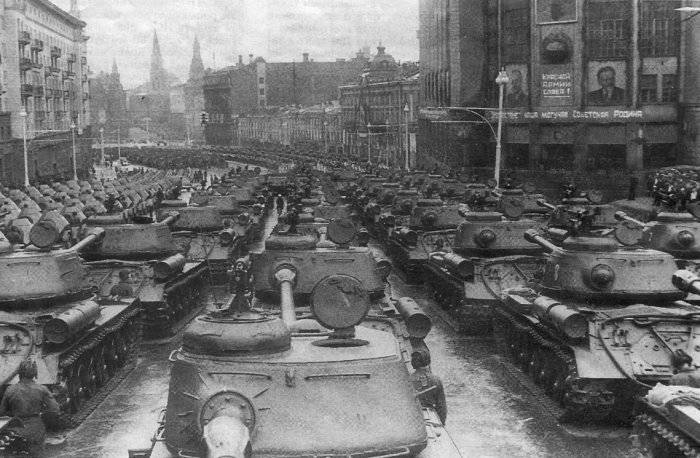 For the movement of tanks set a special mode. They walked to the square through the city center at intervals of 20-70 m, depending on the condition of the bridges, in one row and at a speed of no more than 5 km / h.

Much attention was paid to the cultural recreation of soldiers - they went to concerts, performances, movies.

In mid-June, Stalin summoned Zhukov to his dacha and asked him if he had not forgotten how to ride a horse? Zhukov replied that he had not forgotten how. Then Stalin instructed him to take the Victory Parade instead of himself, saying: “I am already old to accept parades. Take you, you are younger than me. " Zhukov was then 49-th year. 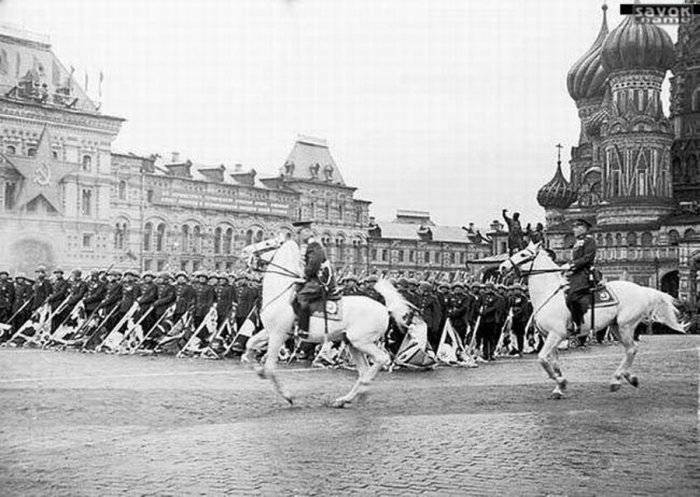 The construction of the parade was determined in order of the general line of the existing fronts during the war. For each combined regiment, military marches were specially chosen, which the personnel really liked.

The penultimate rehearsal for the Victory Parade was held at the Central Aerodrome, and the general rehearsal took place on Red Square. In a short time all the free shelves were adequately prepared. 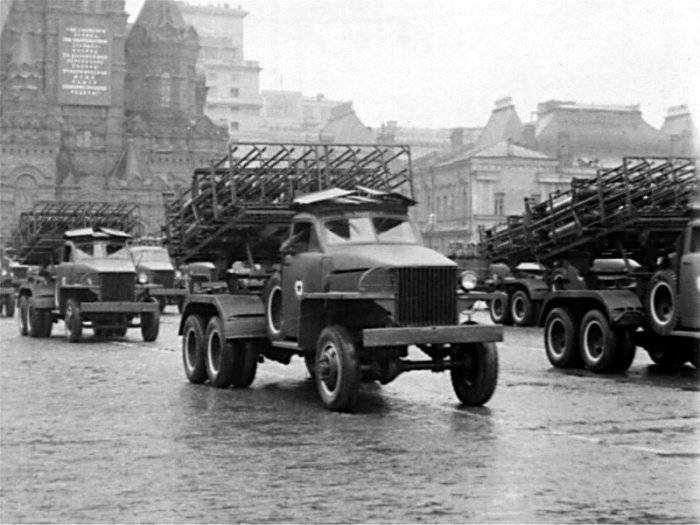 That unforgettable historical morning June 24, 1945 to 9 o’clock all guest stands were filled. In the ranks froze ten free regiments of ten fronts.

A few minutes before ten o'clock in the morning, the commander of the parade, Marshal of the Soviet Union Konstantin Rokossovsky, went to Red Square on a raven horse.

Almost simultaneously, the leaders of the state headed by Stalin rose to the Mausoleum.

In 10 hours, Rokossovsky gives the command: “Parade, attention!” The gate of the Spasskaya Tower opens and Marshal of the Soviet Union Georgy Zhukov quickly and festively appears on a snow-white horse. 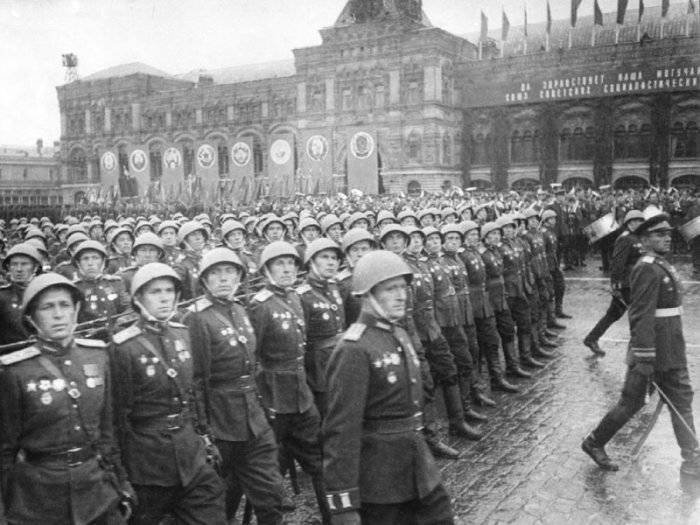 The giant joint military orchestra broke the hymn of Mikhail Glinka "Glory!" It was performed by 1400 musicians under the baton of Major General Sergei Chernetsky.

The marshals approached the central podium, and Rokossovsky reported on the readiness of the parade. Both begin a solemn detour of the troops.

Stopping in front of groups of columns, Zhukov congratulates the participants in the parade on their victory over Nazi Germany.

Zhukov rises to the Mausoleum and makes a historic speech about the role of the people and the army in the Great Victory. After a powerful three-time “Hurray!”, The anthem of the Soviet Union sounded, then 50 thundered volleys of artillery salutes, and, accompanied by marches of the orchestra, the ceremonial passage of troops began. 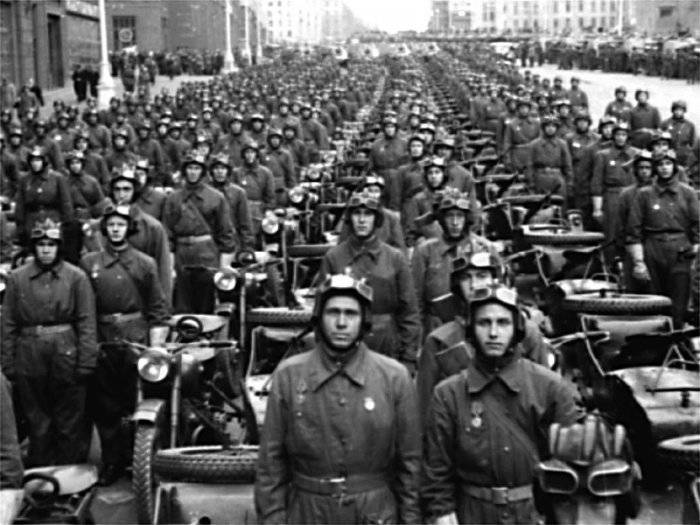 The ceremonial march of the regiments is carried out in the order in which they were located during the war - from north to south. The first is the regiment of the Karelian Front. He appeared at the Mausoleum in 10 h. 30 min. Ahead - Marshal Kirill Meretskov. Behind him the Leningrad Front, led by Marshal Leonid Govorov. Next - the regiment of the 1 of the Baltic Front, commanded by Army General Ivan Bagramyan. Before the consolidated regiment of the 3 of the Byelorussian Front was Marshal Alexander Vasilevsky. The regiment of 2 Belorussian was led by Deputy Marshal Rokossovsky Colonel-General Kuzma Trubnikov. Ahead of the 1 Belorussian regiment was the deputy front commander Marshal Zhukov, Army General Vasily Sokolovsky. Then there was a regiment of 1 Ukrainian, led by Marshal Ivan Konev. The front flag was carried three times by the Hero of the Soviet Union Alexander Pokryshkin. The regiment of 4 Ukrainian was headed by General of the Army Andrei Eremenko. Behind him, 2-th Ukrainian, with his commander, Marshal Rodion Malinovsky, walked in a precise order. And, finally, the southernmost of the fronts, 3-th Ukrainian, with Marshal Fedor Tolbukhin ahead. Seamen led by Vice Admiral V. Fadeev locked the front door. In each regiment, the first three ranks of the soldiers carried the battle banners of the divisions with a large number of orders and ribbons.

A special column were representatives of the Polish Army. The ceremonial march was attended by troops of the Moscow Garrison and District, the consolidated regiment of the People's Commissariat of Defense, followed by the military academies. 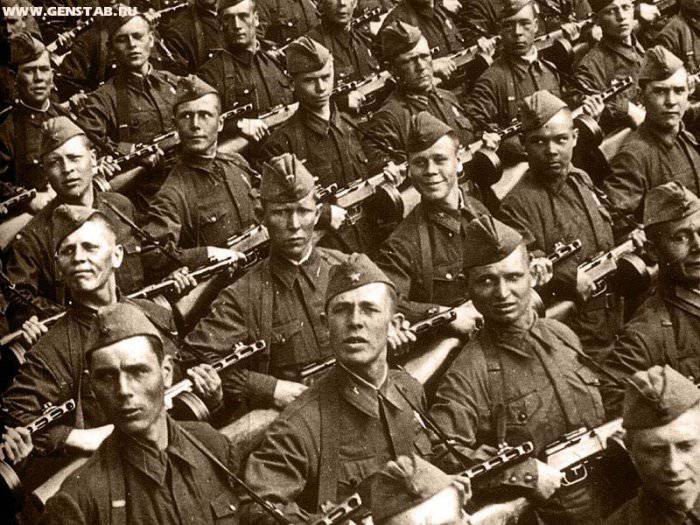 Suddenly the orchestra subsided. Such a single pause was unexpected and endless.

Finally, as a continuation of this alarming silence, a sharp, continuous fraction of the drums resounds, and a column of soldiers appears with two hundred enemy fascist banners. Cloth dragging on wet pavement.

Came an unforgettable moment. Having reached the Mausoleum, two hundred soldiers make a turn to the right and throw fascist banners on the special flooring installed in the square.

This rite was unusual in modern history. When the script was being developed, we had to do some historical research. And those shuffles for the soldiers of this company were accepted, which in ancient Rome were used by legionnaires in such cases. By the way, an important detail: the wooden parts on which the German banners fluttered were much heavier than the Soviet ones, on top they still had various curly steel tips. And it was difficult for the soldiers to throw them along with the cloths in a westerly direction.

Incidents have happened. So, Sergeant Fedor Legkoshnur, capable of carrying the standard of Hitler, suddenly refused this assignment, citing his refusal by not wanting to take the Fuhrer's flag in his hands. However, he was convinced that this was a very serious and important assignment. Writer Marietta Shaginyan briefly and simply described this episode: "Our heroes carry them, like brooms, facing the earth ...".

During training, a mock-up of the Mausoleum was built on the field of the Central Aerodrome for the soldiers to work out techniques for carrying out Nazi banners and standards to its foot.

By the way, just in 1945, the 4 parade was held on the Red Square in Moscow.
The first was held on 1 in May, the second - on 24 in June, on August 12 passed a physical exercise parade, and the fourth was held in November on 7.

A cadet of the Moscow Red Banner Military Engineering School, Leonid Yakovlevich Chaiko, was fortunate enough to participate in each of them. But the veteran’s most exciting memories of June 24 are the Victory Parade. After all, not everyone had the honor of minting a step on Red Square in honor of the Great Victory of the Soviet people.

“From the school to participate in the parade, four boxes were formed,” says Leonid Yakovlevich, “into which servicemen were selected not lower than 176, see height.

Preparation for the parade lasted for a month. Of course, it was much easier for us, the cadets, to prepare, but for the people who went through the hell of war, it was difficult, purely combatant — the front-line soldiers were not used to minting a step in the war. But in spite of everything, they gathered their will into a fist and, up to the seventh sweat, perfected drill training for a solemn march. ”

On the question of what was most remembered during the training, Leonid Yakovlevich answered: “During the next training session at the central airfield near the Dinamo metro station, in the center of Moscow, we stood in formation. Suddenly, the command "Attention!" There was silence, through which a metallic, unusually strange chime came through, which grew with every second. A minute later Marshal Zhukov appeared in front of us. When I saw him close, I was incredibly amazed. Never before in my life have I seen a man in whom the whole jacket - from the collar to the waist - was in orders and medals. This number of awards immediately I have not seen anywhere else.

When passed by the podium, I was struck by the look of Stalin. We used to see him in the portraits of the majestic, a little strict, but not old. Despite the rain, no one was holding an umbrella over him at that moment, and I saw in him a tired, very old grandfather. During the parade, we saw almost nothing. Everyone was very worried, because we had a lot of responsibility on our shoulders. Many Suvorov students often lost consciousness due to excitement. After the parade, each participant was given 100 grams of vodka. ”

Because of the rain, which went into a downpour, a demonstration of Moscow workers did not take place, but the people did not disperse.

In 23 hours the sky shone with an abundance of powerful spotlights. Hundreds of balloons appeared in the air, from which thousands of colored and lighting rockets fell, and to them, volleys of fireworks with multi-colored lights rang out from the ground. And high in the sky in the rays of searchlights the Order of Victory appeared majestically. 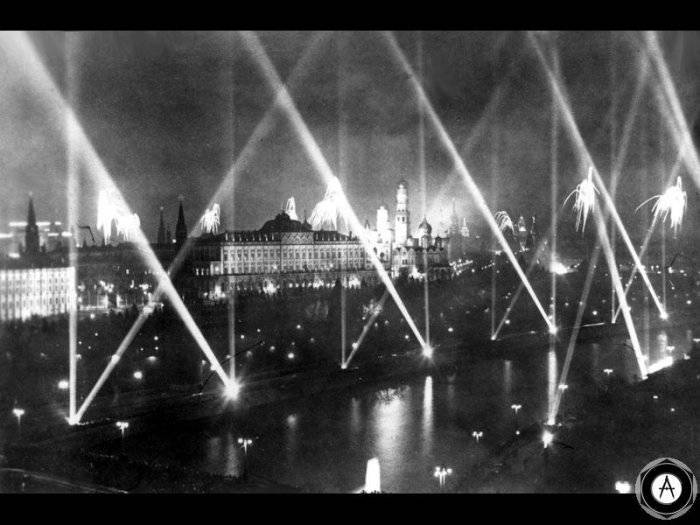 After the grand Victory Parade in Moscow, at the suggestion of the Soviet government and the High Command, in September 1945 a small Allied Forces Parade was held in Berlin. Although he was not so ambitious, his political importance was obvious.

It was attended by Soviet, American, British and French troops.

The parade was hosted by Marshal Georgy Zhukov, Army General Dwight Eisenhower, Field Marshal Bernard Montgomery and General Jean Marie Lattre de Tassigny.
At the Parade, our soldiers struck everyone: it was an unusual and crazy success that demonstrated the prestige of the country.
Ctrl Enter

We are in Yandex Zen
22 June. Brest Fortress. Battle Reconstruction
Sacred Victory Parade 24 June 1945 of the year
2 comments
Information
Dear reader, to leave comments on the publication, you must to register.