3 2014 June
67
In 2009, a new high-precision rifle manufacturer appeared on the Russian arms market. weapons. The Tsar-gun company offered customers a SVL rifle (Lobaeva Sniper Rifle). For the next few months, this rifle was one of the main topics discussed by weapon lovers. However, in the fall of 2010, the Tsar Cannon Company closed, and its employees left for the United Arab Emirates, where they began working at the TADS facility. According to rumors, the reason for the closure of the Russian company was a conflict with one of the major competitors, but there are still no official comments on this matter.


Working in the UAE, employees of the former Tsar Cannon, under the leadership of V. Lobayev, developed several new types of precision weapons. At the very end of last year it became known that the team of designers again changes jobs. Former employees of Tsar Cannon and TADS established a new company called Integrated Systems Design Bureau (KBIS). The purpose of the new enterprise remains the same - the development and production of high-precision small arms. Already under the new brand, Lobayev and his colleagues presented several new rifles, to some extent a development of the SVL. Consider them.

A characteristic feature of the SVN 2009 rifle of the year was a high accuracy of fire and a large firing range. The new rifle SVLC-14С is its further development, thanks to which, allegedly, it was able to preserve the main advantages of the weapon of the previous model. This rifle is designed to use .408 Cheyenne Tactical (CheyTac), .338 Lapua Magnum or .300 Winchester Magnum cartridges. Depending on the wishes of the customer, the rifle receives the barrel and bolt intended for use with the selected cartridge. In the basic configuration, the SVLC-14 rifle is equipped with an 10,4-mm barrel and a corresponding gate, allowing the use of the .408 CheyTac cartridge.

The rifle receiver is proposed to be made of aircraft-grade aluminum with an insert made of high-alloy steel, resistant to corrosion. The weapon does not have a magazine: before each shot the shooter will have to manually feed the cartridge and send it to the chamber with the help of a longitudinal sliding gate. These design features are associated with the purpose of the rifle. The SVLC-14С rifle is designed for firing over a distance of more than 2 kilometers, due to which its design is made as rigid as possible. The weapon is completed with a match barrel LOBAEV Hummer Barrels, manufactured by KBIS from stainless steel. Thanks to these solutions, the maximum effective firing range, according to the UNSC, reaches 2300 meters. Technical accuracy is declared at the level of 0,3 MOA (5 shots, 9 mm between the hit centers from the distance 100 m). 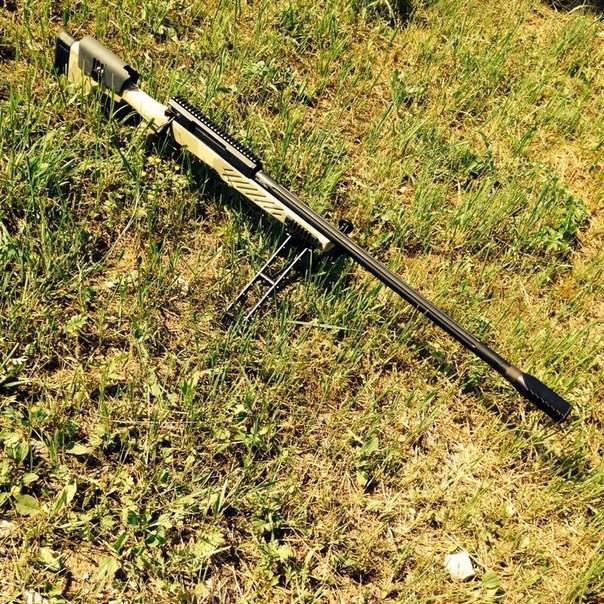 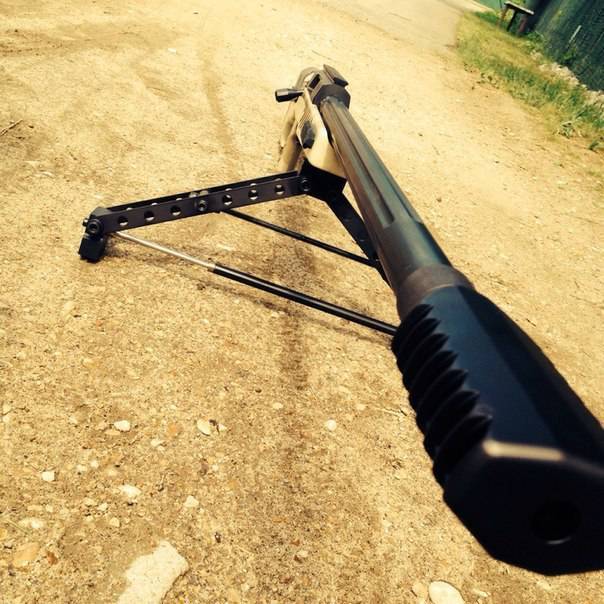 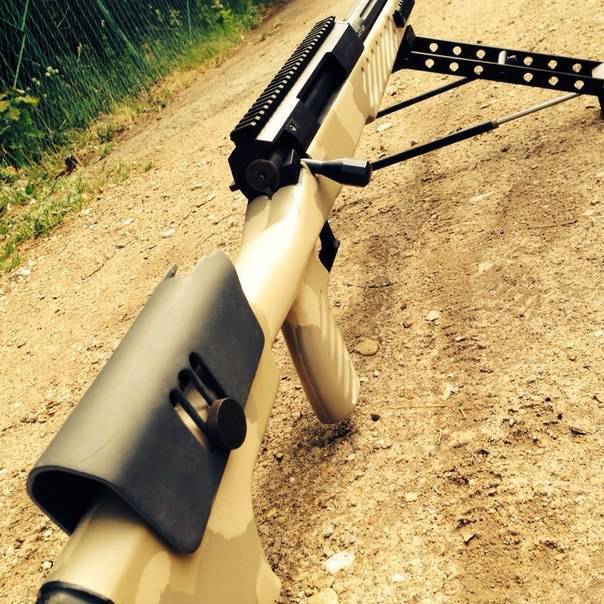 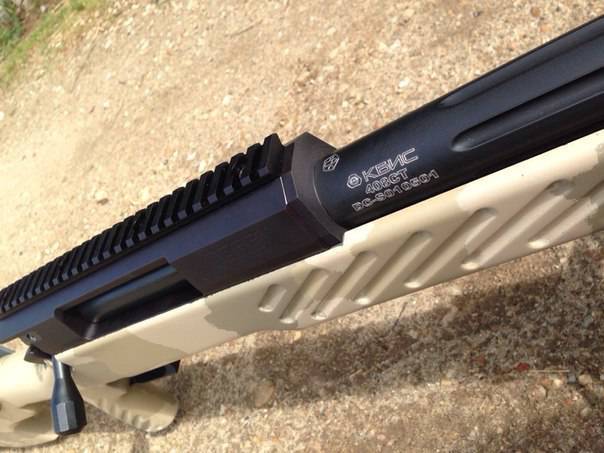 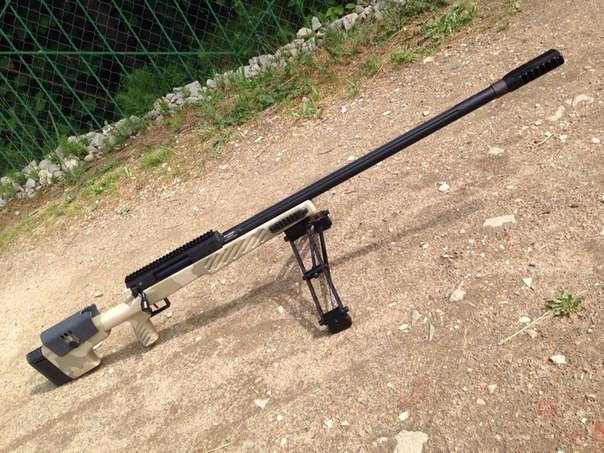 All units of the SVLC-14 rifle are mounted on a bed made of carbon-fiber plastic, Kevlar and fiberglass. This detail was developed on the basis of the corresponding assemblies of previous Lobaev rifles; however, in its construction some innovations were applied, connected with the high power of the .408 CheyTac cartridge. To reinforce the lodge, a special aluminum part of complex shape is used. An adjustable bipod can be attached to the front of the box.

When using a barrel with a length of 780 mm, the total length of the SVLC-14C rifle is 1430 mm. The total weight of the weapon reaches 9,6 kg. 780-mm barrel provides the initial speed of the bullet at the level of 900 m / s. In the basic configuration, the rifle is equipped with a muzzle brake T-Tuner, as well as a Picatinny rail for mounting the sight. Weapons can be used at temperatures from -45 ° to + 65 °. For convenience, the arrow trigger mechanism of the rifle is equipped with a system for adjusting the pull force. This parameter may vary within 50-1500.

“Tactical sniper rifle Lobaeva” was created as a weapon with a simplified design and fairly high performance. The TSVL-8 rifle was developed in accordance with the “skeleton” concept with some of its modifications associated with a reduction in the load on the receiver. In this regard, the weapon received the original carrier system with a relatively small aluminum chassis, which serves as the basis for all units.

For the TSVL-8 rifle, the KBIS staff developed a new COUNT store bolt group. This system is a smaller version of the group DUKE, created by the company earlier. To ensure high accuracy of fire, the rifle has no automation and is equipped with a sliding bolt. The bolt unit interacts with the stainless steel LOBAEV Hummer Barrels barrel. The TSVL-8 rifle is designed to use only one cartridge, the .338 Lapua Magnum. Barrel, bolt and magazine for other cartridges are not yet offered. 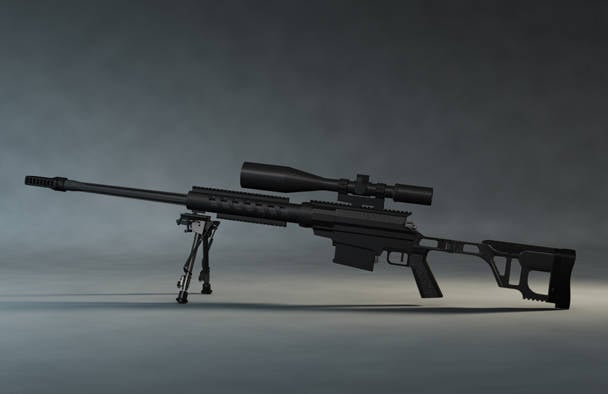 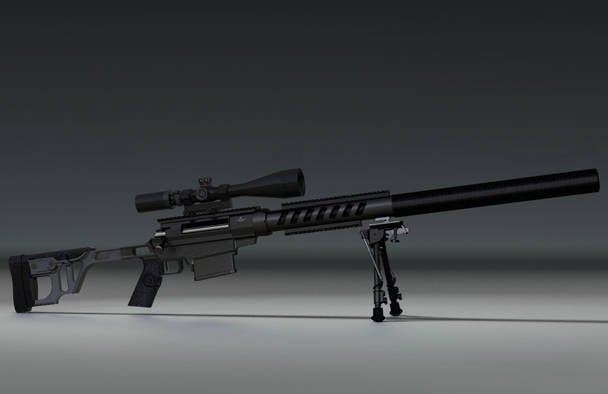 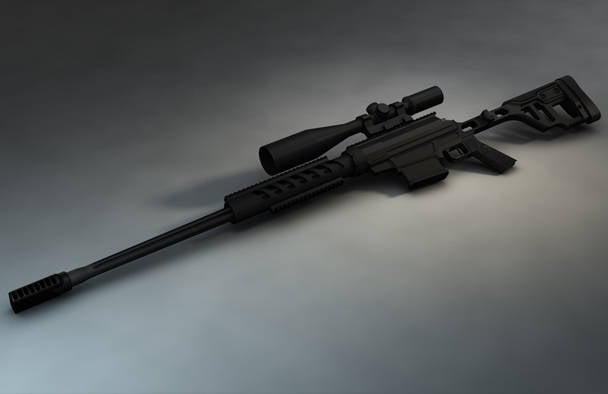 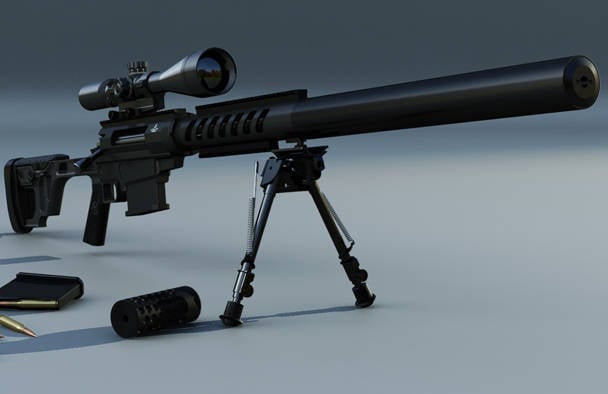 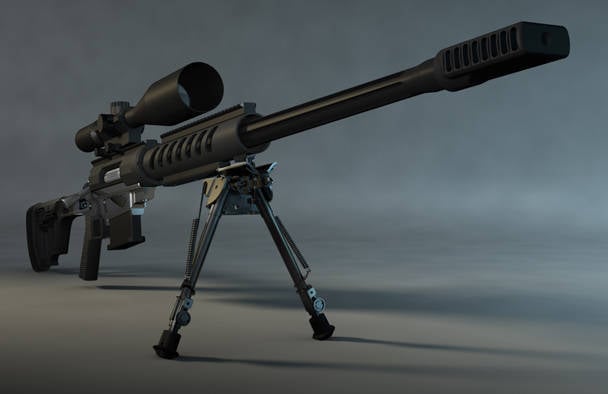 On the upper surface of the receiver TSVL-8 rifle Picatinny rail is provided for the installation of the sight. Two other strips are located on the upper and lower surfaces of the forearm. In front of the forearm is the attachment point of the bipod. The trigger mechanism allows you to adjust the trigger force in the same range as the corresponding aggregates of the SVLC-14C rifle.

The stated characteristics of the fire rifle TSVL-8 are of particular interest. The initial bullet speed of the .338 cartridge Lapua Magnum reaches 900 m / s. The maximum effective range of this weapon is declared at the level of 1400 m. Technical accuracy - 0,4 MOA (12 mm between the centers of 5 hits with 100 m).

The TSVL-10 rifle is another type of "tactical sniper" weapon developed by the Integrated Systems Design Bureau. In fact, this rifle is a revised version of the TSVL-8, designed to use the .408 CheyTac cartridge. All design changes are associated only with a different type of ammunition. 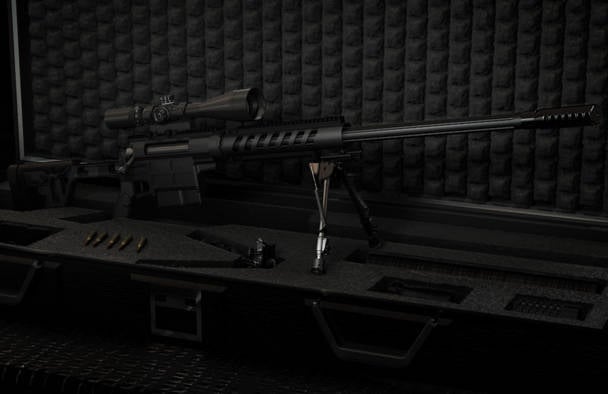 The TSVL-10 rifle has a total length of 1290 mm (916 mm with a folded butt) and weighs 6,5 kg. The weapon is equipped with a barrel length 760 mm, which can be equipped with a muzzle brake T-Tuner. When using .408 CheyTac cartridges, the initial speed of the bullet is at the level of 900 m / s. New ammunition allowed to bring the effective range of fire to 2100 m. Technical accuracy - 0,4 MOA (12 mm between the centers of five hits when shooting with 100 m).

High-precision sniper rifle DXL-3 is a kind of transitional link between SVLC-14С and the TSVL family. The main feature of this rifle is the original aluminum box, on which all units are mounted. For ease of use, the rifle is equipped with a folding stock, similar to that used on a TSVL family of weapons. 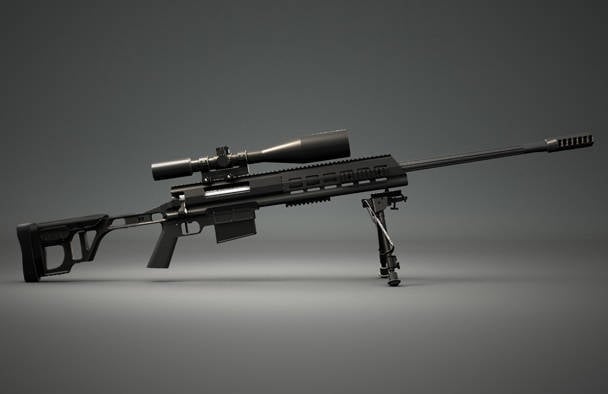 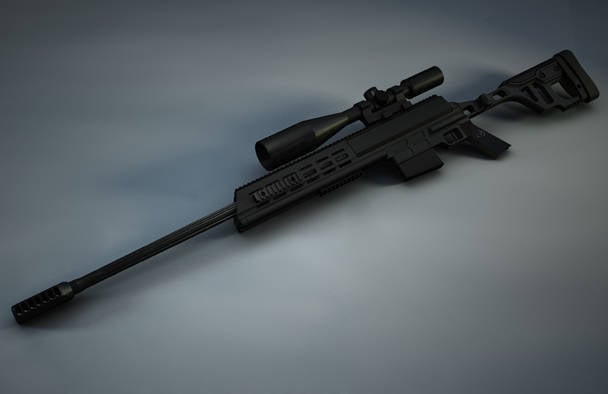 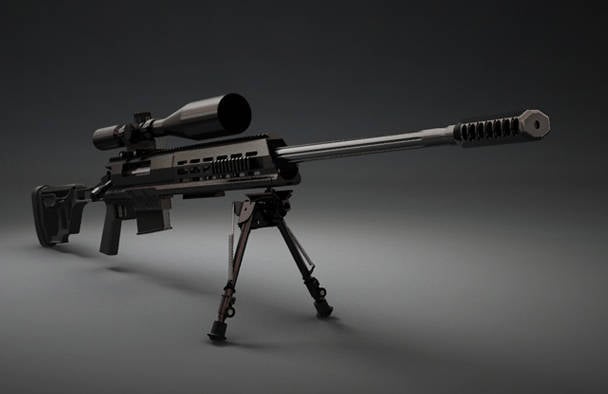 The DXL-3 project provides for the use of a DUKE bolt group with a sliding bolt and magazine power. The DUKE system is a development of the KING group, the development of which began during the work of the Tsar Cannon company. Like other KBIS rifles, the DXL-3 uses the LOBAEV Hummer Barrels barrel. At the request of the customer, the weapon can be equipped with a barrel and bolt group for using the .338 Lapua Magnum or .300 Winchester Magnum cartridge. In the basic configuration, the rifle is designed to use the .338 LM.

The maximum effective range of the DXL-3 rifle, according to the developers, reaches the 1600 m. The initial speed of the bullet is 900 m / s. Having such characteristics, the rifle is capable of firing with accuracy of 0,35 MOA (10,5 between the centers of five hits with 100 m).

The last of the new developments of the CISIS is the DVL-10 noiseless sniper rifle. It is offered to various power structures and units of the armed forces, who need a tool for highly accurate and silent execution of assigned tasks. The basis for this weapon is taken from the projects created during the time of the Tsar-cannon company.

For use with a DVL-10 rifle, a special .40 Lobaev Whisper. With a barrel length of 400 mm (the civilian version of the DVL-10 is equipped with an 600-mm barrel), the initial bullet velocity of the new ammunition is 315 m / s, which sharply reduces the noise of a shot. Together with the subsonic cartridge, it is proposed to use an integrated silent shooting device that closes the barrel of the LOBAEV Hummer Barrels system. 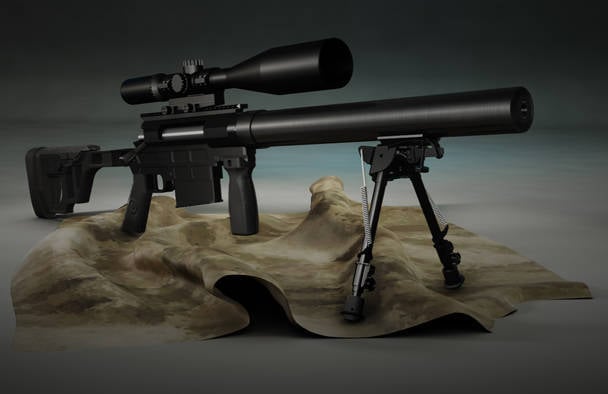 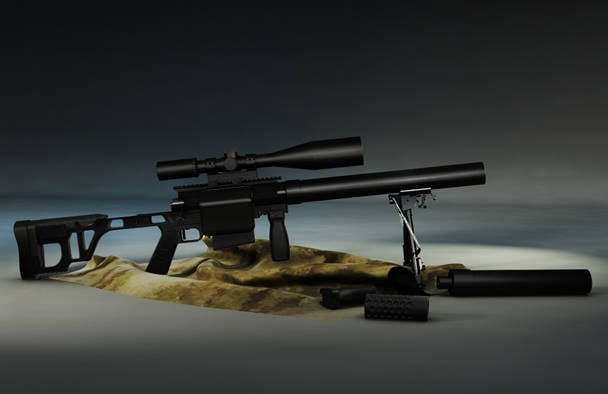 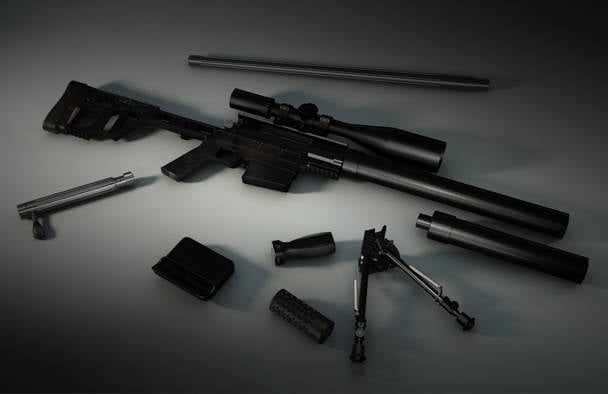 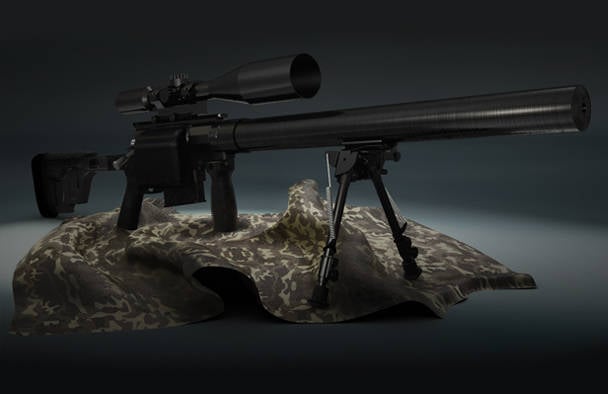 The design of the DVL-10 rifle uses the COUNT store bolt group with a longitudinally sliding bolt, providing sufficient rigidity of the structure and the possibility of using stores. Box-shaped detachable stores hold 5 cartridges. All rifle units are mounted on an aluminum chassis, equipped with a folding stock. The latter allows to reduce the length of the weapon in the transport position from 1004 to 730 mm. Weapon weight - 4,1 kg.

The use of a subsonic cartridge affected the characteristics of the weapon. The maximum effective range of the DVL-10 rifle does not exceed 600 m. According to official data, when shooting at a distance of 100 m, the distance between the centers of five shots is 15 mm, which corresponds to the technical accuracy of 0,5 MOA.

Due to the high characteristics of the rifle company KBIS are of great interest. However, they are unlikely to be widely distributed. There are two reasons for this: the pace of production and the cost of weapons. According to some data, the production capabilities of the company KBIS do not allow to produce more than several dozen rifles of each model per year. In addition, the company plans to expand the production of ammunition for weapons. The second factor preventing the proliferation of KBIS rifles is directly related to the technology of their manufacture. Due to the complexity of manufacturing the rifle V. Lobayev will cost the customer at least several thousand American dollars, depending on the model and equipment.

As far as is known, the full-scale production of new sniper rifles has not yet begun, but everyone can already make a preliminary order for weapons. The number of shooters and organizations wishing to purchase the SVLC-14C, TSVL, DXL-3 or DVL-10 rifle is not known.