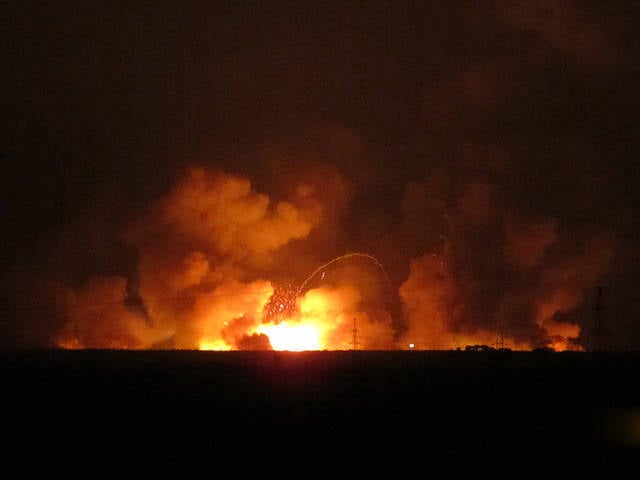 Shells continue to burst on the territory of the military unit in Udmurtia. According to the press service of the State Ministry for Emergencies of Russia in the republic, 300 people, three fire trains, four units are involved in fighting a fire aviation technicians, a demining group is being thrown.

The number of victims increased to seven people, the Interfax press service told the press service of the Volga regional center EMERCOM of Russia. “Affected seven people. One of them is shell-shocked, three with burns, the rest have made cuts, ”said the spokesman. Earlier it was reported about three victims who received serious burns.

Recall about midnight on the territory of the military unit number 86696, located in the village of Pugachevo Malopurinsky district of Udmurtia, during loading and unloading operations at the plant for the destruction of old ammunition, located in a military unit, there was a fire and a further explosion of shells.

Explosions in military warehouses smashed windows in houses in populated areas within 9 km.
According to the press service of the Volga Center of Emergency Situations, about 13 thousands of people are evacuated from settlements of Udmurtia located near warehouses.

A complete evacuation of the population from the village of Pugachevo and the military unit. About two thousand people were evacuated.

Suspended traffic on the highway Yelabuga - Perm. Stopped the movement of trains on the section of the Gorky Railway, adjacent to the military unit. “According to preliminary data, three passenger trains have already been detained. With 5: 00 Moscow time, it is supposed to stop the movement on the section of all electric trains, ”the Ministry of Emergency Situations of Russia said in the republic.

Udmurtia President Alexander Volkov went to the site of the fire. Also, the Prime Minister of the Republic Ildar Khalikov, the Head of the Main Directorate of the Russian Emergencies Ministry for the Republic of Tatarstan Rafis Habibullin and the head of the republican Interior Ministry Asgat Safarov flew to the scene by helicopter, NEWSru.com reports.
By order of Russian Defense Minister Anatoly Serdyukov, a commission of the military department headed by Deputy Defense Minister General of the Army Dmitry Bulgakov flew to the location of the 102 artillery arsenal.

The authorities of Udmurtia declare the presence in the burning military arsenal of missiles. “In warehouses there is 58 tons in TNT equivalent of missiles. This is about half. There are just as many classic artillery shells, ”said spokesman for the head of Udmurtia, Viktor Chulkov.

Earlier, the official representative of the Russian Defense Ministry, Colonel Igor Konashenkov, told Interfax that missiles at the 102 arsenal in Udmurtia were not stored.

Meanwhile, according to the Privolzhsky Regional Center (RCC) of the Russian Emergencies Ministry, the fire covered 152 buildings located on the territory of a military unit. This is an 18 ammunition depot.

In the Main Directorate of the Ministry of Emergency Situations of the Russian Federation for Udmurtia, they explained that, according to preliminary data, ammunition scattered from the territory of the burning warehouses. “It is difficult to establish exact limits for expansion. However, judging by the size of the warehouses, the radius can be large, ”said the agency interlocutor.

The explosions at the military arsenal may stop in about a day, spokesman for the head of Udmurtia Viktor Chulkov told Interfax.

“Experts expect the explosions to stop in about a day. According to the Russian Emergencies Ministry Udmurtia, the main danger caused by the explosion of ammunition in the warehouse of a military unit in Pugachevo has passed, ”said Chulkov.

He also said that "information obtained using unmanned aerial vehicles indicates that the intensity of the explosions is gradually decreasing."

As reported, at the arsenal in the village of Urman of the Iglinsky district of Bashkiria, seven days in a row, powder charges exploded. The fire of artillery ammunition began on May 26, and by the morning of May 27 the fire was extinguished.
As a result of the incident, 12 people were injured, of whom three were hospitalized. 40 buildings burned down in the village, of which 14 houses. About 2 thousand people were evacuated.

27 May, after the danger had passed, residents gradually began to return to their homes. However, 30 May explosions in warehouses resumed. According to the military, smoldering powder charges exploded.
The explosions stopped only on June 1. Homeless as a result of an emergency at the arsenal were more than a hundred people. Material damage, according to preliminary data, exceeds 100 million rubles.

According to the RF IC, the cause of the explosions in the ammunition depot is the ordinary military unit Denyayev. A case under Article 349 of the Criminal Code of the Russian Federation (violation of the rules for the treatment of weapons). 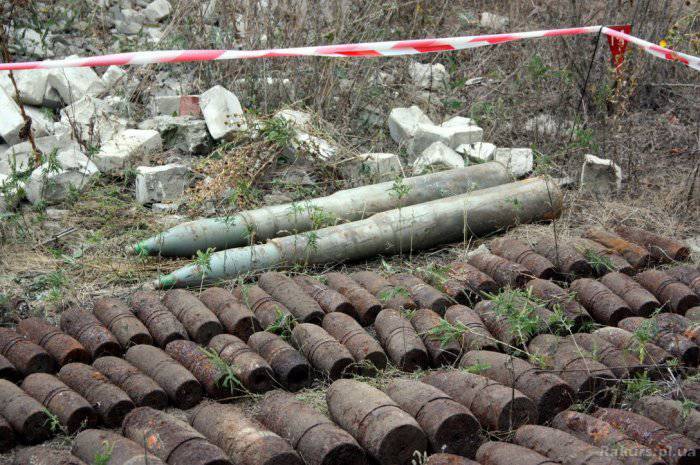 The emergency that occurred on 26 in May of this year at the artillery depots of the 99 arsenal, which is located near Ufa in the village of Urman, is not the first and, alas, probably not the last of similar ones.

Since 1995, 30 has already had similar incidents. From the beginning of 2001, this is already 11. Why are the arsenals of the domestic Armed Forces so regularly torn?

Torpedoes, bombs, rockets and projectiles must be torn by definition. For these purposes they are designed. But the ammunition should be triggered during the war, and not during the period of their storage or transportation. Almost every case of ammunition explosions, similar to the one that occurred in Bashkiria, actually occurs due to a trivial violation of safety rules when handling explosive substances. In the armed forces are now actively disposed of old ammunition.

The Soviet Union has always been preparing to fight on a global scale. And for such a war, stocks of large quantities of ammunition were required for all types of weapons. On this basis, numerous factories producing ammunition worked around the clock. Art warehouses were literally bursting with mines, bombs, shells, rockets for various purposes and torpedoes, and the factories produced and produced them all. However, the global battle did not come. And already in the Soviet Union an incredible surplus of ammunition happened, which was inherited by Russia.

At the same time there was another problem issue. Many arsenals were built in the first half of the last century. Of course, they were built in deserted places, away from housing. But decades have passed, and now almost all arsenals are surrounded by summer houses, and sometimes they have entered the border of overgrown cities.

Russian industry has studied and studied various ways to safely eliminate obsolete ammunition. It was planned that at each large arsenal a technological line will be built for the dismantling of rockets, bombs, shells and other weapons. In this case, the main explosive would not be destroyed, but it was washed out with special solutions, which made it possible to reuse explosives, for example, in the mining industry. It should be noted that the price of pure copper, which is in a cumulative projectile and is destroyed now with ammunition, is at least 8 times the price of explosives. With this approach, there would be no pollution of the environment by toxic elements. The benefits of industrial ammunition disposal were obvious. But, as always, in our country everything is obvious - the most incredible.

With all this, in the 2006, the Federal Target Program "Industrial utilization of weapons and military equipment (2005 - 2010 years)" was launched. The program was supposed to get rid of obsolete ammunition. It provided for the general measurement of the disposal of over 85 thousands of ammunition cars, each weighing 20 tons. As a result of the program, it was assumed that huge material resources would be released: explosives - 114 thousand tons; gunpowder - 224 thousand tons; ferrous metals - 600 thousand tons; non-ferrous metals - 234 thousand tons.

But in the organization of work there was a pledged "bomb", which was not even initially suspected. Thus, the customer was the Ministry of Industry and Trade, and the munitions that are disposed of are under the jurisdiction of the Ministry of Defense of Russia. Each ministry turned out to have its own, in no way joined interests. Ultimately, according to the Chief Rocket and Artillery Directorate, the state defense order of 2006 was only 4% completed, and as of October 2007 of the year (2 year of the Program), only one company began practical utilization of the state defense order of 2007. Last year, about 70 thousand tons of ammunition was disposed of at the enterprises of the Ministry of Industry and Trade.

This year, the Ministry of Defense acquired the rights of the state customer to destroy ammunition. This is the right decision. But! The time has come when it has become elementary to wait with the creation of production capacities in art warehouses. And they decided in the MO - to undermine everything! Although there was an alternative, but they did not wait.

The Russian Defense Ministry did not even fully calculate how much, where and how it should be blown up. But air and earth shook across the country. For the destruction of obsolete ammunition, 60 of army polygons were equipped, equipped with 137 platforms for undermining the main explosives and fuses, burning gunpowder that was extracted from shell cartridges and small arms cartridges. For disposal by blasting from professional sappers 220 groups were formed. Every day tens of tons of old ammunition are blown up at landfills. In the country, this figure is about 1,3 thousand tons.

Even the population of the Leningrad Region experienced discomfort from such activity. The Elizavetinka test site is located in this region, where tons of old ammunition are blown up daily to 50. It is appropriate to note that seismic waves from such regular and powerful explosions that spread in the upper layers of the soil, according to experts, have a negative impact on all living organisms that live there.

For some reason, the military are confident that by the end of the year they will be able to destroy almost all of their own old stocks. Nevertheless, according to some experts, overdue ammunition in the artillery warehouses accumulated over 1,5 million tons. From which it follows that at such a pace it is necessary to blow up more than one and not two years.

What is the absolute barbarism and abomination of the accepted method of disposal? The composition of explosives, especially those that are equipped with fuses, are very poisonous components. With the explosion, all these poisons fly into the atmosphere in order to later settle down on fruits, berries, vegetables, mushrooms, and escape into the groundwater.

The question arises why, without a thorough peer review and the calculation of long-term consequences, was the uncontested decision to undermine all obsolete ammunition as quickly as possible? No answer.

But back to the Bashkir explosion. While highly qualified specialists work at the final disposal sites of the ammunition, soldiers of the military service are used at the cleared military artillery warehouses, at loading sites. With the current state of military discipline, nothing can be expected from the soldiers, except for the prerequisites for emergency situations. If you do not change the system that has developed now, and the technology for the destruction of old ammunition, the Russian ecosystem will suffer irreparable harm, and explosions in the artillery warehouses will become inevitable.

We are in Yandex Zen
Innovation Day of the Southern Military District: emergency equipment
Demining machine "Finder"
17 comments
Information
Dear reader, to leave comments on the publication, you must to register.