Eurasian Economic Union: a historic agreement has been signed!

30 May 2014
95
29 May - historical day. Russia, Belarus and Kazakhstan signed a long-awaited agreement in Astana on the establishment of the Eurasian Economic Union. According to V. Putin, the three countries agreed to pursue a coordinated policy in the energy sector, industry, agriculture, and transport. There were many controversial issues, but, nevertheless, mutual understanding was found. 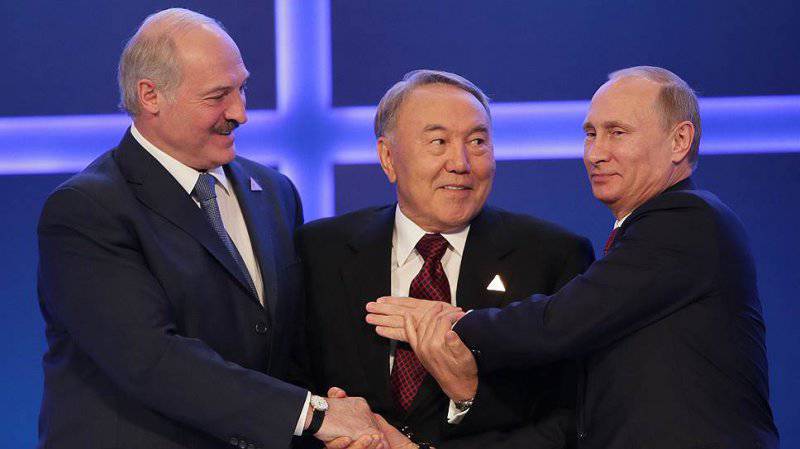 Vladimir Putin said that the treaty "has a truly epochal, historical significance, opens up the broadest prospects for the development of economies and increasing the welfare of the citizens of our countries."

Describing the difficult road to the creation of the EAEU, the president noted that it was “not an easy, more precisely, very difficult job, and so far it has been difficult to agree on all these issues. With disputes and, I do not want to talk with scandals, but still with sharp disputes, with heated discussion, but this all happened, I am sure, this will happen in the future, based on mutual understanding and the desire to reach a compromise acceptable to all. ”

President of Kazakhstan Nursultan Nazarbayev called the treaty the birth of a new geo-economic reality. “Ahead of us is a difficult stage of formation and development,” he said. - Creation is one thing, we have suffered. But now, having created, to prove to ourselves and to all the world the necessity, the viability of this integration is our big task. Integration in itself does not guarantee an ideal life, manna from heaven, we, each of the states, will have to work. ”

And the President of Belarus in his speech expressed regret about Ukraine: “... But, unfortunately, the burden turned out to be very heavy for Ukraine. But I am sure that sooner or later the leadership of Ukraine will understand where its happiness lies. We found someone on this long and difficult path. ”

“Today we are together creating a powerful, attractive center of economic development, a large regional market that brings together more than 170 million people. Our Union has vast reserves of natural resources, including energy. It accounts for one-fifth of the world's gas reserves and almost 15 percent for oil. The troika countries at the same time have developed industrial, industrial base, powerful personnel, intellectual, cultural potential. The geographical position allows us to create transport and logistics routes not only of regional, but also of global importance, to tie up the large-scale trade flows of Europe and Asia, ”- quotes "First channel" Vladimir Putin.

Two other states, Armenia and Kyrgyzstan, have already been asked to enter the Union. Most likely, they will be adopted in the current year, since the EAEU will start functioning already from 1 in January 2015.

The signing of the historical contract commented comrade Pushkov.

“As we remember, at one time, when this process was just beginning - and it began with the most active role of Russia - there was no lack of skepticism about its prospects. Most of the skepticism came from the West. It was as if we were inspired that only Western countries are capable of economic integration, but not the states of the post-Soviet space, and that their only purpose is to become satellites of western integration groups, ”the head of the State Duma’s international affairs committee said. RIA News".

Moreover, let us add to this, at the end of 2012, Mr. H. Clinton, the then US Secretary of State, made a statement in general that the United States would in every way impede the creation of the Eurasian Union, which, in its opinion, is an attempt to revive the USSR. However, with the obstruction of the United States somehow did not work out ...

According to Pushkov, the signing of the treaty is both confirmation of the success of the integration processes between Russia, Kazakhstan and Belarus, and the refutation of the calculations of external forces on the economic and political subordination of these states.

However, not everything went smoothly. Some have expressed "dissatisfaction."

Newspaper "Sight" cites a special opinion of A. Lukashenko.

Before signing the agreement, First Deputy Prime Minister Igor Shuvalov said that the delegations of Russia, Belarus and Kazakhstan "managed to resolve all differences." Alexander Lukashenko used this moment to complain about “some dissatisfaction”.

The President of Belarus said: “We still have the opportunity to make our agreements better, to the mutual benefit of all parties to the agreement. And being a sincere, reliable partner, and Belarus cannot do otherwise, we will definitely talk about this with the President of Russia and the President of Kazakhstan. ”

As for bargaining over the concessions that Minsk allegedly claimed for itself, the Belarusian leader called for “appeasing” those who believe that this was the place to be.

“The Soviet Union collapsed when the Allied republics suddenly decided that they were feeding someone, and they themselves could live better. Now again this tested bogey gets. For example, Belarus does not require any concessions. Everyone in the integration brings something that is interesting to everyone. And this contribution is absolutely not obliged to be measured only by tons, cubic meters or barrels. ”

Well, welcome to life, EAEU! It is still early to celebrate the birthday - it will be January 1. But the fact that 29 May is now a historical date, and the State Department has already gnawed all the fingernails, no doubt.

Observed and commented on Oleg Chuvakin
- especially for topwar.ru
Ctrl Enter
Noticed oshЫbku Highlight text and press. Ctrl + Enter
We are
2, EAEU. Summit Review in AstanaResults of the week. “He who does not regret the collapse of the Soviet Union, has no heart; who wants to recreate it in its previous form, he has no head "
Military Reviewin Yandex News
Military Reviewin Google News
95 comments
Information
Dear reader, to leave comments on the publication, you must sign in.