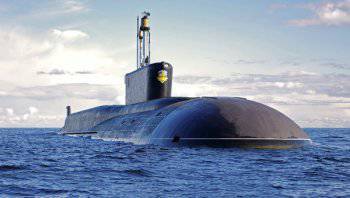 
At present, the Navy has received two Borei-class submarines - the Alexander Nevsky and the Yuri Dolgoruky. Until the end of 2014, a third submarine, the “Vladimir Monomakh”, will be received. In addition, Sevmash is building the fourth - Prince Vladimir.

"On the eve of this year's celebrated in Russia for the Navy (July 27), an official groundbreaking ceremony for the fifth Borea, Prince Oleg, will be held at the Sevmash plant on July 19," the VPK representative said, adding that the fourth day would be laid NPS class "Ash".

60 submarines are currently in service with the Navy: 10 strategic nuclear, more than 30 multi-purpose nuclear, the rest - diesel and special-purpose.

The basis of the group of naval strategic nuclear forces of the Russian Federation are the submarines of the 667 BDR and 667 BDRM projects, which are in service with the Pacific and Northern fleets.

Borey-class submarines will be replaced by the world's largest nuclear submarine missile carriers of the 941 Shark project.

Ctrl Enter
Noticed oshЫbku Highlight text and press. Ctrl + Enter
We are
The submarine "Vladimir Monomakh" completed the first launch of the Bulava missileIn the near future, the Russian Navy will include seven multi-purpose nuclear submarines Yasen and Yasen-M, the commander in chief
Military Reviewin Yandex News
Military Reviewin Google News
30 comments
Information
Dear reader, to leave comments on the publication, you must sign in.