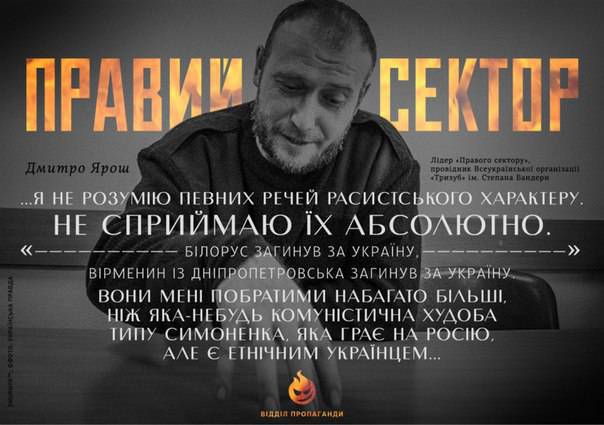 Dmitry Yarosh, the “bloody demon” of the Bandera revolution, the leader of the striking force of Maidan - the “Right Sector”, declared by Russia on the international wanted list, calling for a partisan war in Russia. A supporter of the strategy of physical destruction of the leaders of political opponents, and a participant in the presidential campaign in Ukraine ... And also one of the most mysterious figures of the latest tragic events. There is a feeling that he will still play an important role in the revolutionary turmoil unfolding in Ukraine.

With his terrible image, he received a philological education, the father of three children, was born in Dneprodzerzhinsk (Dnepropetrovsk region), and not at all in Lviv, as one would expect. He did not work for a single day: he immediately joined the nationalist organization, devoted himself to serving the Bandera cause, and became a bright follower: he wrote the book Ukrainian Revolution: The 21st Century.

He raised the Bandera banner on Maidan so highly that it became his bogey, and the object of criticism of his more respectable allies, that by this he discredited Maidan in the eyes of Europe and played into the hands of Moscow. Sashko Bilyy, killed for the same reason by order of Avakov, is his field commander. Nakat on Yarosh was serious, so Russian Foreign Minister Sergei Lavrov had to mention the nonsense of finding a connection between Moscow and the Right Sector, leaving her on the conscience of the pro-press.

After that, Yarosh, possibly on someone’s advice, corrected his rhetoric and activity in general. The “Right Sector” seems to be lurking. Today, Yarosh says that the Right Sector is only a party, and he is a political figure; all the soldiers of the Right Sector serve in the National Guard battalions. But this is only part of the truth, in fact, his commanders lead these formations, he calls them also the "Bandera army." That is, the military structure of the “Right Sector” is legalized, the participants of the hostilities in the South-East distinguish the militants of the “Right Sector” as elite fighters and punishers, distinguished by their particular cruelty.

In the last presidential campaign, Yarosh tried to talk about anything, more about everyday problems, about life, if only not about South-Eastern affairs. He stated that the Right Sector Party is preparing to take the most active part in the upcoming parliamentary elections, in which it needs a little: “everything must be done”.

In the press, there was information that it was Yarosh who saved Oleg Tsarev’s life after television on leaving the television studio, when Maidan’s self-defense was beating him, and already wanted to carry him to the Maidan. He was rescued by Yarosh’s people: they suddenly arrived in a minibus and snatched from the crowd, taken to the prosecutor’s office ...

Maydannaya press then wrote that Yarosh saved the reputation of the presidential campaign and his own, because the murder would be attributed to him. Perhaps, but not a fact, and that for the "bloody demon" another murder? When it comes to the press service of the “Right Sector” to declare that “he is not involved,” and the entire Ukrainian press unconditionally believes this. The fact that the people of Yarosh save Tsarev’s life, but who and why gave such an order - one can only guess.

In general, Yarosh gives the impression of a secretive person, on his mind. A sincere ultranationalist, fanatic, but with education, he is ambitious, and, probably, therefore, contradictory: he said that he would rather embrace Don Cossack than gay. One of the most odious leaders of the neo-Nazi movement, and the "patriot of Ukraine" for its audience. He has a long-term friendship with Valentin Nalyvaychenko, with whom he started, who is considered to be a long-time CIA agent. Probably, Yarosh himself is a CIA agent, and is still subordinate to Nalyvaichenko, today the head of the SBU.

The headquarters of Yarosh is not in Kiev, in the thick of political events, but in Dnepropetrovsk, in his small homeland. The “politician” nevertheless wants to be closer to his “Bandera troops”. He understands that the east of Ukraine “does not accept him to Bandera,” so it is logical that, according to him, “the Bandera army crossed the Dnieper for the first time,” so he is friendly with all the forces that can be allies in his “struggle” in the East. So he became friends with the oligarch Kolomoisky, who financed his "national battalions."

But friendship against a common enemy — in this case, “Muscovites” is a fragile thing. This is the situation of Ben Laden, also a militant, theologian, fanatic, CIA agent, who was friends for the fight against Moscow with the same West. And then Bin Laden and his al-Qaeda turned against their Western masters.

This is what Yarosh will do when his Bandera idea starts to fall apart from being in contact with European geellive, just as the Islamic idea is falling apart from such contact. It may happen that Yarosh will eventually become the Ukrainian Bin Laden, an uncontrollable element of the Ukrainian turmoil, I mean the revolution ...

Ctrl Enter
Noticed oshЫbku Highlight text and press. Ctrl + Enter
We are
Partisan Glory DayOn the Maidan had fun, while the Crimea did not lose
Military Reviewin Yandex News
Military Reviewin Google News
75 comments
Information
Dear reader, to leave comments on the publication, you must sign in.