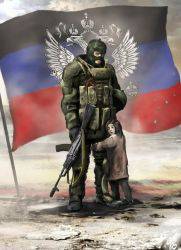 “Maybe Europe went to Ukraine to seek its own death,” said French historian Emmanuel Todd in an interview with French Culture (France Culture) 26 in May. "She (Ukraine) will continue to disintegrate, and Europe, not Russia, will be to blame." And further: “The eastern part of Europe is a zone of weak statehood and violence. Something devilish is being prepared there. ”

While Kiev’s troops, under the official indifference of European governments, with American contract soldiers in the squadron, intensify the slaughter against the Russians in Donetsk, carry out a real genocide of the population using Su-25 bombers and attacking helicopters against the poorly armed defenders of the city, it is the German population that gives signs of concern and disturbances. For several weeks already, “demonstrations on Mondays” (“Montagsdemos”) have been held in various cities of Germany, in which political activists, media representatives and ordinary citizens condemn NATO and the German government, which is involved in the subversive activities of the Americans.

But not only Germans feel the physical and historical proximity to the East. More than three million Russian Germans who arrived there after the collapse of the USSR live in Germany. Almost two million of them are repatriated Germans, who from 1992 to 2007. took advantage of the law of return to their original homeland and received citizenship. And half a million Russians are economic immigrants. In addition, these are residents of the former GDR, loyal to the communist system, who, after the unification of the two Germanys, lost their ideal. Many of them speak Russian, remain members of a non-existent party, are united by their previous fidelity to Moscow, Soviet nostalgia and are still traumatized by the disappearance of their GDR state. Therefore, they are able to put themselves in the place of Russian-speaking Ukrainians opposing the aggression of the Kiev government.

Every Monday they get together to protest, first of all, against the lies of the leading media and TV channels (ZDF, ARD). Speaking in Russian, they are well aware of this. They are protesting against the prohibition by the Kiev government of the Ukrainian Communist Party, against the non-recognition of the Crimean referendum, in which the people expressed their will to join Russia. They are also protesting against providing the Ukrainian army with uniforms from Berlin. Gradually, they were able to win the attention of German pacifists, tired of the passivity of the green and left-wing parties, who proclaim the world, but ignore the tragedy that occurs near their doorstep.

It was in these circles that the idea was born of creating a “German legion” of helping Russian Ukrainians. According to the Moscow magazine "Culture", 400 activists are ready to go to Ukraine. They called themselves "The Thalmann Battalion" in honor of the German Communist Legion, which went to war against the fascists in the Spanish 1936 war of the year. The battalion was created by Ernest Telmann, the head of the German Communist Party in the underground during the times of Nazism and a loyal Stalinist. “And now we have to go against the fascists in Kiev,” they say.

The fact that many of them are veterans of the Red Army and former members of the special group of eastern German forces proves the seriousness of their intentions. In any case, this is the first sign of how Western destabilization in Ukraine, directed against Russia, can have an unexpected counterstrike in the eastern part of Europe.

Ctrl Enter
Noticed oshЫbku Highlight text and press. Ctrl + Enter
We are
In Donetsk, a monument to Uncle Vasya was installed, and the ukrokrateli “congratulated” the Donbass on the Day of MetallurgFrench Foreign Legion today
Military Reviewin Yandex News
Military Reviewin Google News
36 comments
Information
Dear reader, to leave comments on the publication, you must sign in.