Brigadier in a row 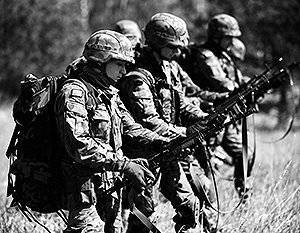 The initiative of Ukraine to create a certain joint military brigade with Poland and Lithuania should not be considered a military threat, Russian experts believe. In their opinion, the threat is different: in a forced pull of Ukraine into NATO structures, right up to the deployment of missile defense facilities on Ukrainian territory. Earlier, Sergei Shoigu announced the unprecedented activity of the armed forces of the alliance near the borders of Russia.


On the eve it became known that the government of Arseniy Yatsenyuk approved a draft agreement on the establishment of a military brigade joint with Lithuania and Poland. About the start of work on the project, which received the not very euphonic name LITPOLUKRBRIG, said the appointed Verkhovna Rada Acting. Minister of Defense of Ukraine, Mikhail Koval. According to him, the agreement with Warsaw and Vilnius "will be signed within a month, and maybe earlier."

Koval stressed that this decision is very important for Ukraine, since both Poland and Lithuania belong to NATO. “We will prepare our component so that we know NATO standards — they have a lot to learn,” Koval noted. According to the head of the Ukrainian Ministry of Defense, "the brigade will perform including peacekeeping functions."

As LifeNews told the Lithuanian Ministry of National Security, “we are now in the process of completing all the procedures that will lead to an agreement between Lithuania, Poland and Ukraine; Ukraine and Poland are awaiting official confirmation from Lithuania. ” Ukrainian media say that the Polish Defense Minister Tomash Semonyak said earlier that due to Russia's aggression against Ukraine, NATO is obliged to increase its military presence in Europe. It should be noted that the head of the Polish Ministry of Defense long before the beginning of the Ukrainian crisis, in March 2013, predicted the creation of a joint Ukrainian-Polish-Lithuanian military brigade.

The special interest of Poland is clear, which since the times of the Polish-Lithuanian Commonwealth feels itself to be the hegemon of Eastern Europe. The Ukrainian crisis gave Warsaw the opportunity to talk about the modernization of its own army. As the newspaper VIEW, in connection with the situation in Ukraine, Poland decided to revise the modernization plan of the armed forces and speed up the purchase of launchers for 300 kilometers of missiles, unmanned aerial vehicles, and assault helicopters.

And NATO as a whole is trying to use the crisis in Ukraine to the maximum to prove its relevance, Russia's permanent representative to the North Atlantic Alliance, Alexander Grushko, believes. Recall that in mid-April, Russian Defense Minister Sergei Shoigu noted an unprecedented increase in the activity of the US and NATO forces in Eastern Europe near the Russian borders.

Note that the day before in the airspace of Lithuania, Latvia, Estonia and Finland began a two-day, already 18-th in a row, training of the NATO Air Force in the Baltic region. As Regnum reports referring to the Lithuanian Ministry of Defense, fighters of the Royal Air Force of Great Britain Eurofighter Typhoon, as well as the MiG-29 of the Polish Air Force, performing the mission of the NATO air police in the Baltic States, participate in air exercises near the Russian borders. At the same time, on the same day, NATO Secretary General Anders Fogh Rasmussen once again expressed his dissatisfaction with the presence of Russian troops near the Ukrainian borders.

As noted by Interfax, the elected president Petro Poroshenko, responding to the congratulations of Barack Obama, said that Ukraine felt the support of the United States on the issue of territorial integrity and sovereignty, which was expressed through the position of the United States - including in NATO. However, Poroshenko has not yet supported the idea of ​​his rival Yulia Tymoshenko - simultaneously with the presidential elections to hold a referendum on joining NATO in the country.

According to experts, to which the VIEW newspaper turned, it will not be a question of the formal entry of Ukraine into the North Atlantic Alliance, but of more and more “cooperation” with NATO.

NATO instructors will not help

The joint brigade itself, in the composition that was announced, does not pose a threat to Russia, believes the President of the Academy of Geopolitical Problems of the Russian Federation, Doctor historical Sciences, Colonel-General Leonid Ivashov. “The most powerful combat element of the newly created brigade is its Polish unit. In fact, Lithuania does not have its own army, and the Ukrainian army is demoralized, ”Ivashov said in an interview with the VZGLYAD newspaper.

“It is indicative of how the Ukrainian defense ministry persuades pilots and soldiers to shoot at civilians — they are promised apartments and lured with big money,” Ivashov notes. “The army requires large expenditures in its preparation and maintenance, Ukraine has no such means.” Therefore, the Ukrainian armed forces should not be considered NATO-capable partners, the expert believes. According to Ivashov, given the demoralized state of the Ukrainian military, the help of NATO instructors and advisers will be useless. “On the contrary, one should expect that the army of Ukraine will now be rapidly reduced, and its combat readiness will only fall,” Ivashov believes.
More importantly and far more dangerous is the other, the expert emphasizes: the creation of a joint brigade with the participation of the two countries of the North Atlantic Alliance is a manifestation of the “creeping pull of Ukraine into NATO”. “This is a retaliatory response to the reunification of the Crimea and Sevastopol with Russia,” notes Ivashov. “Directly NATO cannot enter Ukraine, since Russia is behaving very restrained in relation to what is happening in the South-East, in Donetsk and Lugansk.” According to the interlocutor, the goal of Western military strategists is to draw Russia into the confrontation so that the leading NATO country - the United States - has the opportunity to order the alliance troops to directly intervene in Ukrainian events.

But so far there is no reason to intervene, “various kinds of maneuvers are going on, like creating a joint brigade,” Ivashov notes. According to the expert, further involvement of Ukraine into NATO structures may also imply an agreement on the deployment of NATO missile defense facilities in Ukraine.

“The Ukrainian army needs to be re-created”

Igor Korotchenko, a military expert and editor-in-chief of the National Defense magazine, also believes that the creation of a Polish-Lithuanian-Ukrainian brigade is not in itself a military threat.
“It’s another thing that we are talking about trends, and the trends indicate that Ukraine is still focused on early integration into NATO,” the expert stated in an interview with VIEW. “This integration implies a transition to NATO standards in terms of military planning and the use of appropriate command solutions.” Therefore, from the point of view of trends, we must observe the development of events, emphasizes Korotchenko.

“The current Ukrainian armed forces, affected by corruption, collapsed, are not yet suitable for anything,” said Korotchenko. According to him, Ukrainian security forces can only destroy a defenseless civilian population, but Ukraine is not capable of military confrontation.

“With Poroshenko’s coming to power, obviously, mechanisms will be launched under an accelerated program of preparing Ukraine for NATO membership, and this task will be solved in a comprehensive manner,” Korotchenko believes. “As far as the Ukrainian army will be able to go over to NATO standards, time will tell.” But this, the expert again emphasizes, will be the creation of a fundamentally new army.

Ctrl Enter
Noticed oshЫbku Highlight text and press. Ctrl + Enter
We are
A great interview with Sergey Lavrov: about Ukraine, Obama and IranMilitary reform as an integral part of the security concept of the Russian Federation: Systematic dynamic assessment
Military Reviewin Yandex News
Military Reviewin Google News
39 comments
Information
Dear reader, to leave comments on the publication, you must sign in.