McCain is going to democratise Russia 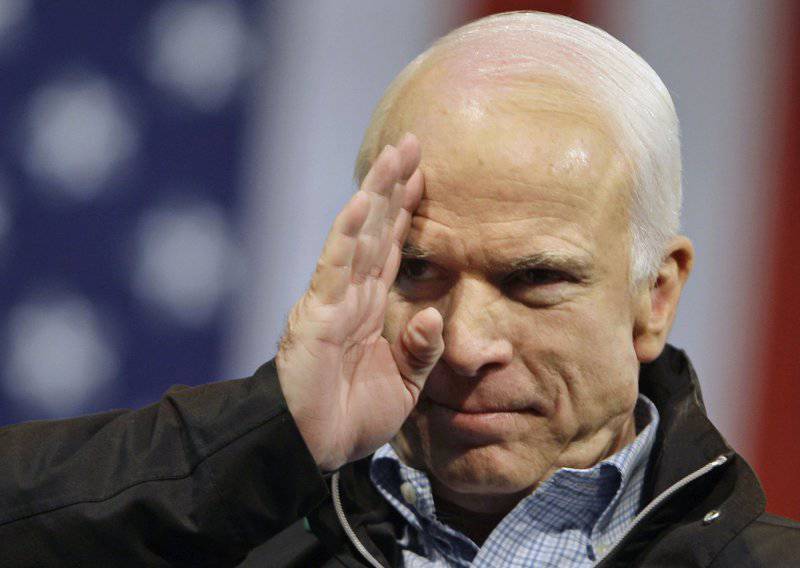 The United States decided to start a “Maidan” in Russia, for which purpose they are actively discussing in the Congress an initiative on the allocation of as much as thirty million dollars to democratization of the Volga, Siberian, Far Eastern and other spaces. With this money, America is going to build democracy in Russia by the 2017 year, that is, until the end of the reign of Mr. Putin. The media and blogs are already writing about the "overthrow of Putin."

"Vesti" They say directly that Washington "has begun the preparation of Russian Maidan."

Indeed, the so-called “Russian Aggression Prevention Act 2014” was recently introduced to the US Congress, which means “The Act of Preventing Aggression by Russia from 2014 of the Year”. If we turn to this quite official document, it will become clear: a whole range of sanctions is planned against the Russian Federation, and even the deployment of additional US troops on the borders with Russia. In addition, large-scale military exercises of NATO troops are expected - again, in the regions bordering the territory of our country.

Well, to frighten the teachings and the presence of the military near the borders - this has already become a habit among the powerful and is called "muscle play".

The main thing in the text of the initiative of the Republicans (among whom not the last place is occupied by the famous Mr. McCain) is not the teachings, but money. Money for the democratization of Russia.

In the “Russian Aggression Prevention Act 2014” financial resources were pledged: for 10, millions of dollars will be sent towards Russia in 2015-2017. on the “development of democratic processes”.

This is where the annual amount is spelled out: "For each of the fiscal years 10,000,000 through the subsection (a)). So, 2015 million, in total, is given. Under (a), a short and direct instruction to John Kerry is given: "The Secretary of State Government". That is, the state secretary must "step up efforts" himself or "through non-governmental organizations." And then the list lists what should be spent 2017 million dollars.

(By the way, various inattentive comrades shout about 30 billions, but this is not true. It's about 30 millions.)

These, in general, fairly modest amounts should go to “improving democratic governance”, transparency, responsibility, rule of law, fighting corruption, strengthening the role of democratic institutions, political organizations and civil society organizations, US support for “independent media” in Russia , strengthening the activities of educational and cultural exchanges in the territories of the countries of the former USSR, expanding the technical possibilities for the Internet without censorship, etc.

The bill, advanced by Republicans, has passed two readings and is already under consideration by the Congress Committee on International Relations. Meanwhile, the chances that the president will not sign him are quite large. First, in the US financial crisis. Secondly, Republicans to Barack Obama are not brothers of political faith. And McCain, one of the co-authors of the project, is indeed Obama’s constant critic and almost his enemy.

On the other hand, you can print millions. To allocate money to create a zone of chaos in the world - in our time for some people, this means strengthening the national currency. The dollar - after all, it’s not only the oil one, its second security is military force. This is spelled out in treaties with the Saudis and other Arabs, who in the 1970-ies. promised to sell their oil only for dollars, but in exchange for military protection.

Analysts are already discussing the creation of a “zone of chaos” in Russia.

Love Lyulko (Pravda.ru) cites the opinions of several experts regarding the question.

“The countdown to the creation of a zone of chaos must be kept from the“ Arab spring ”, says Andrei Fursov. - Then she, as if on a Bickford fuse, ran to Syria, and then, according to the US plan, was to withdraw in the Caucasus. But in Syria, this cord was cut off by Russia with the help of China. And then the second Russian-American front was opened, the second center of chaos - in Ukraine, in order to create here a bridgehead, an anti-Russian zone of pressure on Russia. In Ukraine, a new tactic was applied. Not a color revolution, but a bloody revolution (in the sense that blood was shed). Here we first saw the union of liberals and neo-Nazis. And this is not by chance: in Europe, Nazism is being rehabilitated in order to abandon it against the Russian Federation. ” According to the historian, the next destabilization zone will be Central Asia. Why? And because Americans need to arrange the centers of chaos around the perimeter of the Russian Federation. Then the "pockets" will be merged. A. Fursov pointed to vulnerable zones: “A vulnerable zone is where oligarchs and corruption exist, since people's discontent can be used to carry out coups”.

A senior researcher at the Institute of Slavic Studies of the Russian Academy of Sciences Peter Iskanderov (whose articles, we note, are often published on the website of the Foundation for Strategic Culture), believes that the creation of a chaos belt around the Russian Federation historically dates back to the end of 1980's - the beginning of 1990's. A start was made by separating from Russia the countries of the former Eastern bloc in Europe: “It was envisaged to separate them from economic ties with Russia, a political reorientation towards Euro-Atlantism. The goal was to prevent Russia from defending its own interests in the region of Eastern, Southeastern Europe, the Balkans, the Transcaucasus, destabilizing Russia from the inside, forcing its armed forces to remain in combat readiness, and so on. ”

Today’s offensive only expands this zone, the expert says. According to Washington’s plan, Russia "must become a defensive side, that is, it will actually face the emergence of long-term instability along the perimeter of its borders, and in the future - of NATO military forces".

What will the United States take first thing for? The answer is. “The next focus, which can be unfrozen on the wave of events in Ukraine,” the expert points out, “this is Transdniestria, this is the Nagorno-Karabakh conflict and, more broadly, this is the situation in the triangle Turkey, Armenia, Azerbaijan.”

As for Azerbaijan, there is not only a situation with Karabakh, but there are those who are dissatisfied with the Aliyev clan. And in Kazakhstan, not everything is calm ...

“I believe that soon we will find that the same kind of problems appeared in Azerbaijan as in Ukraine,” said Ruslan Harabua, senior researcher at the Caucasus Department of the Institute for CIS Countries, in an interview with Pravda.ru. - We add that American NPOs are actively working in Kazakhstan, there are thousands of them around 2,5, and very few people talk about this. Naturally, there is always a moment of money laundering in these structures. ”

According to A. Fursov, the United States will begin to act against Russia through this program in the fall of this year, and this time it will not start from Moscow: “I’m worried about youth and children’s programs that the West (its fifth column, agency of influence) implements here, Russia. I think that our strategic adversary will try to start shaking up the situation in Russia by the fall. And it will be done not in the capitals, in Moscow and St. Petersburg, but in million-plus cities. Formally, the United States is concerned that there is anti-American sentiment. In fact, they will try to sway these cities, create dissatisfaction with the existing regime. And Russia is vulnerable - because a country whose economic growth is 1% is very vulnerable. ”

By the way, the American president in recent days has become belligerent - almost more than ever. He quite seriously voiced American aspirations for peacekeeping and even threatened the “aggressors” with an army. And he began not from China, which has long been sharpening a tooth, but from Russia.

“A regional aggression that goes unpunished — in the south of Ukraine, in the South China Sea, or anywhere else in the world — will ultimately affect our allies and could draw our army in,” said Obama

In a word, Barak Hussein once again made it clear to the world community who is the boss on the planet.

Observed and commented on Oleg Chuvakin
- especially for topwar.ru
Ctrl Enter
Noticed oshЫbku Highlight text and press. Ctrl + Enter
We are
Results of the week. “He who does not regret the collapse of the Soviet Union, has no heart; who wants to recreate it in its previous form, he has no head "Russian Arms Expo-2013: exhibits and statements
Military Reviewin Yandex News
Military Reviewin Google News
213 comments
Information
Dear reader, to leave comments on the publication, you must sign in.