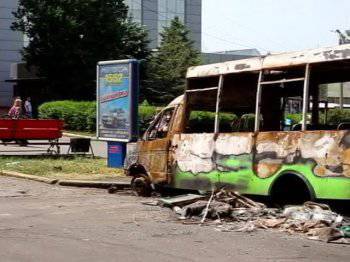 According to the information agency "Vesti", representatives of the Security Service of Ukraine stated that they managed to detain one of the leaders of Kramatorsk people's militia, Ivan Lysenko, against whom investigative actions are already being conducted.


Meanwhile, the situation on the territory of Donetsk region remains restless, notes ITAR-TASS.

May 28 anti-aircraft missile military unit in Donetsk came under fire from mortars, sniper rifles and machine guns. One of the mines exploded near the sanitary unit, the second not far from the parade ground. No injuries. The shelling was carried out from the greenery surrounding the territory of the unit.

It is also worth noting that the Verkhovna Rada of Ukraine has registered a bill providing for the introduction of a state of emergency on the territory of Lugansk and Donetsk regions.