Fighters of the Islamic Movement of Uzbekistan detained in Moscow Region 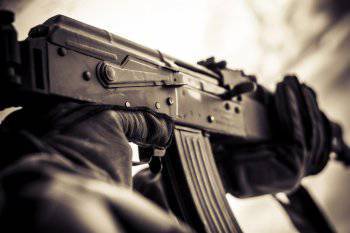 During the joint operation of the FSB and the head of the Criminal Investigation Department, the leader of an ethnic organized group responsible for assault with a firearm was detained weapons, Said "Reedus".


Tajiks, armed with an AK-47 assault rifle, with a traumatic pistol converted to a combat one with an improvised silencer, operated on the territory of the capital region.

The leader of the group, an 27-year-old resident of Tajikistan, also led a cell of the banned terrorist organization, the Islamic Movement of Uzbekistan, into which people from Central Asia were recruited.

Ctrl Enter
Noticed oshЫbku Highlight text and press. Ctrl + Enter
We are
Results of anti-terrorist work on Dagestan in April 2014During the special operation in Apraksinom yard about 300 people were detained
Military Reviewin Yandex News
Military Reviewin Google News
29 comments
Information
Dear reader, to leave comments on the publication, you must sign in.