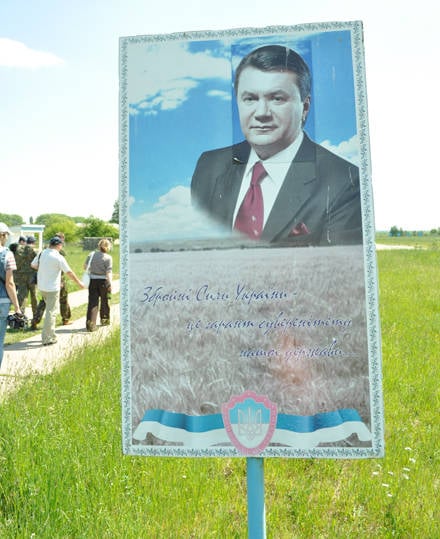 The commander of the military unit was not removed from office for a portrait of President Viktor Yanukovych, who appeared on top of an image with the previous President Viktor Yushchenko on an information poster.

This was said by the representative of the Ministry of Defense Konstantin Sadilov.

He also said that the photo of the poster was made during a press tour of journalists at the site, organized for the Day of Journalist.

Journalists are outraged by the appearance of photos

The participants of the press tour wrote a collective letter in which they were outraged at the fact that the deputy editor of the newspaper Podolsky Courier, Vitaly Taranenko, published this photo.

"The journalistic community of Khmelnitsky, Vinnytsia and Rivne regions, and not only the participants of the extreme press tour, strongly condemn the shameful case of the deputy editor of the Podolsky Kuryer newspaper, Vitaly Taranenko, who, in violation of the norms of the journalist’s corporate ethics, was guided before by the egoistic desire to get cheap popularity ignoring the elementary rules of human respect and gratitude for the remarkable celebration given to the reconnaissance soldiers of the special forces regiment and posted on the Internet photos from the landfill portion, where the President of Ukraine has been among the image posters with visual agitation with certain disadvantages printing character ", - noted in the letter provided by the BBC on-Sea.

The authors of the collective letter also complain that because of the publication of the photo in the press, the commander of the unit, Colonel Vasily Denisyuk, was released.

A journalist from Khmelnitsky also expressed doubts whether such posters were generally needed at the sites.

"What do they carry these posters at all, what kind of load? Is this a red herring?" -, said Vitaly Taranenko.

The colonel was not fired, he left

Colonel Vasyl Denisyuk said he did not know whether the documents for his dismissal were filed.

The case itself, he estimates as something that "you can unleash anything."

The commander of the military unit also said that he had already decided to quit himself. But at the same time says that not for this case.

Why the poster was updated, sticking Yanukovich’s head to an old photo of Yushchenko, the commander explains with a lack of funds.

"As always, there was no money for combat training," he said.

The colonel also says that he does not remember when a poster with Viktor Yushchenko appeared on the test site, "either in 2005 or 2006 year."