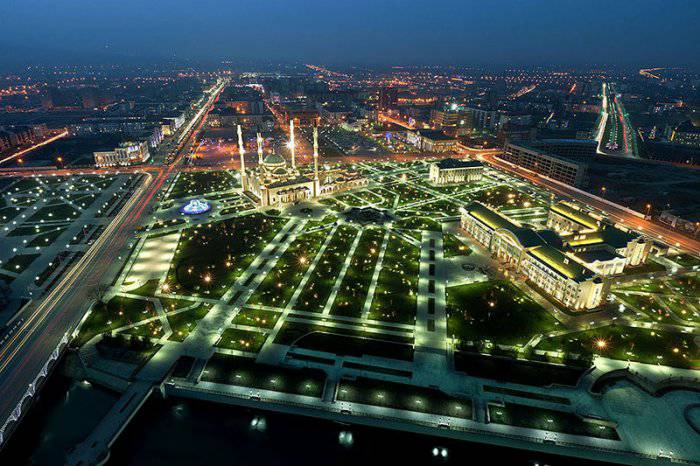 The modern city of Grozny is often compared to the fabulous Baghdad from the Thousand and One Nights. Previously almost completely destroyed, now it amazes with unprecedented luxury and beauty. Chechens are proud of their capital, considering its current appearance "the merit of the freedom-loving spirit of the people."

But the new face of the radiant Grozny is, first of all, a consequence of huge federal cash infusions, at the price of which stability is bought in the recently “hot” republic. Chechnya receives over 60 billion rubles of federal subsidies annually, while the republic’s own revenues are estimated at 6,4 billion. A simple arithmetic shows that the republic is 90% subsidized. True, in these figures there is one nuance.

17 May 2011 in Moscow hosted a round table organized by the Institute for Innovative Development “Search for Ways of Interethnic Cooperation. Identification of the Russian citizen. The participants included high-ranking officials and academics from Chechnya, young communists and prominent figures of the Russian nationalist movement, in particular, the former head of the DPNI Alexander Belov, a representative of the Russian public movement (ROD) Vladimir Tor and others.

During the stormy debate, the question of subsidies was raised. On charges of eating the “Russian budget pie”, Chechen professor, doctor of historical sciences Yavus Akhmadov reported on the main secret of the Chechen budget. According to him, “Chechnya does not receive a single penny, not a single ruble at the expense of the Russian or Khanty-Mansiysk lands”. “Everyone knows the statements of our president:“ Give us the opportunity to produce oil ourselves, and we do not need money from the federal budget, ”he said.

That is, according to Professor Akhmadov (and in this case it can be assumed that he voiced the official position of the republic’s leadership), Chechnya itself earns its money, it’s just Rosneft takes it, and then part of it is given in the form of federal subsidies.

It is difficult to say how accurate such calculations are. However, the fact that, in terms of federal subsidies, Chechnya remains one of the leaders of Russia, and in the long term its level of subsidies should increase - this is a fact. For example, recently the Minister of Economic Development and Trade of Chechnya, Abdulla Magomadov, voiced information about sending to the Ministry of Regional Development of the Russian Federation a project developed in Grozny, which would provide for the allocation of 2025 billion rubles to the republic before 498,289.

Of this astronomical sum 156,2 billion rubles should go to compensate residents for housing lost during the hostilities. It should be noted that since the end of hostilities in the Chechen Republic, compensation to residents for lost property has already been paid many times. However, as can be seen from the above figure, the money was still not enough paid.

Meanwhile, in the State Duma of the Russian Federation, the LDPR faction headed by Vladimir Zhirinovsky held a meeting with representatives of various Russian public movements. It was the occasion for the author of the article to attend this event.

Among the speakers was a representative of Russian refugees from Chechnya, a Terek Cossack Tatyana Chernaya. According to her, compensation for lost housing from 2000 for the year amounted to 34 billion rubles for Chechens, and for Russians and Russian-speaking (and there were about 300 thousand people) 4 billion Russian refugees still huddled in the Stavropol region in plywood barracks and converted barns, give "compensation" in 120 thousand rubles, "which now can not buy a barn."

And this scanty money is given only after a notarized (and for the applicant's personal money, about 15 thousand rubles) refusal of claims for property remaining in Chechnya.

“Many have left houses and apartments there, legally they belong to refugees. Prices for apartments in Chechnya are now 2-3 million rubles, Black reported. - But the Chechens had already moved there long ago. Return and then sell their homes, we can not. If you come to Grozny for your property, they will beat you there. And they offer us to give up their property for beggarly 120 thousand. To fire fighters from forest fires affected by floods - all the authorities are helping, they are building houses. And about us - the Russian refugees from Chechnya - everyone is silent. ”

During the last 20 years, about 300 thousand Russian-speaking residents have fled from Chechnya. The vast majority of them have not returned. However, despite the assurances of the authorities, there is no place for Russians in the “new Chechnya”, and the federal “money rain” is not pouring for them. They are not expected in Chechnya, and they themselves are not in a hurry to go there. Even specialists - doctors, teachers, university professors - do not go to the “Chechen paradise”, although they are actively called and offer high salaries.

People are now leaving the republic, and the representatives of the Chechen intelligentsia rarely mention this in the media. As the author asked at the scientific conference who asked not to mention his name, a Chechen scientist, “an educated, European-minded person in Chechnya is now very hard - first and foremost in the spiritual sense.” “Many, especially young people, flee from the“ Ramzan paradise ”. Young people are trying to go to Europe, it is impossible - they are going to Russia. We, the old people of the Soviet school, are tied to their homeland ... If you knew how we long for the old pre-war Grozny, ”he said.

Chechnya in the local press is called the “safest” republic of the North Caucasus. Indeed, terrorist activity there has declined. But the last year’s attack on the parliament of the republic does not add suicide bombings and continued clashes with particular optimism. Although Kadyrov accused Georgian President Mikhail Saakashvili of preparing and sending terrorists to the republic, the causes of terror are still rooted in domestic public life.

Islamic extremism did not disappear along with Khattab and Basayev. It was and is - this is an ideology based on centuries-old, since the times of Sheikh Mansur, the traditions of “Chechen anti-imperial resistance”. In addition, introduced from the outside, Wahhabism, new to Chechnya, has already become native to many. The very existence of Chechnya as part of Russia, even with super-autonomy, is unacceptable for many Chechens, and this is already a reason to take it in hand weapon.

Explosions and shots will sound for a long time.

The authorities of the “Russian Chechnya” are trying to make their new Chechen ideology an alternative to Islamic extremism, on the one hand, built on Islamic traditions, on the other - on “loyalty to Russia and the Kadyrov family”. The authorities are trying to instill in young people along with Islamic values ​​and the cult of a healthy lifestyle: “Namaz. Wear traditional clothes. Do not drink, do not smoke, go in for sports, read Ramzan. "

But while in Grozny more bravura marches and nostalgic variety art sound. World sports and pop stars, authoritative figures of Russian culture and sports, such as figure skater Irina Rodnina, writer Zakhar Prilepin, singer Philip Kirkorov, come to the capital. Everyone admires the Chechen capital and Ramzan Kadyrov. According to them, Chechnya is a truly prosperous and secure region, and Ramzan Kadyrov is an outstanding state leader.

Football proves these points. Chechnya is a football republic. The team “Terek” thanks to the purchased world-class football players confidently feels in the top Russian division.

March 8 in Grozny, Brazil's national team 2002, beat the "Kadyrov team" with the score 4: 6. And on May 11 at the opening ceremony of the new Akhmad Kadyrov stadium at the expense of the Russian budget (about $ 270 million) of the Akhmad Kadyrov stadium a match took place between the “Caucasus team” and the team of world football stars. The Caucasus team was headed by the plenipotentiary in the North Caucasus Federal District Alexander Khloponin, the head of Chechnya Ramzan Kadyrov was an ordinary player.

In this match, the Caucasians defeated their opponents, including Diego Maradona, with an 5: 2 score. Footballers from the “star team” received a diamond watch and a cash reward of about $ 100 thousand each. In addition to the match at the new stadium, a concert was held with the participation of world pop stars: Ci Ketch, Toto Cutugno, Albano and Ramina Power and others.

Naturally, after an event of this level, hardly anyone would dare to doubt that Chechnya is “a stable, secure, dynamically developing Russian region.”

We are in Yandex Zen
What we lost
5 comments
Information
Dear reader, to leave comments on the publication, you must to register.