Why does Richard Morningstar threaten Azerbaijan with Maidan 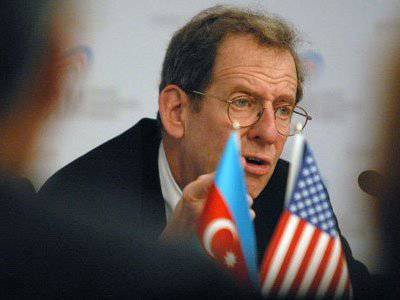 A few days ago, the US ambassador to Baku, Richard Morningstar, giving an interview to the Azerbaijani service of Radio Free Europe / Radio Liberty, made a statement from the category of those that diplomats usually do not allow themselves. The American suggested that one of the lessons that Baku should draw from the events in Ukraine is that the Maidan could be repeated in Azerbaijan if, say, civil society there will be infringed upon its rights ...


Richard Morningstar - known conductor of the interests of Western energy corporations. Prior to his appointment as ambassador to Azerbaijan, he served as the special envoy of the US Secretary of State for Energy Affairs in Eurasia. Having engaged a diplomatic watch in Baku in July 2012 of the year, Morningstar loyally lobbied the laying of routes for the supply of Azerbaijani hydrocarbons to the West "bypassing Russia".

The statement of the American diplomat about the possibility of the “Azerbaijani Maidan” should be read in conjunction with the preceding speech by the American co-chairman of the Minsk Group on the settlement of the Nagorno-Karabakh conflict, James Warlick. The performance took place on May 7 at the Carnegie Endowment in Washington. The considerations expressed by Warlick, and he unambiguously proposed to return to the situation in the Nagorno-Karabakh conflict to the situation of the end of 1980, were met with extreme restraint in Yerevan.

What goals did Washington pursue by inviting its diplomat to make such annoying statements one after the other to the address of both Yerevan and Baku? In May of this year, 20 turned years since the establishment of the cease-fire regime in Nagorno-Karabakh. According to some signs, in Washington, under the influence of the processes of Ukraine’s disintegration and the reunification of Crimea with Russia, it was concluded that maintaining the status quo in the zone of the Nagorno-Karabakh conflict is no longer in America’s interests. If this is true, then this is a very dangerous thought. Especially if, as experts assume, behind this, there is an attempt to make Armenia convinced of the “lack of thought” of its decision to join the Customs Union and put Russia in the face of “failure in the Caucasus”.

The calculation of American strategists is that a new escalation of tension around Nagorno-Karabakh will push Azerbaijan toward NATO with the prospect of forming the Ankara-Tbilisi-Baku axis, and Ankara already has a package of agreements with Baku on guarantees of security and mutual assistance. In this hypothetical triple bundle, in recent years, the military-political component has been intensively increasing. Georgia is the foreman in raising the level of interaction between neighbors in the military sphere. Turkey and Azerbaijan are showing great restraint here, well aware of all the risks of creating a regional alliance unfriendly to Russia in the zone of strategic interests of Russia. However, violation of the status quo in the zone of the Nagorno-Karabakh conflict can change a lot.

From the four countries of the forgotten association GUAM (Georgia - Ukraine - Moldova - Azerbaijan), which Turkey was going to join at certain stages of the run-in of this American geopolitical idea, nowadays only Azerbaijan did not confirm its Euro-Atlantic aspirations. As some Western experts are inclined to believe, the reason for such caution is the “complex neighborhood” of Azerbaijan with Russia and Iran.

The Caspian factor plays a separate role in the US plans to give political processes in the region a confrontational look. The forthcoming summit of the countries of the Caspian Sea in Astrakhan in terms of dates roughly coincides with the September NATO summit in Wales. In Washington, the task is to prevent breakthrough decisions at the September rally of the Caspian Five. The settlement of the remaining unresolved issues on the status of the Caspian Sea does not fit into the American schemes to maintain tension in the region. Therefore, Azerbaijan will be tried not to be allowed to settle its problems with Iran (which Russia is interested in) in delimiting the national sectors of the Caspian Sea. Washington is resisting the creation of the Caspian five mechanisms for maintaining security in the sea-lake only by the riparian countries. Azerbaijan has not previously given a positive response to Moscow’s proposal to create a joint naval operational interaction group (CASFOR) in the Caspian Sea, but now in Baku they are not so categorical, and this alone is annoying to American strategists.

An independent provocative story in a speech by Morningstar was the reasoning on a certain “invasion” in Azerbaijan. The American ambassador expressed hints, of which, however, it followed that the role of potential interventionists in Azerbaijan could be Russia and Iran. In this regard, he several times asked himself a rhetorical question: who, if not America, will be able to help Azerbaijan in this case - “after what Russia has done with the Crimea and Ukraine” ?! In Baku, these figures of the speech of the American diplomat reacted adequately: Azerbaijani officials from the presidential administration and from the foreign ministry regarded it as interference in the internal affairs of their country.

However, the trial balloon by the US administration is running. And this was done a few days before the next meeting of 29 in May in Astana of the Supreme Eurasian Economic Council, on the eve of the signing of the Treaty on the Eurasian Economic Union by the leaders of Russia, Belarus and Kazakhstan.

Ctrl Enter
Noticed oshЫbku Highlight text and press. Ctrl + Enter
We are
Errors of Armenia and the success of Azerbaijan ("Journal of Turkish Weekly" Turkey)Multi-vector Azerbaijan - between Russia, Iran, Turkey and the United States
Military Reviewin Yandex News
Military Reviewin Google News
43 comments
Information
Dear reader, to leave comments on the publication, you must sign in.