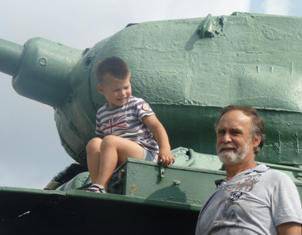 The pests were got at the man. No, not mice and rats, but relatives abroad on the wife’s line.


At the crossroads, their tracks were turned in different directions. The first sipped in full, remaining on his land. The second was brought to the land by Estonians for the best share.

Due to the well-known historical events ran across the bridge over the Narva River border. The land was divided, the country was divided, the people were divided. Now the wife's brother has a new spouse, a different homeland, a surname distorted in the Estonian way.

All it would be nothing ... God be their judge, if not for one thing BUT.

The newly arrived foreigners began their first arrival in some capacity with a contemptuous snort at our reality. And everything is wrong for them, and everything is not for them.

- Your border guards are carping at us. Always some obstacles, show them all, open everything, Madame was indignant.

- We move freely throughout Europe. If Russia treats us this way, we will not come to you again.

- And what should happen to her if you do not deign to visit her? - peeped man.

- Your traffic cops are beasts. They don’t give a pass, they all strive to rob, ”the brother-in-law translated the topic.

- Here in my St. Petersburg video camera was stolen. The police said it was useless to search.

- So there is nothing to open the mitten itself, tea is not at the wedding.

And so, everyone drove and drove, having bit the bit, gritting his teeth. Their grumbling gradually turned into hostility not only to the country, order, but also to the people.

They explained to their children that Russia is “sludge”, their future is only in the West. Having matured, now and they began to hiss, as all Russian do not love. Grandchildren are allowed to speak only Estonian.

And it was thought to the peasant, once you come to visit, you would behave more modestly. But everything went on increasing. He suffered for a long fifteen years, until the inside reared up.

Once all the relatives of my wife's sister gathered for the anniversary. The day the Russian endured, the second survived, but somehow in the evening he asked the foreigner directly in the forehead:

- Tell me, brother, how did you manage to get Estonian citizenship, after all, it turns out that it didn’t give you light.

The reaction was amazing. The man changed his face and suddenly sobered up.

“For special merits,” he squeezed through tightly compressed lips.

“So this,” the foreigner hesitated, “in the ninety-first I participated in the independence referendum, where I was given a green card of the Estonian Congress.

- It turns out that I and your sister voted for a single Union, and you two weeks earlier already betrayed our country, received “Ausvays” for this, hid it between the crusts of the party card, maybe it will come in handy. So what?

All relatives fell silent. A ringing silence reigned around.

- What are you carping? This is only the ability to be more successful, - one of them voiced uncertainly.

“You're just jealous,” echoed the other.

- What's wrong with that! .. The fish is looking for where it is deeper, and a man - where is better. The end justifies the means - summed up the third.

And all at once they piled on the troublemaker. But the man was not going to capitulate.

- If my children and grandchildren happen to enter Estonia, as now in the Crimea, what will you do - shoot backwards or run farther: the stigma of a gun?

It became audible, as the wife sobbed. The attackers, dumbfounded, fell silent.