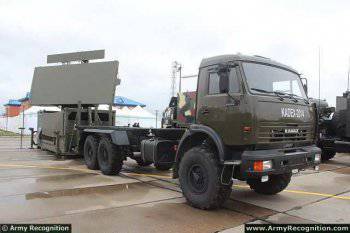 
SKTB "Granit" - the former Alma-Ata production and technical enterprise, which was part of the concern "Granit" of the USSR Ministry of Radio Industry. In the Soviet period, it was engaged in the installation, configuration, docking, government testing and maintenance of test sites and prototypes of electronic missile defense systems and missile attack warning systems at the Sary-Shagan test site. The Granit-Thales Electronics joint venture was created in 2012 for the assembly of the TRS GM400 radar.

Ctrl Enter
Noticed oshЫbku Highlight text and press. Ctrl + Enter
We are
Technique "Uralvagonzavod" at the exhibition KADEX-2014The results of the second stage of the joint antiterrorist exercise of the Ala-Too-Anti-Terror-2013 divisions of the CIS states
Military Reviewin Yandex News
Military Reviewin Google News
46 comments
Information
Dear reader, to leave comments on the publication, you must sign in.