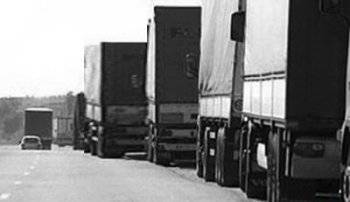 According to the "Russian Spring", The State Border Service of Ukraine reported that the outfit of the border guards of the Lugansk detachment stopped an attempt to illegally cross the Ukrainian border near the settlements of Astakhovo and Novoprokhorovka.


According to the spokesman for the State Border Service of Ukraine, Oleg Slobodian, a column of several trucks, cars and minibuses was seen on May 27 around 3: 40. As a result of the ensuing battle, the border guards damaged and seized two cars and a minibus.

“In 3: 40 (4: 40 MSK), the convoy crossed the state border, where it was met by border guard with fire. A fight started. Violators, leaving a cover group, still broke through to the territory of Luhansk NR in the direction of Anthracite. As a result of the shelling of the column, Ukrainian border guards damaged and captured one minibus and two cars, ”the agency said.

It is worth recalling that on Monday the State Border Service reported that they had been noticed near the Ukrainian border 40 KAMAZ with armed men.

According to the information agency "Vesti", The Ministry of Foreign Affairs of Ukraine passed a note of protest to Andrei Vorobyov, the adviser to the envoy of the Russian embassy in Kiev in connection with the incident on the Russian-Ukrainian border.

“The Ukrainian side expressed a strong protest against the inaction of the Russian state authorities, in particular the border guard service of the Federal Security Service, and noted that such actions are a flagrant violation of the norms of the Treaty of Friendship, Cooperation and Partnership between Ukraine and the Russian Federation 1997 of the Year, the UN Charter, General UN Assembly A / RES / 68 / 262 "Territorial Integrity of Ukraine", as well as the Geneva agreements from April 17, "- said the department of information policy of the Ministry of Foreign Affairs of Ukraine.

In turn, the Frontier Department of the Federal Security Service of the Russian Federation in the Rostov Region denied the fact of illegal crossing of the Russian-Ukrainian border.

Ctrl Enter
Noticed oshЫbku Highlight text and press. Ctrl + Enter
We are
The action “Military service under the contract is your choice!” In Rostov-on-Don: future contract servicemen, exhibitions and “Russian Knights”The situation in the south-east of Ukraine. Chronicle of events. 3 May
Military Reviewin Yandex News
Military Reviewin Google News
182 comments
Information
Dear reader, to leave comments on the publication, you must sign in.