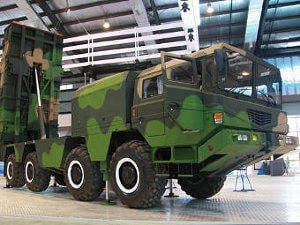 
The complex, which supposedly can hit targets at a distance of 400 kilometers, consists of two types of launchers for different missiles on the same mobile chassis. The index of the new complex is not specified. It is known that it was created by combining two complexes - SY-400 and BP-12A, which are in service with China. On the WS 2400 mobile platform with the 8x8 wheel formula there are two vertical launchers with four missiles each. For the first, borrowed from the SY-400, 400 caliber millimeters are used, and for the second, based on the BP-12A, millimeter 600 caliber.

The technical characteristics of the modular complex are not yet known. Separately, SY-400 and BP-12A have a range of 400 kilometers. Both complexes can be equipped with missiles with different types of combat units, including high-explosive fragmentation, high explosive incendiary and cluster with cumulative fragmentation combat elements. The average weight of the warhead is 200-300 kilograms.

We are in Yandex Zen
Piranha military wheeled vehicles strengthen their position in the global market
Deck tactical transport aircraft C-2 Greyhound
6 comments
Information
Dear reader, to leave comments on the publication, you must to register.