28 May 2014
75
In Abkhazia, restless. There is an acute political crisis. Last night, the opposition, without meeting any resistance, took control of the administration of President Alexander Ankvab in Sukhumi. The incumbent has already agreed to dismiss the cabinet. But this is not enough opposition: she believes that Ankvab himself should give up power. 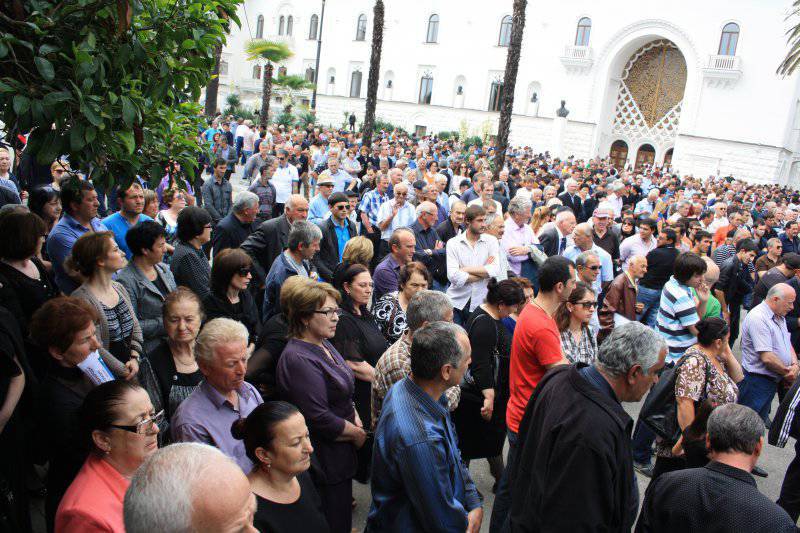 Chairman of the oppositional Forum of National Unity (FNE) Raul Khadzhimba and the head of the public organization of veterans of the Georgian-Abkhaz war Aruaa Vitaly Gabniya participated in the evening talks from the opposition. It was at these talks that the president decided to dismiss the Cabinet.

As for the statements by FENE Chairman Raul Khadzhimba, he said yesterday that the Coordination Council of opposition parties and movements decided to “take over temporary leadership, which will deal with the formation of all the necessary structures.”

Up to ten thousand people, according to some information, participated in yesterday’s protests outside the administration building (“people's assembly”). Ankvab refused to go out to the people.

In the press there is information that about three dozen oppositionists broke into the building through its parliamentary wing. Those who broke in broke everything in their path: windows, office equipment, thereby trying to secure a meeting with the president. But Ankvab was already negotiating with R. Khadzhimba and V. Gabniya, who entered the building, so to speak, through the main entrance.

The Supreme Court of Abkhazia abstained from commenting. Now he is busy that "understands" what is happening.

But the power structures of Abkhazia expressed support for Ankvab. Quote from the joint statement: “We, the leaders of the security forces of Abkhazia, express our utmost concern over the events taking place in the country. Power agencies are out of politics, but we absolutely do not accept unconstitutional methods of struggle that lead to destabilization of the situation in the country. ”

Mayor of Sukhumi Alias ​​Labahua gave an interview to the correspondent ITAR-TASSin which he noted that the situation in the city is stable, no clashes were recorded.

ITAR-TASS recalls that the representatives of the Committee for Social and Political Workers demanded that the President dismiss the cabinet a month ago and also form a package of amendments to the constitution on the transfer of part of presidential powers to parliament and the government. KSOP also wished the Attorney General and the heads of administrations of several districts to be relieved of their posts. The president initially refused to such statements. The information management at the president said that Ankvab "considers such ultimatum demands unacceptable and unproductive."

Alexander Ankvab said on TV that he is discussing options for developments with members of the Security Council. His press secretary even saidthat Ankvab controls the situation in the country.

Thus, the “information” about Ankvab’s flight abroad turned out to be fiction.

Referring to ITAR-TASS, "Vesti" Today they write that the President of Abkhazia has denied information about his departure from the republic.

He said: “My goal and the goal of the actions of my colleagues was to prevent the development of events according to the scenario that would be irremediable for our country.”

In addition, Ankvab said that a large group of people, including armed, seized Abkhaz television. The security forces did not take retaliatory measures in order not to create an irreparable situation.

Ankvab gave the following description of what happened: “Legally, of course, this is an attempt to seize power by force by force”.

According to Gazeta.ru, the opposition accuses the president of avoiding negotiations. He is also blamed for the fact that he allegedly alone makes decisions on the distribution of budget funds that come mainly from Russia.

“There can be no sovereign country filling two-thirds of the budget at the expense of subsidies of another state,” said Vitaly Gabnia at a gathering in Sukhumi yesterday. - The system of sole decision making led the country to bankruptcy, led to default. And it was at the time when Russia allocated 900 million dollars to support the statehood of Abkhazia, which were mastered at stadiums, in swimming pools and houses of culture according to the personal whim of the president. ”

In turn, supporters of the president note that there can be no talk of spending Russian funds at the whim of Abkhaz leaders: after all, the facilities for which Russian economic aid is spent are included in the plan agreed at the level of the intergovernmental commission on socio-economic cooperation. From the Russian side, it is headed by Deputy Prime Minister Alexander Khloponin, and from the Abkhaz side by Prime Minister Leonid Lakerbaya (now retired).

Regional expert Renat Karchaa, whose words are quoted by Gazeta.ru, analyzed the consequences of the 27 events of May for Ankvab: “Maybe he will remain president. But the events of 27 in May will inevitably mark the beginning of the devaluation of the executive branch in Abkhazia: the president, who, under pressure, agreed to the resignation of the government, the prosecutor general and the district heads, is already in a fundamentally weaker position ... This does not mean that the government, the prosecutor and the district heads were ineffective. Prime Minister Leonid Lakerbaia is undoubtedly a very worthy and extremely decent person, and he could have become an ideal premier, but in other, more peaceful circumstances. At the same time, look at people who are striving for power: their program is pure populism. They constantly criticize the president and the government, but when it comes to constructive proposals, they are not provided. ”

Gazeta.ru recalls that the assistance of Abkhazia from Russia in 2013 was expressed in the amount of about 1,8 billion rubles. It is assumed that in the future Abkhazia will receive from Moscow approximately 1 billion rubles. in year. Oppositionists say that they do not want to break the mechanisms of interaction with Russia, and even require a more complete integration of the two countries.

Poet Vladimir Zantaria, one of the opposition leaders, explained Interfax the essence of the demands: “We are trying to bring order to our home, but I want to emphasize that relations between Abkhazia and Russia are sacred for us”.

“On the contrary, we blame, and this was said at the rally today, the current authorities of Abkhazia of insufficient integration with Russia,” he said.

An interesting reaction of the evening event 27 May caused in Ukraine. There in blogs with might and main scribbling about the "Abkhazian Maidan."

As transmits "On the Eve", supporters of the Ukrainian junta represent the conflict in the form of a democracy against the "bad president."

In groups in social networks close to the "Right Sector" and other nationalists, roll the videos of the Ukrainian media several months ago. Crimea, predicted the fate of Abkhazia, "empty cities and three ATMs on the country."

But attentive readers indicate that in Abkhazia they do not want what Euromaidan wanted. On the contrary, the Abkhaz want to integrate even more closely with Russia.

“Guys, read carefully! They seemed to revolt against corruption, but at the same time for closer ties with the racer! So there is a completely different история, they do not think of themselves without a race, "- quotes the resource" Ilona Ilona "(we publish without editing. - Ed." IN ").

“There, the pro-Russian opposition seized power, which demands immediate adherence to Russia. Just because Russia annexed the Crimea, Abkhazia became indignant. After all, how many years they promised to join, but never joined. So they rebelled. You bet ... Well, another headache for Putin. Well, he never wanted to attach the “gray territories”, ”writes Alexander Vetrova.

And now - a few career facts from the biography of the central opposition leader Khadzhimba.

October 3 2004 was the year in Abkhazia, a presidential election was held in which Khajimba lost with a bang. Most of the votes were received by his rival Sergey Bagapsh. Khajimba did not recognize the election results and arranged a butch accompanied by the seizure of administrative buildings. In Abkhazia, they even decided to hold elections again. True, law enforcement agencies supported Bagapsh and the Council of Elders of Abkhazia. There was an opposition, which almost resulted in a civil war. Everything was settled in December 2004 using Russian mediators V. Kolesnikov and S. Baburin. Repeated presidential elections were held in January 2005. As a result, Bagapsh became president, Khadzhimba - vice-president.

On this high, but not the first, chair, our hero sat until 2009, until he himself announced his resignation. He created an opposition initiative group (FNE), and in the same year 2009 participated in the new presidential elections, which again lost to the same Bagapsh.

In August 2011, presidential elections were held. And Khadzhimba ... lost again! He scored less than twenty percent of the vote. Ankvab was declared President of Abkhazia, having received almost 55% of the vote.

Probably, Khadjimba will not calm down until he becomes president.

Observed and commented on Oleg Chuvakin
- especially for topwar.ru
Ctrl Enter
Noticed oshЫbku Highlight text and press. Ctrl + Enter
We are
Another political fever in AbkhaziaResults of the week. “He who does not regret the collapse of the Soviet Union, has no heart; who wants to recreate it in its previous form, he has no head "
Military Reviewin Yandex News
Military Reviewin Google News
75 comments
Information
Dear reader, to leave comments on the publication, you must sign in.