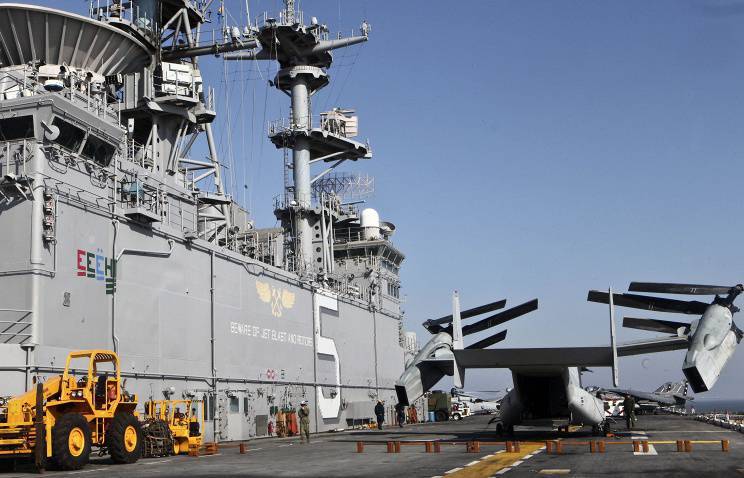 The United States sent a Bataan landing craft to the Mediterranean with thousands of marines aboard due to the worsening situation in Libya.


According to Pentagon officials on Tuesday, US troops can be used to ensure the security of the US Embassy in Tripoli and the evacuation of its personnel to their homeland.

According to some reports, Bataan, who participated in international military exercises with the armed forces of Jordan, on Tuesday passed through the Suez Canal from the Red to the Mediterranean Sea. Earlier, in connection with the exacerbation of the situation in Libya, the United States moved around the Marines 250 and several Osprey convertiplanes from its base in Spain to Sicily.

On May 27, the leader of the Benghazi-based Salafi extremist group Ansar al-Shari'a ("Supporters of Sharia") Mohammed al-Zahawi said that Libyans should dissociate themselves from the anti-Islamist campaign of retired General Khalifa Haftar, who is "waiting for the fate" of Muammar Gaddafi.

“Do not listen to those who are trying to split our ranks,” he pointed out, appealing to local tribes, first of all, to convince “their sons not to take the side of the insurgency.” The militant leader also accused Haftar of being a "agent of American intelligence."

Haftar launched the military operation "Dignity of Libya" on May 9 in Benghazi against radical Islamist groups. The troops loyal to him clashed with extremists terrorizing the local population, including the Ansar ash-Sharii militants. Over two days of fighting, over 16 people died and hundreds were injured.

We started the operation under the code name "Dignity of Libya", which shook not only our country, but the whole world. And now we want to exterminate all extremists and terrorists. We do not want any of the “brothers” to be on Libyan soil, and will not allow anyone from this group to remain in Libya. We will not back down until we finally deal with them, al-Qaeda or others, which are nothing but branches of the "brotherhood" under various names

The Haftar initiative, which the central authorities blamed for the coup, found a wide response in the ranks of regular troops, semi-official armed detachments of ex-revolutionaries, a number of politicians, local tribes and eastern militias of Cyrenaica. Earlier, the general repeatedly stated that he did not recognize the General National Congress (interim parliament) that had lost its legitimacy and the new government approved by him under the leadership of Ahmed Maityg.

"We and our allies are determined to fight in a tyrant Haftar," said al-Zahaui. "If he is committed to this dirty war, he will open the gates of hell ...". The extremist also warned the United States against any intervention in the events taking place in Libya.

“I would like to remind the Americans about their defeats in Afghanistan, Iraq and Somalia, because if they intervene, then something much worse awaits them,” he stressed. “It was America that convinced Haftar to draw our country into war and bloodshed.”

The Ansar al-Shariya group appeared after the victory of the so-called February 17 revolution and the end of the civil war that led to the overthrow and murder of Gaddafi. The leaders of this structure set themselves the goal of creating an "Islamic Emirate", positioning themselves as "defenders of Muslims", not recognizing "democracy, secular regimes and constitutions." Earlier, its leaders have already said that Haftar "declared war on Sharia and Islam."

The militants of the group, which Washington added to the lists of terrorist organizations, are accused of involvement in the attack on the US embassy in Benghazi September 11, which resulted in the death of United States Ambassador to Libya Christopher Stevens and three more Americans. Meanwhile, the "Ansars" categorically reject all accusations.