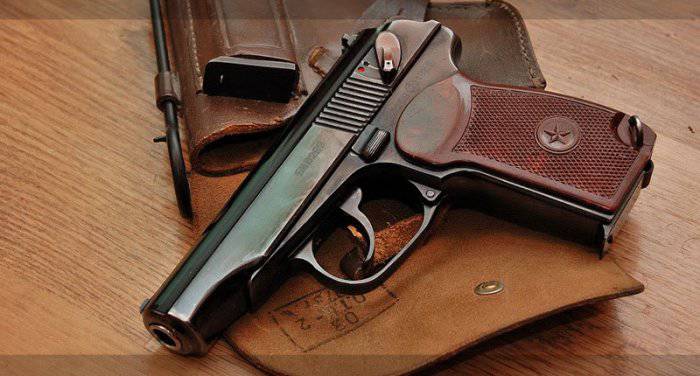 From 1951, the 9-mm PM was officially adopted by the Soviet Army, which still faithfully serves people in uniform.

- Unlock the fuse!
- Shutter!
A click of the bolts is heard, further sounds, a military man will not be confused with any others - the control descent and the fuse of the pistol. The equipped magazine is inserted into the handle, the pistol is put in a holster.

PM - familiar and reliable weapon military. But not everyone knows that this year Makarov is celebrating its anniversary - sixty years ago it was officially adopted by the Soviet Army.

Like the Kalashnikov assault rifle, the PM has long been a legendary weapon. Makarov pistol was produced almost half a century, only in the Soviet Union it was made more than two million pieces. PM was manufactured in Germany, Yugoslavia, China and many countries. However, let's do everything in order.

The last volleys of the Great Patriotic War died down, in which submachine guns, in particular PPSh (Shpagin) and PPS (Sudaeva), became popular small arms. Powerful and quick-fire, they enjoyed the love of not only the rank and file and sergeant personnel, but also the officers.

At the same time, simple in design and designed for a fairly powerful cartridge, but cumbersome and somewhat capricious (for example, due to design features, lack of a fuse — a random shot could occur at a fall on a hard surface) 7,62-mm self-loading TT pistol (Tula Tokarev), which was in service with the 1933 year, is clearly outdated, and it was decided to replace it with a more modern personal weapon.
Already at the end of 1945, tactical and technical requirements were developed and a competition was announced for the manufacture of pistols of two calibers - 7,65mm and 9mm. They should be light and more compact than the TT, and the choice of a slightly larger 7,62-mm caliber compared to Tokarev (9-mm) was due to the fact that by that time the corresponding cartridge had been developed effective in close combat — a larger-diameter ball does not “pierce” the enemy through, but “discards” it, and therefore disables it from the first shot. The final decision on the caliber of personal weapons was postponed until later when the prototypes were tested.

In the autumn of 1947, the first ground tests of pistols were carried out, which were presented as designers known at that time (the caliber of samples provided is indicated in parentheses) - Pavel Voevodin (9-mm), Sergey Korovin (7,65-mm), I. Rakov (7,65- mm), Sergey Simonov, better known as the designer of the SKS self-loading carbine, Konstantin Baryshev (9-mm), and little-known Nikolay Makarov (7,65-mm and 9-mm), Anatoly Klimov and Alexander Lobanov (7,65-mm).

According to the principle of operation of automation - the use of recoil free shutter - they were similar, by design features - different. For comparison, foreign guns Browning M1910 / 22, Walther PP, Sauer M38H (7,65-mm), Beretta M34, CZ 38 (9-mm) were tested, and the same TT was used as a control sample.

We will not go into the details of the tests - they are interesting, first of all, to specialists. We only note that the 7,65-mm Makarov and Korovin pistols and the Makarov and Baryshev 9-mm pistols were recognized as the most reliable and “most tenacious”. Makarov was simple in structure and in maintenance, there were 27 parts (7,65-mm sample - 25), its competitor - ten more. And although Baryshev's pistol was better at the accuracy of fire, and the first shot was made faster from it, the Makarov still surpassed it in the reliability of the automation. According to the test results, the fighting qualities of 9-mm cartridges were recognized as the best, the designers were offered to eliminate the identified shortcomings in a short time.

The next tests took place already in the spring of 1948. The already mentioned Makarov and Baryshev pistols were joined by an 9-mm specimen of Georgy Sevryugin, who had not previously participated in the competition. The championship again received the PM, and the commission concluded that it "can be recommended for the production of the series and subsequent military tests." In fact, it was granted "good" for the future and, as it turned out, the long life of the famous "Peem" - after three years it was officially adopted ...

The designer himself explained his success with a colossal work on the creation of a pistol: “Suffice to say that I worked daily at that time, practically without days off, from eight o'clock in the morning until two or three o'clock in the morning, as a result I modified and shot samples in two , and even three times more than my rivals, which, of course, made it possible to perfectly work out reliability and survivability. "

In 1967, a silent pistol (PB), created on the basis of the PM, was adopted by the army intelligence groups and special units of the KGB of the USSR. It was equipped with an integral silencer, which, unlike most similar systems, consisted of two parts. This made it possible to keep and carry a pistol with the front part of the muffler removed, and before using it, quickly install the nozzle, however, the gun retained the ability of firing even without a muffler. From the base model, the PB inherited the design of a trigger mechanism with self-cocking and a fuse located on the left side of the bolt, the store was also a native Makarovsky. The main difference from the prototype was that it was impossible to place a return spring inside it through a small length of the gate. She was in the handle and pressed on the shutter with a long moving lever. As mentioned above, the Makarov pistol was produced not only in the USSR, but also in many countries of the socialist camp.

Successfully release its analogues in our days. For example, the Chinese state corporation "Norinko" produces a combat version of a pistol called the Type 59, which is no different from the Soviet PM, except for factory markings on the bolt, as well as a sports version, which is mainly exported.

In the German Democratic Republic, the Makarov pistol was made by the Ernst Telman People’s Enterprise under the Pistole M trademark. The fall of the Berlin Wall and the unification of Germany became a real test for the plant — the GDR army was disbanded, respectively, and there were no government orders for weapons. However, soon Western investments helped restore production, and since 1994, the plant, which is now called “Jagd und Sportwaffen Gmbh,” began to produce a modernized version of Makarov.

The Czech analogue PM is produced at the Czech Zbroyovka plant, which has been in the city of Brno for almost 30 years. In 1982, the Czechoslovak army adopted a new pistol cartridge, which was similar in size to the 9х18 PM cartridge, but had a 20 percent reinforced charge, as well as a new pistol for this cartridge - “armadni pistol vz. 82. This gun was almost no different from the “big brother”, except that the fuse was located not on the gate, but on the frame, and the Czech PM store had a bigger one — not on the 8, but on the 12 cartridges. Simultaneously with the release of the military version, the production of a commercial one began, under the 9x17 Browning and 7,65 x17 Browning cartridges, which was called CZ-83. It should be noted that such pistols were very successfully sold for export. In 1992, in order to reduce costs, the production of pistols vz. 82 and CZ-83 were combined under the common name CZ-83. Now the weapon is produced in three calibers for the needs of the Czech security forces, and for free sale.

Several commercial versions of the good old “Peem” are being released by Ukrainian gunsmiths, who recycle the old firearm chambered for traumatic action. Such “traumatics” are produced using an identical technology - replacing the barrel with a “rubber-cutting” one's own production, replacing the return spring with a softer one, other manipulations to weaken the structure (drilling, etc.). Back in the 1990s, no one could have imagined that a civilian would be able to quite legally acquire an “almost real” PM. Somewhat later, Makarov pistols, recognized as excessive military property, began to be made "traumatic" by specialists from the Central Artillery Armament Base of the Armed Forces of Ukraine. The novelties were named PMR (or PMR-1) and “Viy”. As for the latter, then, alas, the first “rubber shooters” “Viy” did not please their customers - the pistols were assembled very poorly, and often from parts from different “Makarovs”!

But the later series of “traumatic” are made more carefully, they have a decent appearance and better workmanship ...

However, let us return to the “combat” biography of the Makarov pistol. In the 90 of the last century, Russian gunsmiths developed a modernized version of a Makarov pistol - PSM. He had a magazine for 12 cartridges, a large initial velocity of the bullet - 430 m / s (PM - 315 m / s), but lost the balance of the predecessor: the use of a more powerful cartridge cost him a loss of reliability. A few years later, the Russians adopted the pistol designed by Vladimir Yarygin. It is assumed that he will soon completely replace the “pensioner” of “Makarov”.

Vinnitsa scientific and production association "Fort" also developed and manufactured many samples of pistols that fully meet modern requirements. But the chronic shortage of funds does not allow rearming the security forces with their latest models. So, the grandfather "Makarov" will serve all people in uniform. It may be true that sixty is not old age, but maturity ... 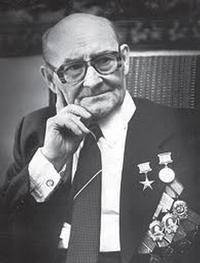 Nikolai Fedorovich Makarov was born on May 9. 1914. in the village of Sasovo, Tambov Province. After graduating from the factory school, he worked as a mechanic to repair steam locomotives. In 1936, he graduated from the Tula Mechanical Institute. During the Great Patriotic War, he worked in a factory where the famous PPShs were made - Shpagin submachine guns.

Makarov began an independent design activity in 1943 year, taking part in the design competition for a new cartridge for the Soviet Army. In 1945, he went to work at the Central Design Bureau, where he worked until retirement.

In addition to his most famous brainchild - Makarov pistol - he participated in the development aviation guns AM-23, anti-tank missile systems "Fagot" and "Competition", which at different times were adopted by the Soviet Army. The contribution of the talented gunsmith to the country's defense was marked by the Golden Star of the Hero of Socialist Labor “Hammer and Sickle”, two orders of Lenin, the Order of the Red Banner, the Stalin and State Prizes.

However, Nikolai Fyodorovich owns several quite peaceful inventions. Yes, he invented the design of sealing glass jars with the glass cover pressed by a spring clip, and after retirement at the request of his wife, Nadezhda Yakovlevna, he invented a machine for rolling home canned food.
Ctrl Enter
Noticed oshЫbku Highlight text and press. Ctrl + Enter
We are
Pistols of Russia - expert opinionAnti-terror weapons
Military Reviewin Yandex News
Military Reviewin Google News
19 comments
Information
Dear reader, to leave comments on the publication, you must sign in.