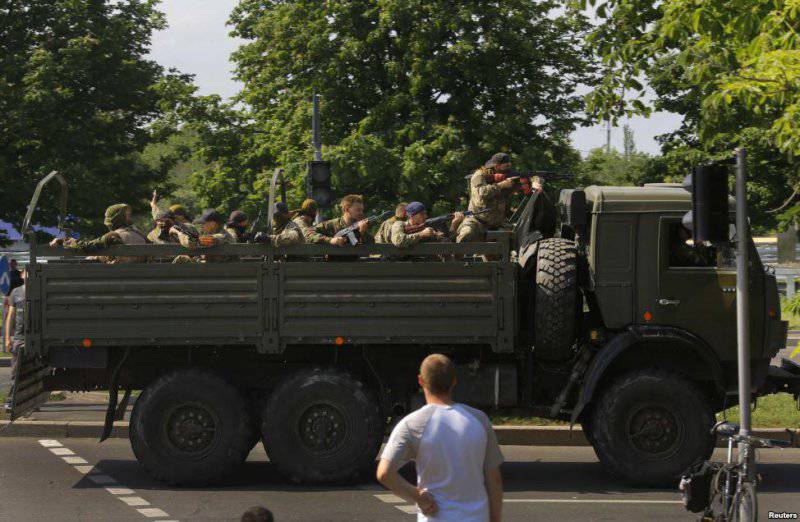 The attack of Bandera punitive in Donetsk with the use of aviation right after the “presidential election” with the filing of the “freshly baked” Poroshenko says that this is not only a pre-planned operation - this is a new strategy of the Kiev junta, or rather, of Washington behind it. This, apparently, is the price of Poroshenko’s approval for the presidency of Fashington - a bloody sweep of Donbass. And he is so motivated that he promises to "restore control over the East of Ukraine" in a few hours.

And just as inadequate. Oleg Tsarev issued a statement that "fast ATO" means huge casualties among the civilian population. " But this is not at all an obstacle for punishers, judging by the “quick” sweep of Odessa. In a few hours, you can arrange a massacre, as punitive in Odessa did, but you can not "regain control" of the two regions, in which an active confrontation has been going on for a month already, and the militia of New Russia have noticeably strengthened their positions. Therefore, the State Department chose it on him, and therefore this “moor” was given way by Tymoshenko - so that he would do “his dirty business”, after which his “leave”.

Thus, the gangster episodes of the beginning of the "work activity" of this oligarch are only confirmed. This is not the president of the country in the usual sense of the word, it is a “president-cleaner”, and he is lonely and has not been able to even get his own “political power”. (Therefore, by the way, it will be easy to “quit” it when needed.)

What will Russia say on this move of faschington? Putin, in a telephone conversation with Italian Prime Minister Matteo Renzi, "stressed the need for an immediate cessation of the military punitive operation in the south-eastern regions and forging a peaceful dialogue between Kiev and representatives of the regions."

Two points are noteworthy here: 1) the requirement of “immediate termination”; 2) the name of the military operation "punitive". In fact, the failure of these demands of the Kiev junta is a sufficient pretext for the already announced entry of Russian troops to protect the civilian population of Donbass. But the global political situation prevails: the State Department is clearly seeking to provoke Russia with bloodshed in the Donbass to send in troops in order to pass it off as “Moscow’s aggression”.

However, Moscow can answer more subtly, asymmetrically, for example, according to the Syrian scenario of Fashington himself. Indeed, why should Russia not turn its strategy against him?

The junta's use of aviation in the millionth Donetsk, shelling from Slavyansk howitzers is enough reason to accuse the Washington of the escalation of violence in the Donbas, because it stands behind the junta, and it is not difficult to prove it! Then somehow recognize Novorossia, whose referendum Russia “respects”, after which you can openly provide it with non-lethal and humanitarian aid. After all, the same recognized Fashington "Syrian rebels" and assists them.

This, of course, is a clear counterattack on the State Department, it is “fraught”, but other options are worse. The well-known political scientist Yevgeny Satanovsky reasonably believes that "the chances that the current government in Kiev will be heard by the authorities in Kiev are not just minimal - they are zero." Because Kiev fulfills the order of Fashington.

By the way, this explains the use of the letter "F" in the designation of the capital of the United States.

If the States brought fascists to power in Ukraine, ordered them to carry out “punitive operations”, whitewash them and give them a “political roof”, then they also smell very fascism. "If something looks like a duck, walks like a duck, quacks like a duck, then this is a duck."

Ctrl Enter
Noticed oshЫbku Highlight text and press. Ctrl + Enter
We are
Situational analysis of the death of the MH17 flight (Malaysian Boeing 777), made on the basis of engineering analysis from 15.08.2014Results of the week. “You are already indebted to the sea: neither the bottom nor the coast”
Military Reviewin Yandex News
Military Reviewin Google News
337 comments
Information
Dear reader, to leave comments on the publication, you must sign in.