28 May 2014
9
Paul Mauser - the famous German designer small weaponswho founded the company for its production. He was born 27 June 1838, in the small town of Oberndorf on the Neckar. Among his designs are weapons that have long outlived their creator. Among the weapons he created, the Mauser 98 rifle, the Mauser C96 pistol, and the Zig-Zag revolver were the most famous. In 1912, for his outstanding contribution to the development of German weapons, Mauser was granted a baronial title, von Mauser. The designer passed away on 29 on May 1914, at the age of 76. He died before the outbreak of World War I, and his Mauser 98 rifle remained the main weapon of the German infantry until the end of World War II.


Paul Peter Mauser did not accidentally become a gunsmith. He was born in the town of Oberndorf on the Neckar in the family of the blacksmith of the Württemberg Royal Arms Factory. At the same time, Mauser was the 13 child in the family. From the 12 age, he began working in the same weapons factory where his father worked. He started working before he graduated from elementary school, which only happened in 1852 year. After completing school, the future designer continued learning the skill of a gunsmith. In 1859, he was called up for military service. Mauser got into artillery and served on the basis of the Ludwigsberg arsenal, which only strengthened his choice of future profession. On duty, he thoroughly studied the mechanism and scheme of work of artillery guns, and after demobilization began work on the creation of a breech-loading gun of small size.

It was this gun and projectile for her that became the first inventions of the design engineer Mauser. In 1865, he was able to improve the mechanism of the breech of the Prussian needle-gun, he later refined this invention, significantly improving its ignition device. It was a time of widespread introduction of cartridges with a metal sleeve, which was already common among hunters and was first used in battles in 1861-65 during the American civil war. 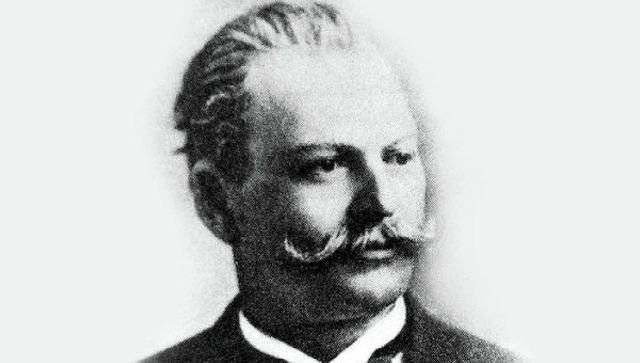 In 1868, the designer, together with his brother Wilhelm and American Charles Norris, patented in the USA a new breech-loading rifle, which received a combat lamellar spring in the bolt handle. At the same time, the Mauser brothers worked on improving the design of the gun bolt, while in Belgian Liege. At the same time, the caliber of rifles went down to the 4 lines all over the world. Then such small arms interested all European armies. At this time, Wilhelm, who showed great craving for commerce, was trying to get government orders from the German states. From 1867 to 1870 he negotiated with Austria, Prussia and Bavaria.

The brothers demonstrated their offspring, the 11-mm (4,3-linear) rifle, in 1871 on the basis of the Prussian Royal Rifle School located in Spandau. The rifle presented by the brothers made a very good impression on the military and, after making a number of changes in its design, was put into service under the designation Gewehr 1871 (Gever). In the same year, Prussia and Württemberg, which immediately ordered 100 thousands of rifles, were put into service.

The recognition of a successful rifle and a large order for it, the commercial talents of brother William Mauser, as well as the help of the Federal Bank contributed to the fact that the brothers bought the Royal Armory in their hometown, where their father worked, from the Württemberg government. So the world-famous company called “Brothers Mauser and Co.” was born. During this period, the brothers are actively working on new models of small arms. Paul Mauser in 1877 presents a 9-mm single shot gun equipped with a vertical slide gate. In 1878, the company produces a revolver, which was equipped with a drop-down frame and a rising breech section of the barrel and drum. It was implemented the possibility of simultaneous extraction of all spent cartridges (the so-called fracture). 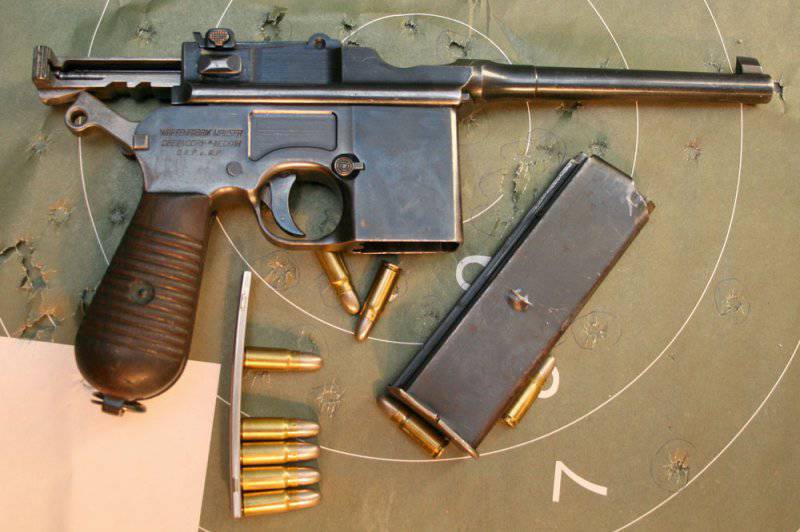 Pistol Mauser C96
After the spread of smokeless powder, Peter Paul Mauser creates a small-caliber rifle, in the likeness of which almost all subsequent types of small arms will be produced in the future. The main feature of the novelty was that it had a magazine box with a clip (it was located outside the breech with a shock mechanism). The cartridges in the cage were staggered, they were sent to the chamber using a special handle, which was located in the rear part of the rifle bolt. After a short time, various modifications of this rifle were adopted by more than 20 countries of the world.

This period of the designer’s life was darkened only by the death of his brother Wilhelm, who died in 1884 year. From this point on, the burden of managing the arms factory fell on the shoulders of Paul Mauser himself. Only after the company was transformed into Waffenfabrik Mauser AG, and a new person was appointed to replace the director, was Mauser able to return to the development of various weapon systems. In 1886, the designer demonstrates the first K-86 self-developed pistol, which received a tubular magazine located under the barrel. In the 1895 year, he creates another pistol, designated Mauser C96, the model began to be produced from the 1896 year.

It is curious that this his most famous pistol first lost two competitions. At first he was not needed by the military in Turin, and then in Bern. Despite the fact that the gun was not initially adopted by any of the European armies, it was widely spread and quickly became popular. The armament of the army of Germany, Czechoslovakia and several other countries, this gun was adopted only in 1908 year after its modernization. This gun is widely known to Russians, mainly for artistic paintings. "Mauser" became popular because it was an integral part of the image of the commissioners of the Civil War or Chekists. The German pistol was as much a part of their image on TV as a leather jacket with an indispensable scarlet bow.

Gewehr 98 rifle
The characteristic and memorable appearance of the pistol provided his holster-butt, made of walnut. On the front section of the butt there was a steel insert with a fixing mechanism and a protrusion for abutting the butt to the pistol grip. The use of such a butt allowed to bring the range of aimed shooting from the "Mauser" to 100 meters, which is a serious distance for any pistols.

However, the Mauser 98 rifle, which was adopted by the German army 5 on April 1898, brought even greater fame to the designer. In German sources, it is designated as Gewehr 98 or abbreviated as G98. This rifle, chambered for 7,92x57 mm, became one of the most successful small arms of the entire XX century. For the first time in combat, she was tested in 1900-1901 years in China during the suppression of the so-called "Boxer Rebellion". Today, the Mauser 98 rifle, along with other rifles of other manufacturers that are structurally similar to it, and having a different official name, is considered the most widely used. stories non-automatic rifle. In total, according to experts, more than 100 million of such rifles were produced in the world, including both military and civilian samples (for example, hunting). With such a volume of release can argue only one more sample of small arms - the famous machine gun Mikhail Kalashnikov.

The G98 rifle has become one of the most well-known among all non-automatic magazine rifles in the world. None of the more or less large-scale military clashes on the planet in the first half of the last century could not do without using this sample Mauser rifle or members of its extensive family. This rifle remained in service after the end of the Second World War, having successfully outlived its developer. Today, along with the C96 Mauser pistol, it is an indispensable attribute of feature films and computer games about that period. 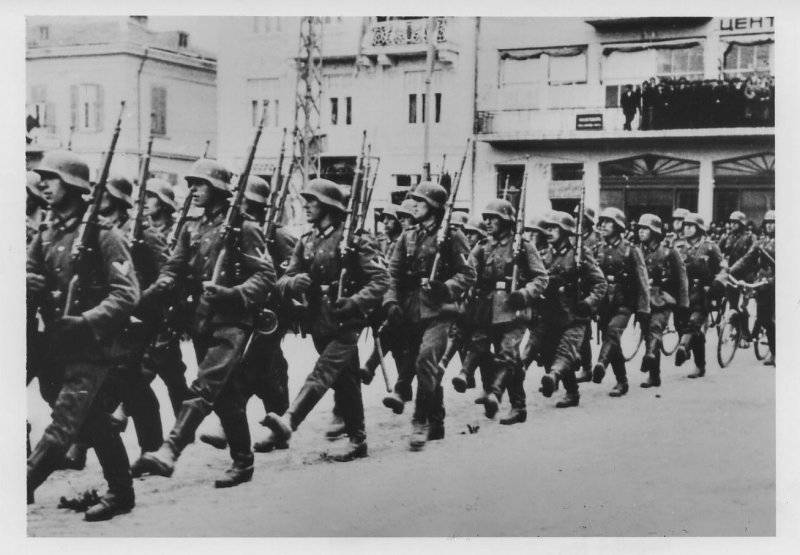 Peter Paul Mauser continued to get involved in small arms until the end of his life, he really loved his work. Until the last moment, he appeared in the enterprise one of the first hours of the morning in 7. He personally discussed all new ideas and intentions with his leading designers. In the last years of his life, he won a large number of awards. In 1912, he was awarded the title of Baron, elevated to the nobility for his services to Germany. In the same year 1912, he was awarded a medal from the Association of German Engineers. In addition, von Mauser was a knight of the Prussian Order of the III degree, the title of commercial adviser (starting with 1898 year) and many other awards.

The gunsmith died 29 on May 1914 of the year from emboli. He died at the age of 76 years in his hometown, not having lived a few days before the outbreak of the First World War - one of the biggest conflicts in the history of mankind and one of the most serious tests for the weapons developed by him.