Invisible ship of the XXI century

As the US Navy Assistant Minister for Research and Development, Sian Stackley, noted, the increase in the cost of ships is due to a change in the schedule of work to speed up the delivery of destroyers and the influence of sequestration of the military budget.

Initially, the command of the Navy planned to build over 30 destroyers of a new type, but due to a sharp increase in cost, the program was completely revised in 2010, and the number of ships in the series was reduced to three units. 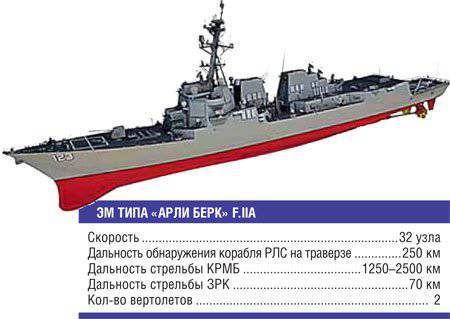 The development of the concept of the destroyer began in 90-ies in the framework of the program DD (X), which 7 of 2006 in April was transformed into the program DDG-1000.

The construction of the Zumvolt-type EM was launched in 2007. The lead ship "Zumvolt" DDG-1000 was laid in 2010-m at the shipbuilding plant (CVD) of the Northrop Grumman company in Pescagola, the second one - "Michael Monsor" DDG-1001 on the CVD of the General Dynamics Bat Iron Works in the city of Bath . Their commissioning is expected in 2015 year. In 2012, financing for the construction of the third destroyer began.

New destroyers are actually cruisers and as part of the Navy will be experimental combat ships. In the US Navy, one or two ships were repeatedly built, on which new technologies were developed, which were widely used in the future. In 50-s, the new main power plant (GEM) was worked out in this way, then the concept of URO frigates later reclassified in cruisers, and a number of others.

The destroyer of the new generation is supposed to be implemented:

-the concept of stealth in the maximum amount, which will give him the opportunity to destroy any aircraft before it is detected itself. Thus, the principle of equal protection from air attack weapons (equal ranges of mutual detection and destruction) can be implemented in this EM, which will allow it to become an invisible ship of the 21st century. In this regard, much attention is paid to the development of external architectural forms (the shape of the body “cutting the wave”, the integral one-block superstructure, etc.);
-new approaches to ensuring the protection of EM, namely the use of a two-layer surface structure protection (NCP), when the inner side is a citadel, and the outer one performs the function of a platoon screen. The submerged position of the ship increases its survivability, according to experts, two to three times;
-autonomous ventilation scheme that provides absolute protection of the crew against chemical and bacteriological weapons in the face of increasing threats from international terrorism;
- along with traditional weapons systems such as long-range cruise missiles and missiles, there are fundamentally new weapons systems. These are operational tactical missiles LASM and ALAM, 155-mm artillery mounts with guided projectiles, UAVs, airborne multi-purpose combat boats, RMS anti-mine defense system, airborne and ground-based detection means, communications with conformal phased antenna arrays;
-the use of the GEM with full electric propulsion and steering columns;
-increasing the degree of automation of the management processes of technical equipment and armaments to reduce the crew size to 142 people, while at the Arly Berk-type EM and Ticonderoga-type cruisers the number of the crew reaches the 300 people.

The lead ship DDG-1000 "Zumvolt" is named after Admiral Elmo Russell Zumvolt, who began service on the destroyer "Robinson" during World War II and distinguished himself in the battle for Leyte Gulf.

Destroyers of the "Zumvolt" type are designed to provide fire support in amphibious operations and combat operations in coastal areas, launching missile and artillery strikes against ground targets, including deep in the enemy's territory. The most important task of the ships will be the provision of zonal air defense and missile defense of carrier-based multi-purpose groups. 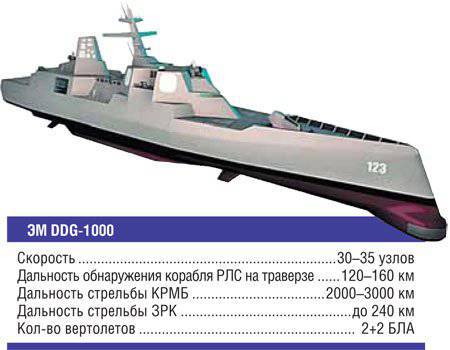 The destroyer has a two-shaft main power plant with full electric propulsion - a single power plant. In this case, the main electric motors - submerged electric motors (HED - SEM) are located in the nacelles of the steering column. As the main engines for driving the generators, two GTE RR WR-21 or two to four GTE LM2500 of a new modification will be used.

The ship’s armament system consists of a multifunctional AN / SPY-3 multi-function radar with a phased array antenna and a universal vertical launcher (UHF) of the Mk.41 type on 80 cells placed along the sides (two groups in the bow and the stern) . The UVPU will load sea-based cruise missiles, anti-aircraft and anti-submarine guided missiles. Anti-aircraft defense is provided by the standard-type anti-aircraft missile system as part of the IFRS. Artillery armament should consist of two 155-mm AU, firing guided artillery shells with rocket boosters such as LRLAP (Long Range Land Attack Projectile) at a distance of 185 kilometers, and two 57-mm small-caliber anti-aircraft artillery systems (MZAK). The destroyer may have ammunition in 600 UARS LRLAP (300 projectiles for each AU), as well as additional projectiles. The ship is supposed to be equipped with a hydro-acoustic complex with an antenna in a bulb fairing and with a flexible extended towed antenna (GPBA), a sonar mine detection station (GASMI) and two uninhabited RMS submersibles.

Aviation armament is represented by two helicopters MH-60R or one MH-60R + 3 UAV.

The total displacement is 14 564 tons, the maximum length is 182 meters, the width is 24 meters, and the draft is 8,4 meters. The power of the main power plant - 104 is thousands of horsepower, the full speed is 30 knots, the cruising range is more than 10 thousands of miles, the crew is 142 man.

Naval experts note the innovativeness of the new destroyer. In particular, the arms analyst at the Lexington Institute, Lauren Thompson, believes that Zumwelt is a kind of bridge between glorious traditions and new realities of total informatization and the wide distribution of high-precision weapons. "The concept of this ship is not different radical changes, the main task of the designers was the realization of the idea of ​​multipurpose use of the destroyer, which is one foot in the present, and the other in the future," said Thompson.

Ctrl Enter
Noticed oshЫbku Highlight text and press. Ctrl + Enter
We are
Meet Zumwalt! The invisible destroyer of the US Navy will be released into the sea next springDestroyers of the type Zumwalt. On the current state of the ships of the future
Military Reviewin Yandex News
Military Reviewin Google News
22 comments
Information
Dear reader, to leave comments on the publication, you must sign in.