The United States calls Lithuania responsible for the Ukrainian crisis 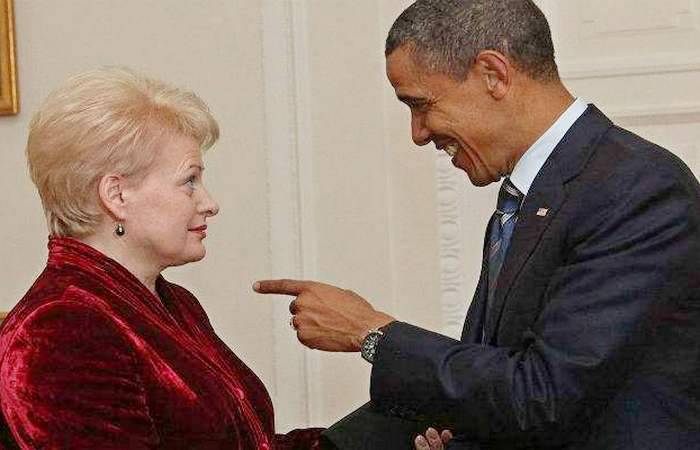 The National Interest, the most influential American publication in the field of international relations, writes that the Ukrainian crisis was provoked by the position of Poland and Lithuania, who wanted to expand the European Union at any cost at the expense of Ukraine. For the EU, whose representatives have previously spoken about Lithuania’s responsibility for negotiations with Yanukovych, which ended in a failed Vilnius summit, this position of the American allies means a blank check to finally lay the blame for the crisis on Lithuanian diplomacy and personally on Dalia Grybauskaite - to put her on the table and "switchman", which alone is to blame.

“The National Interest” is not only one of the most respected publications for international affairs, political scientists, academic scientists and political consultants around the world. It is also a desktop magazine for the political and diplomatic establishment of the United States, expressing the views of the most influential circles of the American elite.

The monthly is estimated as an expert publication, which is related to US Secretary of Defense Chuck Hagel, one of the leaders of the Republican Party, as well as one of the most influential representatives of the high circles of Republicans in foreign policy in Washington. Outstanding contemporary thinkers such as Richard Pipes and Francis Fukuyama are collaborating with the magazine, who a quarter century ago published in National Interest, which became a stage in the development of a number of social sciences, the article “The End stories? ”Honorary Chairman of the Editorial Board - US Secretary of State under Presidents Nixon and Ford, Nobel Peace Prize laureate Henry Kissinger. In a word - a mouthpiece of American diplomacy in the global expert-political community.

And now this horn probes the ground in order to place responsibility for the Ukrainian crisis on the European Union, and especially on Poland and Lithuania.

“In fact, it happened that the European Union made porridge and does not want to clean up after itself. Worse, he doesn’t want to publicly admit his part of the blame (and this is a significant part) of the crisis in Ukraine and Putin’s adventurism, ”writes the deputy editor-in-chief of National Interest, Rebecca Miller, in the article“ Why should the West be ashamed of for Ukraine? "

She points out that the European Union should not have tried to extend its influence to Ukraine, that the European Union should have foreseen retaliation from Russia when it decided to draw Ukraine closer to Western Europe, and Putin was right in his “Crimean speech” when he said that Russia and Ukraine are closely connected and intertwined, Russians and Ukrainians are fraternal peoples, and the historical and cultural aspect of Crimea has always been closer to Russia.

“The National Interest” spreads the blame for the crisis on Western players: “The greatest disappointment in the EU’s decision to conclude a deal with Ukraine last fall is caused by the fact that Germany expressed gloomy premonitions about this agreement (although this premonition was not associated with the fear of provoking Russia), however, she did not even try to annul it. Obama didn’t have any concerns at all about this deal, while Poland and Lithuania actively supported it. ”

It is the influence of Poland and Lithuania that the monthly magazine calls the decisive factor that made the crisis due to the Association Agreement between Ukraine and the EU inevitable: “Many Western European countries have opposed and are opposing EU expansion. However, in order to satisfy the strong desire of Poland and Lithuania to embrace Ukraine, these countries succumbed to their persuasion. ”

“Actually, Poland and Lithuania should have shown concern about the signing of the agreement, given that Putin’s reaction will undoubtedly be acute. Maybe they hoped that if Russia showed aggressiveness, Germany and France would help them? Yes, keep your pocket wider. Or maybe they bet on the United States, that is, on NATO? Have the EU members ever thought about the possible consequences of their intervention in Ukraine? If yes, then maybe it just did not occur to them how powerful the reaction of Russia could be? ”, Writes“ The National interest ”.

It seems that the NATO allies begin the search in their ranks of the very “switchman”, who alone is to blame for everything, bears all the responsibility and in general is “extreme”. Infinitely blaming all blame on Russia and ousted President Yanukovych is impossible: someone must answer for the scam with the Association Agreement between Ukraine and the EU, and for the intrigue unleashed around the Vilnius Summit, and for shaping the effect of high expectations in Ukrainian society for all factors that ultimately caused a social explosion. And also for negotiations with Yanukovych, whom the previous two years the enlightened Europeans called the unsubstantiated felon, and three months after the Vilnius summit was called the illegitimate president. And for the fantastic humiliation of Europe, when all European leaders in Vilnius, until late at night, begged the “non-negotiable felon" to sign the Association Agreement, abandoning all of their demands on the leadership of Ukraine.

The most natural candidate for the role of such an “extreme” is Lithuanian President Dalia Grybauskaite. And not only because she was the hostess of the Vilnius Summit, was responsible for the Eastern Partnership program and kept in touch with President Yanukovych, but also because Lithuania’s position on the Ukrainian question was always the most extreme.

For all other countries from the West, the position was at least somewhat, but more flexible. The US Senate last year passed a resolution of the Illinois state senator Republican Richard Durbin demanding not to sign the Association and Free Trade Zone Agreement in Vilnius without the release of Yulia Tymoshenko. The Seimas of Lithuania rejected a similar resolution, and a deputy from the Social Democratic Party of Lithuania, Vyacheslav Simulik, in an interview with RuBaltic.ru commented on the resolution of American colleagues with the phrase: “I apologize: the United States is one player, the European Union is another player. And since the association of Ukraine is planned not with the United States, but with the European Union, I would like to hear the voice of the entire European Union ... So let the United States do not interfere in the disassembly between other states. ”

Polish Prime Minister Donald Tusk believes that Warsaw now occupies a strong position in Europe, since Poland has been conducting the past few years with respect to both Russia and Ukraine with regard to “rational politics, without any emotions”.

“I want to say with all certainty that Poland - as long as I enter the circle of decision makers - will not be a country implementing an aggressive anti-Russian concept,” said Donald Tusk a few days ago on the Polish TVN TVN 24.

The position on Ukraine of even the other two Baltic countries, which also belong to the “buffer zone” separating Russia and Europe, was more flexible.

Latvia preferred not to interfere in the intrigue around the association of Ukraine and the EU. Estonia may recall the conversation between Foreign Minister Urmas Paet and Catherine Ashton, in which he argued that the snipers on the Maidan were not Yanukovych, but the leaders of the Ukrainian opposition. “It is necessary that the principles of the rule of law be implemented, and the plots related to Tymoshenko, of course, are not included in the range that is needed for more serious integration with the European Union,” said the Chairman of the Foreign Affairs Committee of the Riigikogu Marko to RuBaltic.ru Michelson (by the way, representing the ultra-right and anti-Russian Union of the Fatherland and ResPublica in the Estonian parliament). The Lithuanian chairman of the Foreign Affairs Committee in Parliament, Benediktas Juodka, directly called on the European Parliament Chairman Martin Schulz to spit on European values ​​and sign the Agreement with Ukraine by all means.

Lithuanian diplomacy was as tough and uncompromising as possible. In fact, this is not diplomacy at all, but a set of provocations that can only destroy the architecture of European security. And this is increasingly being said in the West.

“I said to the President of Lithuania a few days ago: I understand that it is easier to talk about enemies, about your history and the like. Much harder to say: let's see how we can help in building relationships. Otherwise, no one will reckon with you, ”said Miguel-Angel Martinez-Martinez, Vice-President of the European Parliament at the end of last year. Well, this is a Spanish socialist, a leftist, whose views radically diverged from Grybauskaite and the conservatives in the time that has elapsed since the closure of the Vilnius Party School. “During Lithuania’s EU presidency, she was entrusted with the mission to successfully complete the negotiations on the Eastern Partnership with neighboring countries from the former Soviet bloc. But instead of a constructive and positive result, we now find ourselves embroiled in a deep diplomatic crisis between Russia and the EU, ”a Polish European Parliament deputy told European business review a month ago. Well, well, this Poland cannot forgive Grybauskaite treatment of the Poles of the Vilnius region. “Under the plywood of Lithuanian respectability there is a serious problem. At the center of this problem is the individual, sometimes referred to as the next head of the European Commission, Dalia Grybauskaite, ”said British MEP Graham Watson, commenting on the thesis of the“ success ”of the Lithuanian EU presidency. Yes, in the end, all this is just a private opinion of one MEP!

And now, about the responsibility of Lithuania for the Ukrainian crisis is written by the “mouthpiece of Washington” - the leading American publication in the field of international relations, which formulates and represents the position of the political class of the United States.

The Republic of Lithuania and personally Dalia Grybauskaite are getting closer to the official proclamation of provocateurs and outcasts of world politics. And Vilnius has nothing to oppose to this opinion, there is no way to stop the process there. Lithuanian diplomacy brought the country to a dead end: it turned out that it did not bend, but only breaks.