28 May 2014
22
To meet the challenges of security, highly qualified specialists are required.

- Nikolai Evgenievich, in December last year in an interview with our newspaper you said that the operational training activities regularly deal with the recruitment of internal troops with contract soldiers. In particular, it is known that recently an instructional gathering was held in Moscow with the sergeant staff of the Russian Interior Ministry troops. What is the reason for such close attention to this topic, what are the results of the work?

- The troops are currently solving extremely important tasks of ensuring security both at the international and at the domestic level. The main condition for their successful implementation is high professionalism and moral and psychological readiness of the personnel. Achieve the required performance is possible only in the process of long-term education and training. Therefore, we pin special hopes on the staffing of the internal troops of the Ministry of Internal Affairs of the Russian Federation mainly based on the contract method. By the end of 2015, we hope to have at least 80 thousands of military personnel serving under contract as soldiers and sergeants. Already today, more than 70 percent of these posts are staffed.

In the spring of 2013, legislation was amended to give commanders the right to independently accept candidates for service under the contract, bypassing the military commissariat. This not only had a positive effect on the time of admission, but also allowed managers to choose from several applicants on a competitive basis.

- Who is now connecting his life with military service? What are the quantitative and qualitative characteristics of military personnel serving under contract for non-commissioned and non-commissioned positions in the military?

- These are mainly young people of 23 – 30 years — both men and women. Most of them have a secondary vocational education, about 15 percent - graduates of higher educational institutions. About eight thousand have received additional education or are studying.

Over 35 thousands of soldiers and sergeants entered into a contract for a second, third time. Given that about half of them are married and raise children, we can conclude: people continue to serve consciously, feeling confident in the future. They know that they can keep their families at a decent level.

- As we see, the internal troops have done a great job in moving to a contract. What problems are revealed and how are you going to solve them?

- The first experiments on the recruitment of professionals were carried out since the mid 90-s. So we have experience in this business. We are well aware that staffing units is only half the solution of the problem. The main thing in this work is the organization of comprehensive training of selected military personnel, the arrangement of their life and life, the provision of all conditions for effective service and combat activities.

In order to determine the ways to solve these tasks, a training and methodological gathering with sergeants and foremen serving under contract was held at the main command of the internal troops from 22 to 24 in April.

- Could you tell us more about it?

- For the first time we conducted such an educational-methodical gathering at the scale of troops. It was attended by more than 250 sergeants and petty officers, including from the composition of the formed military units stationed in the Crimean Federal District. 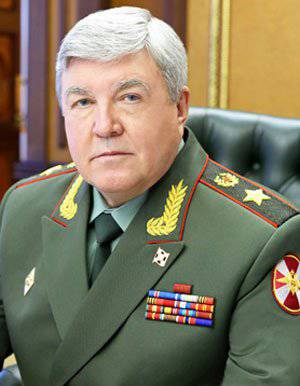 On the first day of the gathering, the participants were divided into groups depending on the military specialty. Together with the heads of departments of the main command of the troops, a round table was held in each group, at which officers and sergeants discussed issues of service and combat activities, peculiarities of money, housing, food and medical care, social protection, and talked about pressing problems.

The next day, the sergeants as part of their groups went to classes in the Special Operations Division, a training regiment located in Elektrostal, and a training center for the protection of important state-owned facilities in Lunevo near Moscow. The participants in the collection not only familiarized themselves with new approaches in the organization of combat training, daily and service-combat activities, but also saw new models of weapons, military and special equipment.

For example, for special forces and intelligence officers, their colleagues from the Separate Operational Division organized demonstration classes in high-altitude and special tactical training, presented modern unmanned aerial vehicles, sights and engineering reconnaissance equipment, and also shared experience in conducting training in firing training. And at the end of the lesson, each sergeant had the opportunity to go to the firing line and, in practice, work out the material presented by the instructor.

The scientific-practical conference on the subject of “Recruiting military posts of units of internal troops with contract servicemen and passing military service by them” became the logical conclusion of the training-methodical collection with the non-commissioned officers. Problems and solutions. ”

Colonel General Sergei Bunin, Chief of the General Staff of the Interior Forces of the Ministry of Internal Affairs of Russia, made a report on the results of manning under the contract and the prospects for career growth of military personnel. He noted that the increase in the level of combat training of a contract sergeant is directly connected with the ability of military units to perform service and combat missions for their intended purpose. In turn, his professional growth is matched with the dynamics of the socio-economic situation. On average, in the predicted conditions, it is expected to form a high-class specialist within six years, the cash content of which will be more than doubled during this time. At the same time, he will be able to get permanent housing through the military mortgage system.

On the problems of strengthening the rule of law and law and order in the internal troops of the Ministry of Internal Affairs of Russia, the Chief of the Chief Military Prosecutor’s Office, Major General of Justice Alexander Nikitin, spoke on the issue. At the conference, speeches were made by other officials of the main command of the internal troops, as well as sergeants and petty officers. We proceeded from the fact that everyone can express their opinions, share experiences. This made it possible to look at pressing problems not only through the eyes of the command, but also from the position of rank-and-file soldiers and sergeants. We talked about the consolidation of contractors, service load, housing.

When discussing the question of monetary allowances, an example was considered of the private soldier who arrived to undergo military service under the contract. His initial salary is 18 750 rubles. Already by the end of the first year of service, subject to the successful development of the military specialty, he can be recommended for appointment to the post of section commander with the rank of "Junior Sergeant" and be given the opportunity to pass the qualification test "Class III Specialist". In this case, his salary will be increased by about one and a half times. By the end of the third year of service, becoming a class II specialist, a person will start earning more than 32 thousands. In addition, will receive the right to study at the university. Upon completion of the sixth year of service, having the title of senior sergeant and being a specialist of class I, the contractor will be able to receive almost 40 thousand rubles.

And this is not the limit. After nine years, he can get a class qualification "Master", will increase the premium for long service and, accordingly, cash. And if he has an appropriate education, he may be appointed to military posts replaced by officers and warrant officers.

Thus, during this time, a high-class specialist will grow up in the army, the cash content of which will more than double, besides having his own housing.

In the speeches of sergeants at the scientific-practical conference were raised questions of their getting higher education, both civilian and military. We explained that today there is such an opportunity. To obtain higher military education by contract soldiers, whose age exceeds 23 of the year, this year the faculty of correspondence education was opened on the basis of the Saratov military institute of internal troops of the Ministry of Internal Affairs of Russia.

- You mentioned housing. Today it is especially relevant. Often, military units do not have enough service housing, and the funds paid for renting apartments are below market in many regions. Did this problem come up at the assembly?

- Practically in each group this question was touched. In recent years, the housing stock of the troops has increased significantly, but, unfortunately, we cannot yet give each a service apartment.

Only a soldier or a sergeant who has entered into a second contract for service can become a member of the accumulative mortgage system. The High Command proposed to amend the current legislation so that this right appeared already during the period of the first contract. Another bill proposes to allow maternity capital to be added to military mortgage funds.

It should be noted that now the substitution for the purchase of housing or construction comes to replace the military mortgage. According to preliminary forecasts, the size of a one-time social benefit will be sufficient to purchase an apartment or house in almost all regions.

Agree, in 25 years to have a normal income and own housing - a weighty argument in favor of the service contract.

- Of course. But a reliable rear for a fighter is not only his own apartment. You mentioned that half of the contract military personnel from among sergeants and privates are family people. Is it planned to introduce additional benefits for wives and children of this category of military personnel?

“Today, only families of officers and warrant officers are serviced at departmental clinics and hospitals. Now the issue of introducing amendments to the federal law “On the status of military personnel”, which will allow family members of professional soldiers and sergeants to receive medical assistance there, is being worked out.

I want to draw attention to another planned innovation. Many units of internal troops are located in the so-called privileged areas. This is the North Caucasus, the Far East, the Far North. The legislation establishes the terms of continuous service in these territories, after which the military should be transferred to other regions. In the near future, planned replacement will fully extend to this category of military personnel.

- Judging by what you said, a powerful sergeant corps is really being created in the internal troops. Will junior commanders have any additional rights?

- At the educational-methodical assembly and the conference they spoke about such an organization as the council of sergeants of a military unit. According to the participants, often these bodies either do not exist or function only on paper, since their influence is insignificant. Therefore, it was suggested that the sergeants board be given additional authority. Thus, the council may receive the right to petition the commander to apply such serious disciplinary sanctions to servicemen as a reduction in military position or dismissal from service. Decisions made at the sergeants' council will be taken into account at the meetings of the attestation commissions when sending military personnel to universities and advancing to higher positions. In our opinion, this will positively affect the moral climate in the units.

- How do you assess the results of the collection?

- Addressing the participants at the beginning of the event, we asked them to speak not only about successes, but also about difficulties. And we really got a constructive dialogue. We plan to make such charges regular and to carry out not only at the level of the main command, but also in regional formations.

Ctrl Enter
Noticed oshЫbku Highlight text and press. Ctrl + Enter
We are
Commentary on A. Petrov's interview “Fire and Tactics in the Russian Army: Another Look”Glavcom VV: Internal troops will be professional
Military Reviewin Yandex News
Military Reviewin Google News
22 comments
Information
Dear reader, to leave comments on the publication, you must sign in.