Taliban in Nigerian. As the richest country in Africa comes to civil war 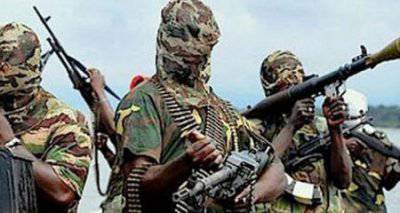 A few months ago, trying to identify the most dangerous in terms of terrorist manifestations areas of the globe, we talked about Nigeria as well. Recent events show that our prediction was correct.


20 May in the city of Jos with small intervals thundered two powerful explosions. First, a mined truck flew into the air. After 20 minutes, the rescuers were already working at the scene of the tragedy, a second explosion rang out - in a parked minibus. The number of victims of the double terrorist attack exceeded 200 people. On May 13, a rural self-defense detachment repulsed an attack by militants from the Boko Haram group on a village in the province of Borno in the north of the country. During the battle, according to eyewitnesses, about 200 militants were killed. Ten days earlier, members of Boko Haram, who had attacked the village market, had shot 300 locals. And about a month ago, militants from the same group kidnapped more than 200 schoolgirls and are now threatening to sell them into slavery.

Until recently, the world media did not really pay much attention to their attention: “Boko Haram, judging by everything, believing that Africa is far away and the events in some kind of Nigeria cannot interest consumers News from Europe and America. However, the scale of the latest Boko Haram actions is such that it is simply impossible to ignore them. It is no coincidence that the UN Security Council recently recognized this organization as terrorist.

14 May Assistant to the President of the United States for National Security Susan Rice said that a group of military advisers, as well as intelligence officers and security experts, would be sent to Nigeria. At the same time, the Americans are not planning a military operation in the north of Nigeria. But this is only for now.

Boko Haram is a radical Nigerian group. The first mentions of it refer to the 2002 year, when militants, or rather, street gangs strayed into street gangs, began to attack Christian churches, police stations and government buildings. At that time they were armed mainly with improvised means - sticks and fittings. Small weapon, explosives, as well as specialists in explosives appeared with them only later.

Boko Haram aims to introduce Sharia law throughout Nigeria and abandon the Western way of life and education. Hence the colloquial name of the group, which translates from Hausa as “Western education is prohibited”. For the more advanced, there is an Arabic name: Jama'atu Ahlis Sunna Lidda'awati wal-Jihad (“Society for the Prophets of Prophet and Jihad Propagation”).

In 2011, representatives of Boko Haram declared that their goal was to establish Sharia not everywhere in Nigeria, but only in the north of the country populated mainly by Muslims, where Sharia laws are present, but they are not the main source of law. Anyway, since 2002, at the hands of the representatives of the “Nigerian Taliban”, as they also called “Boko Haram”, more than 10 thousand people died.

Two points are noteworthy. First, “Boko Haram”, until recently, avoided attacking protected government or military installations, preferring to terrorize civilians. And, secondly, the militants still limit the geography of their attacks to the northern and northeastern regions of the country. The 2012 campaign of the year in Lagos and the attack on the base of the Nigerian Air Force in December of the 2013 year were rather an exception to this rule.

Since 2013, Boko Haram has been actively using suicide bombers, which was not there before. The Nigerian government, in response, is making efforts to destroy the group, but the cheerful reports of the military seem to have little to do with reality. For example, last fall, there were reports of the elimination of the leader of Boko Haram Abubakar Shekau. Then it turned out that Shekau is alive and well, at least in the video he shot this spring, he demands, in exchange for the release of the kidnapped girls, to release the members of the group from prison.

However, even if Shekau were destroyed, the loss of the leader would have a minimal effect on the activities of Boko Haram. Most likely, the new leader would have been found very quickly, since a lot indicates that Boko Haram is not so much a fanatical ideologically charged grouping, as an ordinary political tool.

As already mentioned, "However," Boko Haram is based in northern Nigeria - that is, where there is no oil. The poor north is of secondary importance for the country's budget, and therefore it can be assumed that Boko Haram is the only argument that local politicians can use in their difficult dialogue with the central government.

They also want to participate in the section of the hydrocarbon pie, to which at the moment only approximations of the current president-southerner are admitted. And there is something to share: according to estimates by British Petroleum, gas reserves in Nigeria amount to 5 trillion cubic meters (for comparison, Russian reserves are about 47 trillion). Today, Nigeria is ranked seventh in the world in gas reserves, and it is believed that in the near future it may well enter the top three. As for oil, its proven reserves in the country are about 35,5 billion barrels (about 4,8 billion tons).

In 2015, the presidential election will be held in Nigeria, and the current president Goodluck Jonathan will most likely want to be re-elected for a second term. And that means breaking the unwritten law, according to which Jonathan (a native of the Niger Delta region) must give way to a northerly president.

So far, "Boko Haram" held its shares only in Nigeria. And despite all kinds of speculation, there is not yet serious information indicating the group’s links with international terrorism. Which, however, does not mean anything.

In Nigeria, the interests of foreign countries are widely represented, whose citizens can become targets of militants - and not necessarily from Boko Haram. Recently, various mass media have repeatedly mentioned the activity of Iranian special services, which allegedly are interested in the objects of the USA and Israel in Africa. The basis for such allegations was the fact that three Lebanese citizens suspected of belonging to Hezbollah were arrested in the city of Kano in northern Nigeria. Anti-tank mines, small arms and explosives were found in the house of one of them (the entire arsenal was stored in a concrete bunker equipped in the basement).

Contacts Nigeria and Israel are not limited to military cooperation (the purchase of UAVs and other equipment). Countries actively cooperate in agriculture and other areas. Earlier this year, during Goodluck Jonathan’s visit to Jerusalem, a number of important intergovernmental agreements were signed, including the opening of direct flights.

For the United States, OPEC-affiliated Nigeria is the fourth largest supplier of crude oil, and therefore the situation in this African country cannot remain out of sight of the Americans.

Nigerian hydrocarbon fields are being developed by large companies such as Mobil, Total, Statoil, British Petroleum. They have to be very difficult. Indeed, corruption is flourishing in the country, and numerous terrorists with separatists continually threaten foreigners. Compared to the constant risk to life, such a trifle as 10% of the loss of oil produced, which is stolen directly from oil pipelines, seems to be quite insignificant.

As for Russia, the trade between our country and Nigeria is still a little more than 300 million dollars. And the threats that foreign business faces in this state practically do not concern us. However, if Russia wants to return to Africa, it is impossible to do this bypassing the richest, though also problematic, Nigeria.

Although the situation in the country will only worsen. We should expect new outbreaks of violence related to the upcoming presidential elections and the almost inevitable foreign military intervention.

Ctrl Enter
Noticed oshЫbku Highlight text and press. Ctrl + Enter
We are
A side child of capitalism. The phenomenon of "Boko Haram"
Military Reviewin Yandex News
Military Reviewin Google News
10 comments
Information
Dear reader, to leave comments on the publication, you must sign in.