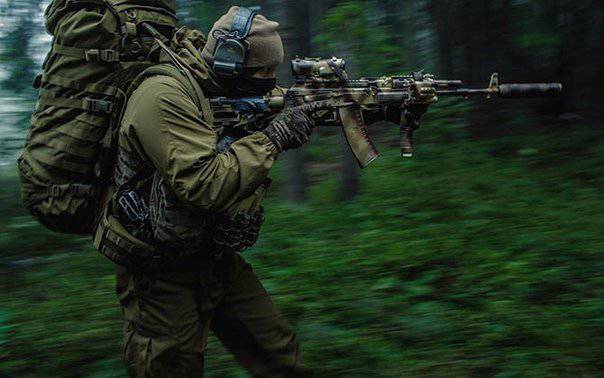 Interesting material on the topic of practical advice for those who do not have the proper skills, was going to go to war in the Donbass.

Tips for those civilians who decide to go to war:

The following advice comes from a former employee of the GRU, hiding under the nickname Raccoon. Unfortunately, all contacts with him are lost. The scenario is similar - civil war or war.

Further I will tell about some specific features on a DB. How to behave if you have seen enough of patriotic films and decided to “die by the graves of grandfathers.” So that this does not turn into a “virtual club of thugs” - I will tell some specific trivia with theses.

The fact that you are in an extreme apartment does not mean that you cannot enter through the wall from the next one.
- On the window you can hang nets from the old Soviet beds. They stop VOGI well.
- You can hear meowing, for example, because of a door of a closet. I'm sorry, but the animal is doomed. Most likely, he was locked there with a grenade. Can not open. This is a very difficult moment, always, in such difficult situations I want to be a man, but ...
- If you need to shoot from the room on the street, then do not crawl to the window sill or stand at the side of the window. Go deep into the room, stand on a stool, closing the wall or the like. And do not turn on the light, you can not, do not highlight yourself (I'm not talking about WU).
- Splinters of brick or concrete, broken by fire, have properties to fly on you. When you hit your eyes ... well, you understand.
- From a grenade launcher to shoot at people is useless. Although now, it seems, they began to make high-explosive fragmentation shells, but, IMHO, this is heresy.
- It’s a bad idea to shoot for a long time without changing position.
- Bend down.
- No need to "calculate snipers." Not your job, and you do not have enough knowledge. Fight further, "not paying" attention.
- Be prepared, morally, to “work out” the civilians who lit up you. Including women and children. If the prospect is not happy, then move carefully.
- At AK – 74 (a copy with good accuracy of the battle), you can fasten the sighting of the SOB from the SVD. At distances 500 – 600, the AK – 74 and the SVD are very closely connected with the trajectory, the sight will fit perfectly. You will shoot and carry fire, because of the caliber, much faster than with the SVD. And those who decide to look for a sniper, you will be uninteresting.
- It is NOT IMPORTANT to shoot from a grenade launcher. He has a platoon time. He needs to fly 15 – 25 meters before the grenade is cocked. Accordingly, in the room, it just does not work.
- Modern RGO and RGN grenades explode FIRST from the impact. They have a shock fuse worth it. and the explosion through the gap - it works self-destruct (in case the grenade fell into the loose snow)
- No one, even the sappers, are not engaged in the removal of mines and slaves. They stupidly undermine their TNT saber. Do not be clever and begin to shoot VU.
- Stretching, normal warriors, put secrets so that it would not be removed in a simple way. So “cutting the thread” is a bad idea. Just pass by. This is not your business, for this there are senior comrades. I will not teach you how to do WU and stretching. I think you understand that this is an article right away. Learn the first medical aid.
- When injuries are venous and arterial bleeding. They are “treated” in different ways. But another thing is important. In the heat of battle there is no time. With venous bleeding, a friend will die for several hours, and with an arterial 10-20 seconds, and then loss of consciousness and hypoxia begins. So, in order not to bathe, you quickly apply an arterial guzzle over the wound (now the interns will begin to resent, but this is life, this is not a citizen, you have to break it) and return to battle. Your friend will have half an hour or an hour to figure out himself, or you will do it when you are free.
- Harness is always at hand! Neither in a bag, nor in a backpack - or wound on a butt, or in unloading near at hand.
“Always TWO harnesses with you!” One you can give to the wounded comrade and in a minute get a bullet in the femoral artery.
- There is such a thing as "suppression by fire." Actively watering the enemy, often, you can pin down his actions, even without falling and not causing damage to manpower. Especially help you tracer.
- Remember the tracer, besides the fact that the trunk is very much impacted, they also give out your position. So do not abuse them. And it is difficult to carry out aimed fire.
- Weapons need to be cleaned every day. Especially gentle around the muzzle brake. If there is a groove or fossa, then the accuracy of the battle will fall dramatically.
- The last three patrons in the store, it is better to score tracer. To empty the store did not come as a surprise to you. Moreover, if you leave one cartridge in the barrel, then you will only need to whip up a new store, that is, the recharge rate will increase.
- Watch your feet, do not be lazy to wash them. Nate and you are no longer a warrior. - If you see that you can shoot at someone, this is not a reason to shoot. If you have not noticed, ask the commander whether you can get involved in a fight.
- If you notice someone, but you have not yet seen, do not jump sharply to the side. Peripheral vision will give you away instantly. Gently and smoothly, take your time, sit down and calmly take a stand. It will be much less noticeable.
- Remember, the sending cartridge cartridge must be released abruptly to clang. Otherwise, "zhevyuet."

FOR WAR! Not for camping! Designation system: items marked with an asterisk are items whose purchase is NOT paramount. I write things for different seasons mixed up (but this does not mean that all this needs to be put into one backpack), it’s not necessary to drag everything out of failure, of course. You should have everything in your home. So that you can change equipment yourself for different tasks. Immediately make a reservation, I'm not a fan of "Slides". I prefer a good dense field uniform and on top of the camouflage, so that the "Gorky" in the list will not be.
.
Rags:
1. Bertsy. Conditions for choosing two: to not miss the water, and weight. Choose the easiest.
2. MINIMUM five pairs of socks (including winter ones).
3. Tight pants
4. Thermal underwear
5. Several t-shirts, only cotton
6. Tight field jacket
7. Belt
8. Maskhalat (both summer and winter)
9. Fleece jacket (instead of a sweater, it is lighter, weight is very important)
10. Winter jacket and winter pants
11. Winter boots (I advise "Husky with. 080" - cheap and cheerful)
12. Winter hat (knitted, do not have earflaps to drag, it is heavy)
13. Cap or Panama, for the summer. Better panama from tarpaulin, that would even slightly kept moisture. In the alloy there is such an inexpensive one.
14. Winter scarf
15. "Arafatka"
16. Gloves or mittens for winter
.
Equipment and equipment:
1. Backpack raid on 60 liters
2. Assault Backpack on 25 liters *
3. Five points *
4. Sleeping bag
5. Knee pads
6. Canvas Cloak
7. Folding mat
8. Unloading *
9. Body armor
10. NVG *
11. Active Headphones *
12. Ballistic glasses *
13. Broneshlom, or, in the worst case, a helmet
14. Jar or hydrator
15. Small infantry shovel
16. Landing Rope 50 *
17. Kettle with popkotelnik
18. Gas-burner
19. Carbine
20. Compass
21. Paracord 20 meters
22. Fork spoon
23. Makeup
24. Mirror
25. A set of threads and needles
26. Matches
27. Gun cleaning kit
28. Gun oil
29. Talc
30. Shooting gloves
31. Insulating tape
32. Heat sources
33. Lamp
34. Tactical Weapon Belt *
35. Knife
36. Clock watch
37. Pencil
38. Paper
39. Army radio *
40. Poncho
41. Insect repellent (non-smelly)
42. Binoculars *
43. Range finder *
44. Multitul *
.
In medicine:
Take what you personally need, for your personal sores. Plus: 3 arterial tourniquet, 2 – 3 IPP, a lot of bandages, scissors, suture material, pain medication (tablets, if you have sore teeth, for example), disinfectant. You also need promidol and some HARD antibiotics (but you can hardly buy them at a pharmacy without a prescription).
.
The activated carbon will not be superfluous, but under the loads the stomach, sometimes, begins to deal with this nonsense. I also advise you to collect a set in ampoules of ketanova, dexamethasone and kordiamina. Well, a syringe for them, of course. This is an anti-shock kit. It will not allow your heart to get up due to the fact that the brain collapses your pressure from pain or blood loss (and as a rule they are somewhere near).

http://sakstorp.livejournal.com/67453.html - Background rebel (specialized literature on the guerrilla war - you can download).

Ps. Regarding how to get to the front, then again:

You can join the people's militia of the DPR and the LPR:

http://voicesevas.ru/news/yugo-vostok/vnimanie-telefony-dlja-zapisi-v-narodnoe.html - on the link in the availability of phones to write to the people's militia DNI.

You will be interviewed on the spot and will determine what you are fit for according to your military, technical or hunting skills. As it is not difficult to guess, in modern war not only those who run on Zelenka with Kalash are needed, therefore at certain moments a competent staff officer or a cool armored vehicle driver may be more useful than a few green recruits with freshly issued AK-74.

Regarding how to join the militia, not being on the territory of Ukraine, then for this you obviously have to cross the Russian border with the DPR, which is of course illegal (from the point of view of the fascist junta), but it is quite possible, as evidenced by the practice of passing militias from Ossetia, Kuban or Tatarstan on the territory of the DNI. The authorities of the Russian Federation do not condone this (if there is a lot of evidence when their border guards and FSB officers interfered with volunteers), but sometimes they look at all this movement through their fingers. The same applies to the transportation of firearms with ammunition. People with weapons and equipment are driving through, so with the proper desire, it will work out for you if you decide to beat the fascists with weapons in your hands.

Ctrl Enter
Noticed oshЫbku Highlight text and press. Ctrl + Enter
We are
What you didn't want to know about EnglandSaratov club "Patriot": not to be afraid of the enemy and love the Motherland
Military Reviewin Yandex News
Military Reviewin Google News
62 comments
Information
Dear reader, to leave comments on the publication, you must sign in.