3 Why give the ships 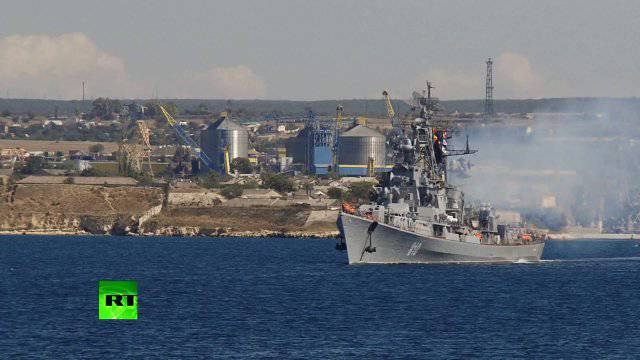 The other day, to the accompaniment of cannonade in Slavyansk and Kramatorsk, where the regular troops and the National Guard of Ukraine force weapons pacify recalcitrant locals, RIA "News"referring to the Russian Defense Ministry reported that five more warships captured in March by Russian special forces were transferred to Ukraine from the Crimea. The agency also added that in accordance with earlier agreements reached between the military departments of the two countries, it is planned to hand over to Ukraine everything left in Crimea military property.

It is all the more strange to read this because a month ago the Russian Defense Ministry had already suspended the transfer of armored vehicles to Ukraine: the Russian military learned that Kiev was throwing it straight to the Donbass. Suddenly, right? This is reminiscent of a bearded anecdote about Indians: "On the third day, the sharp-eyed Falcon found that the prison lacked one wall." Was it really difficult for officials to make decisions about the transfer of equipment to Kiev that Kiev can use it for its intended purpose?

Recall that at the time of the transition of Crimea to the Russian Federation, the peninsula was the most militarized region of Ukraine. About 200 military units were located there, where more than eighteen thousand troops served. The main striking power was a separate artillery group in Simferopol, the 36th mechanized brigade in Perevalnoye (Tanks T-64, armored personnel carriers, infantry fighting vehicles), two S-300PS anti-aircraft missile regiments, Buk-M1 anti-aircraft missile regiment in Yevpatoriya, several battalions of marines in Kerch and Feodosiya with armored vehicles, anti-aircraft and anti-tank weapons, anti-ship missile complexes, self-propelled and towed howitzers of large caliber, multiple launch rocket systems, air defense brigades, reconnaissance centers and weapons depots. At the airfields there were several Mig-29s and other combat aircraft.

Even if we take into account decommissioned and inefficient units, as well as those that the Russian Federation does not transfer to Ukraine (probably there are such, although not yet known) this is a rather impressive list. It is known, for example, about plans to transfer the 28 ships to Ukraine, which, we recall, at first, Russian special forces were taking at risk to life. Meanwhile, it is obvious that Ukraine today is a hostile state for Russia. The question is the same: why should Moscow arm it?

In March-April, when everything was just beginning in the Crimea, the Russian military leaders openly said that the ships of the Ukrainian Navy would join the combat staff of the Russian Black Sea Fleet. The former commanders of the Black Sea Fleet, admirals Komoyedov (now a State Duma deputy) and Kasatonov, also spoke about this. But then something changed. What?

Sources of Rosbalt on the Black Sea navy they just shrug: "We don’t know the reasons and have nothing to do with the transfer. Decisions are made by Muscovites, whom we don’t know. We don’t even know which department they represent."

Since the newest история The Black Sea Fleet of Russia knows a lot of nonsense and betrayals, and all of them, for the last 23 of the year, usually came from Moscow, the Black Sea Fleet has developed a practice: ambiguous decisions are made by retired officials. Therefore, the site "Navigator" interviewed on the subject of the transfer of ships of several naval ex-military leaders.

“It is unlikely that Ukraine will use the equipment, which is now being withdrawn from the Crimea and Sevastopol, against the Russian Federation,” said Rear Admiral Vladimir Solovyov. “In fact, these ships are rather old and decrepit, they have no value. To be honest, they just littered the bay. "

The scientific secretary of the military-scientific society of the Black Sea Fleet, Sergei Gorbachev, believes that "the transfer of ships has political significance and directly concerns relations between states. Regardless of what is happening now on the territory of Ukraine, the Russian Federation is obliged to comply with the agreements. Cooperation is better than confrontation. Any confrontation is counterproductive. Despite the events in Donetsk and Lugansk, Ukraine and Russia are not in a state of open conflict, but still in a state of relations. Before Acha warships Navy - a way to establish interaction, reduce the "intensity of passions."

“I think that Russia will not in the future prevent the withdrawal of Ukrainian ships from the bays of the Crimea,” says Rear Admiral Alexander Kovshar. “The Russian Federation shows that it does not need anything else, that the great state fully fulfills its promises. Can Ukraine use Theoretically, yes, practically no, this technique is against Russia. In general, I don’t think that the military potential of Ukraine will allow it to even think about conducting military operations against the Russian Federation. The fleet will receive ships of the new generation. So we have nothing to fear! "

In the same vein, the second rank captain Yevgeny Dubovik, who recently headed the Fair Russia faction in the Sevastopol law meeting, argues: “In my opinion, it’s absolutely correct that the ships are handed over to their rightful owners,” he says. “This is a gesture of goodwill. Russia above such petty property squabbles. Especially since the Russian Federation does not need these ships. In general, I want to say that the fascist regime in Ukraine will not last long. We must not forget that we are fraternal peoples. "

It is easy to see that the fleet experts are moving away from analyzing the causes and trying to justify an ambiguous decision. Meanwhile, all the respondents cite, in fact, only two arguments: the decrepitude of the ships of the Ukrainian Navy and the “goodwill gesture” from Moscow. Consider them in more detail.

As for the "scrap metal". We will not give here a detailed ship structure of the Russian Black Sea Fleet - it is available in open sources. We can only say that his youngest ship was launched in the 1991 year, and the majority were built in the 60-70s of the last century. Yes, Russia has more ships, but their average age is not younger, but older than Ukrainian ones. Therefore, there is no reason for indulgent arrogance, to put it mildly. Yes, officials and propagandists are trumpeting that a whole armada of new corvettes and submarines will come to the Black Sea Fleet. But let them come first.

Goodwill is still stranger. The fact is that Russia, having annexed the Crimea, declared at all levels: all state property of Ukraine in the Crimea is nationalized. And at the moment it has already happened. Kiev does not like nationalization: they estimated the damage at $ 100 billion. So why not return the ports, railways, drilling platforms and pipelines of Chernomorneftegaz, two power stations, trade union resorts, and Massandra at last to the "legitimate Ukrainian owners"?

And, by the way, to whom in Ukraine do you demonstrate this “good will”? Turchinov and Yatsenyuk, whom you do not recognize as a legitimate authority and call "US puppet"? Did the Ukrainian military, whom you expelled from the units and from the ships, were arrested and deported from the Crimea, and then not allowed into the Crimea? Thus, politicians and the military, that all these years have drifted to NATO and are now preparing for war with Russia, shooting their own citizens in the Donbas who don’t like all this?

In general, there are more questions than answers. And it should be noted that so far no Russian media have been asked by them. Perhaps only the AST Center expert Andrei Frolov, who was approached by Rosbalt for clarification, introduced a bit of rationality into possible Kremlin motives. He suggested that most of the ships returned to Ukraine are auxiliary vessels, the state of which requires burdensome repairs. It is also possible that the transferred military equipment is devoid of a number of important nodes, the expert says. In addition, it’s not a fact that, together with the ships, Russia transfers weapons to them: Ukraine held the majority of the sea arsenals in the Crimea, but what their fate is now is unclear.

However, “unclear” remains the key word in this story.