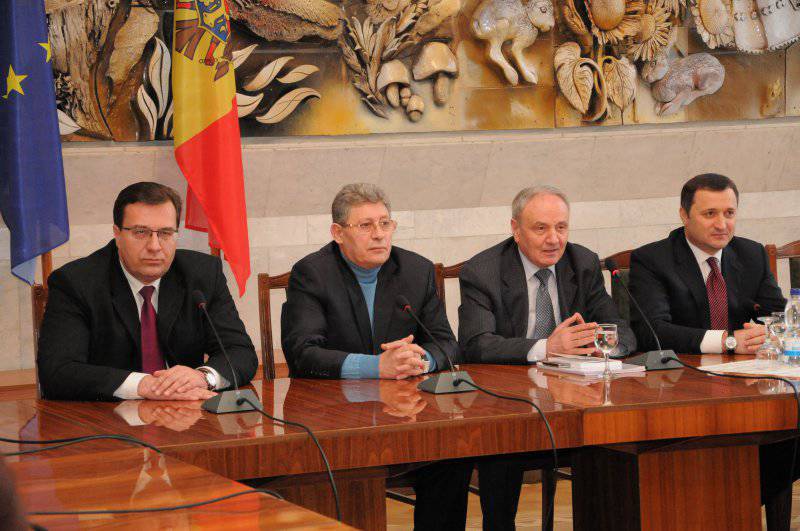 All the new countries of Eastern Europe are gradually being drawn into the big game between the USA and Russia. Back in November, the crisis concerned only Ukraine, but already now Belarus, Poland, Romania, and the Baltic countries clearly expressed their attitude to what is happening. The queue has reached Moldova, for which Ukraine is the closest neighbor and an important partner. Chisinau faces an important choice: to follow in the footsteps of the Kiev government, which betrayed its people, or to abandon the movement along the western vector in favor of friendship with Russia. As in Ukraine, the inhabitants of the republic were divided on this issue.

Is it worth it for the sake of friendship with the EU to divide the country?

Contrary to the myths, in Moldova they are friendly to Russian culture and in general to all Russian. The nationalists ’sabbath in the 90s was suppressed: the radicals who carried out the war in Transnistria were ceded to the Communists, who ruled the republic for almost 10 years. In 2009, power was overthrown, and the Communist Party replaced the so-called Alliance for European Integration - a chimeric alliance of democratic, liberal, and liberal-democratic parties. But the members of the Alliance are constantly at enmity with the opposition, then with each other, and therefore Moldova moves towards Europe with the speed of continental drift - that is, at this rate of rapprochement with Brussels, Chisinau will never even become a partner of the European Union, not to mention full membership in this organizations.

Moldova has difficulties and with the preservation of territorial integrity. The republican authorities do not fully control the left bank of the Dniester, with the exception of a few villages in the Dubossary district, and the city of Bendery on the right bank. In the south of the country is located the autonomous Gagauzia, which has the right to proclaim independence in case Moldova loses its sovereignty. Integration into the EU just provides for a partial transfer of national sovereignty to the allied bodies - which means that if Chisinau gets too close to Brussels, little Gagauzia will be able to turn into an independent state.

By the way, 2 in February of this year in Gagauzia a referendum was held on the attitude of the residents of the autonomy to the European and Customs unions. The overwhelming majority of respondents - 98% - spoke in favor of the latter.

The alignment of forces in Moldova

In other parts of Moldova, directly managed from Chisinau, the situation is the same. 200 thousands of Moldovans make a living in Russia, and are not going to give up the Russian labor market that is so attractive to them. Each of them feeds a family of 4-5 people, so we can assume that, at a minimum, 1 has a million Moldovan citizens who fully support Russia. Add to this the 280 of thousands of Ukrainians, the 200 of thousands of Russians, the 160 of thousands of Gagauz - and the picture will be overwhelming: almost half of the population of the republic strongly opposes the country's integration into the European Union!

Of course, these figures are excluding Transnistria, which made its choice back in 1992 year.

However, the majority of Moldovans still relate to their future with indifference: the endless bickering between members of the Alliance for European Integration has scared many citizens of politics, who believe that nothing can be changed by voting. The case with the referendum on constitutional amendments organized in 2010 was indicative: only 29% of voters took part in it, so the vote had to be declared invalid. This indicates a deep apathy in public life, a disappointment with the current political elite.

As for supporters of European integration, they are in a clear minority. Rallies in support of the European Union are usually held with the participation of Romanian students who are brought to Chisinau and Balti for extras. The government also attracts administrative resources, forcing teachers, doctors and other “state employees” to hold a rally in danger of dismissal in support of the government and the European Union.

Despite the negative trends in politics, in recent years, civil activity of the population in the republic has been growing. Resistance to the European integration course of the government became especially noticeable after November last year, when another Maidan gathered in neighboring Ukraine. The opinion of the European Union in Moldova changed for the worse as the mood of the Ukrainian protesters became more radical. When the Molotov cocktails flew into the Berkut, the Moldovans realized the perniciousness and futility of the foreign policy pursued by the ruling Alliance for European Integration.

A particularly strong opposition to the Alliance was in Gagauzia, which has close economic ties with Russia and supports the Communist Party. 2 in February in the autonomy even held a referendum on the issue of international self-determination of Gagauzia, where the absolute majority of the inhabitants of the autonomy called for the strengthening of trade and economic ties with Russia and the Customs Union.

In Chisinau, meanwhile, in the fall, rallies are held demanding an end to rapprochement with the European Union. The demonstrators are initiated by the opposition Communist Party of the Republic of Moldova, headed by former President Vladimir Voronin. Unlike pro-government rallies, the Communists do not use administrative methods to gather people, do not bribe and blackmail their voters, but their rallies always attract tens of thousands of people who are not indifferent to the future of their homeland.

The Alliance is afraid of growing protest sentiments, and in every way hinders opposition activities. Last year, an agreement was concluded between Moldova and Romania, according to which the police forces of the western neighbor can operate freely on Moldovan territory at the invitation of Chisinau. This means that the country's government is seriously considering the threat of a popular uprising, and is preparing to put down any riots in advance.

Romanian special forces can also be used to fight Transnistria: formally, its territory belongs to Moldova, although it is not controlled by it. If we interpret the contract from the point of view of Chisinau, reinforcements from Romania have the right to act in Transnistrian cities.

Also, the support of Bucharest is needed by the Moldovan government to suppress secessionist sentiments in the south of the republic - in Gagauzia. The February referendum and the statements of the Gagauz political leaders showed that in autonomy they are ready for any variant of the development of events. In Comrat, the capital of Gagauzia, they seriously say that it is necessary to form the people's militia, because all the power structures in the autonomy are subject to Chisinau.

So, June 27 is expected to sign an association agreement with the European Union by the Moldovan government. Obviously, this event will lead to a serious destabilization in Moldova, and will have far-reaching consequences, including the overthrow of the Alliance or the secession of some regions of the republic.

Moldova will make a choice in the fall

By the way, the words about the overthrow of the Alliance - not a dummy. In the fall of this year, the residents of Moldova will have a unique chance to throw the liberals and democrats out of parliament without the use of force. On November 30, parliamentary elections will be held in the country, in which, apart from the Alliance parties, the Communists will take part - the only opposition force that can really resist European integrators and unionists. The Communist Party will get a sufficient number of votes and will get the majority of mandates if it is supported by the Russian, Ukrainian, Bulgarian and Gagauz communities, as well as by those Moldovans who pin hopes for the future only with Russia.

Having strengthened themselves in the parliament, the communists can launch an offensive against the president: according to the law, he is chosen not by the people, but by the deputies.

At the same time, the citizens of Moldova are unlikely to regret the deputies of the alliance: they, in fact, were appointees of Romania and the European Union, since almost all of them have Romanian citizenship. No country in the world allows foreigners to rule it, and only Moldova after the 2009 coup of the year was an exception.

Thus, between June and November in Chisinau there will be a not weak struggle between the ruling Alliance and the opposition represented by the Communist Party. Of course, Vladimir Voronin will take advantage of the signing of an agreement between Moldova and the European Union in order to increase the pressure on the Liberal Democrats during the election campaign. Having enlisted the support of voters who are ready, among other things, to take to the streets of cities, in case of successful development of events, the Communist Party will be able to take revenge without blood and violence.

However, if the Alliance chooses a radical option, and tries to falsify the elections, the political opposition will not be limited to Chisinau. There will be an aggravation of the situation in Gagauzia and in those areas where the positions of the communists are traditionally strong. To protect its interests in Moldova, Russia needs to support the Moldovan opposition and do everything possible so that the conflict is resolved through diplomacy. It is also critically important to prevent foreign interference, otherwise Moldova will share the unenviable fate of neighboring Ukraine.