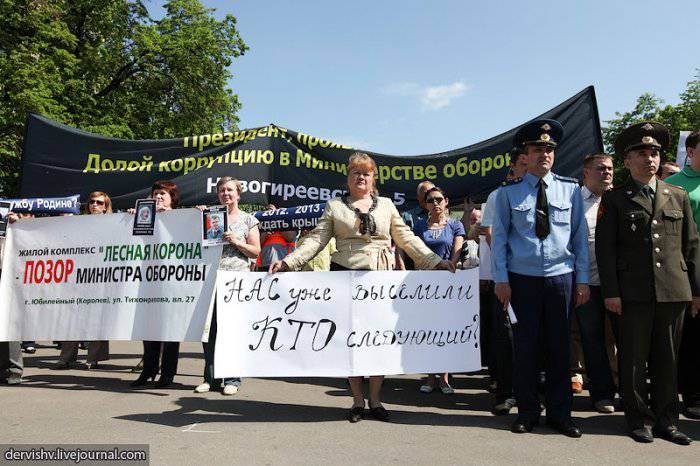 According to media reports, the long-awaited relocation of servicemen and their families to the new houses of the Snegovaya Pad microdistrict in Vladivostok was to begin on May 25. Like it was allocated more than a thousand apartments. That would be to hear the voice of at least one witness of this move. Was it really, or was everything as usual.

The issue of providing housing for servicemen and those who have gone to the reserve is far from new. Back in the year 1983, the author of the text experienced all the “charms” of the housing distribution system. Then there were still queues. They (queues) were more or less controlled. However, the author was moved until he had to write a report with the certificates of the younger son’s illness. Judging by the conversations with colleagues, according to reports in the media, the distribution system has transformed greatly, from half open it has become completely closed. On the one hand, the victorious reports of the leaders of the Defense Ministry - every year or two all servicemen are fully provided with housing. Then - oh, it didn't work out - postponement. Very reminiscent of the author's early childhood, when a huge poster hung on the fence of the city garden: “Our generation in 1980 will live under communism!”. And because they believed. On the other hand, the statements of reserve officers (sorry, without banknotes): “We drove Durkee with cooperatives and certificates, and a new wave of warriors hang tales about the mortgage on the ears. The service people got confused in orders and directives. What thoughts about the service? And the specialists are not the same, and the cartridges are “dampened”. I'm afraid to wake in captivity! ”.

Or another officer tells how, before being transferred to another part, he handed over his apartment with the intention of receiving a new dwelling at a new service station. This apartment was already inhabited. But persuaded in part to pass. Guess if this officer received a similar apartment at a new duty station? Of course I did. Barak and nothing more.

Then the shares. And so this officer got stuck after being fired on the shares. The author of the text, after graduating from the academy, hoped to get a new apartment at the new duty station, the benefit being built in the 80 years of the house. However, it did not work out. The boss was tired of living in the old apartment, and he also aimed at the new one. And they decided to spice up the old apartment to the author of the text. You can say: “Well! Still sorted out. ” And you will be right. The author was just lucky. And how many officers spent the best years of their lives in remote garrisons and ended up with nothing!

I just want to say: “Oh, how many wonderful discoveries are for us ...”. On the Internet there are letters to the authorities from offended military personnel. Known letter officers in the neighborhood "Pechersk ridge" in Nizhny Novgorod. “Suddenly” there was a mess with extra square meters. In the area of ​​New Izhora near St. Petersburg MO bought a whole block of housing with excess areas. So why was it necessary to freeze so much money, if it is impossible even to allocate to officers and ensigns even with a surcharge? Or here's the case. The officer serves in Vologda. He was given an apartment in Krasnodar. Good? Fine. Officer send registered letters - come for documents. And the officer is not paid a pay, and he does not have the financial ability to come for the documents. And MO at this time continues to pay utility bills. Everything. The circle is closed. How do these effective managers manage the ministry?

Interesting is the increased tendency of watering the soldiers with mud. It hurts like a paid job. For example, the following statement (also without banknotes): “Why should I pay 25000 with my salary from my own taxes to the police and the military, who have a 45-70 salary? Moreover, I will retire in 60 years, and they are in 40. And they have a normal military pension, and I will be beggarly. For a kindergarten for a child, 80000 is required from me, and they have a separate preferential queue. There is no desire to make an analysis of this crazy statement. But after all, people read and believe what was written, just as they believe what they see in the box. Or another: “Before me stands the house of 20 floors, last year they solemnly handed the keys to the servicemen - well, today we can say with confidence that at least 90% of the apartments there are rented. They do not need housing. They have it, but of course, they are pleased with the presents. ” In fact, there is a deliberate discredit of servicemen in the eyes of society. What for?

Still alive история with the order of the Ministry of Defense No. 1280 from 30.09.2010. To prove the good name you need to collect the order of 40 documents. Under the “sly”, officials from Rosreestr raised the price for issuing certificates from the USRR. For a family of five, this is 7500. Moreover, the validity of these certificates is limited. And in order to collect all the information the officer must go round all the garrisons in which he served. And if this is Kaliningrad and Vladivostok? Yes, the old part has already been disbanded. No money is enough. In fact, the officer is obliged to prove that he did not buy an apartment somewhere for his “mad” salary and in between fights. One can guess that there are “nimble” ones who, for one reason or another, were able to get an extra apartment. But this concerns only a limited contingent from the “they can do a lot” series.

The media cites data that about two hundred thousand military personnel, military retirees and their families did not receive the apartments prescribed by law. Nevertheless, it is only visible on the screen, as the leadership of the country and the MoD appears in one garrison, then in another. And then in the plots appear some people with laudatory odes. Guide MO promises to make the queue for housing transparent. The queues in the units were removed under the pretext of creating a common queue, but it turned out that there is no queue now either in the units or in the MO. Stupid confusion.

There is also one more moment in this story which is somehow not mentioned. This is an infrastructure for housing estates that will be settled by military personnel. When allocating land for new buildings, hardly anyone thought about working for the residents of the new microdistrict. If the neighborhood is in close proximity to a large city, then a job search is possible. And if far enough? Where are the officers to work? And their wives?

As there was no work in the military camps, so there will be no microdistricts. Strange even. I very much want the local administrations, in whose jurisdiction these new housing estates are located, to simply think about how to organize jobs for all these educated and disciplined people. After all, the result is needed on both sides. Military retirees - reliable employment. Administrations - additional income in the form of stable taxes. May the state really turn its face to the military, military retirees and their families. Good luck to all of us.

***
In connection with the construction in Russia of a mixed system of military service, when the army consists of both contract soldiers and draftees, the Ministry of Defense of the Russian Federation faces a new problem - the problem of providing contract servicemen with departmental housing. Moreover, each military unit in the person of the commander is trying to solve such a problem by his own methods. In some parts, contract servicemen rent housing, which is partially or fully paid from the military budget. In others, they came to the conclusion that it is possible to re-equip the barracks for housing just “civilian” soldiers: buy furniture, sew curtains cheapto purchase household appliances. Thirdly, they use the option of building small dormitories, which can be located both in the territory of the part and in the "civil" territory. For such a case, an agreement is concluded with the local authorities who can act as co-investors of the project.

Naturally, the third case may be the most expensive, but in most cases it is the one that is most appropriate. Firstly, the use of modern hostels for contract servicemen is an excellent attraction of soldiers serving in the call to sign a contract and get a new status and departmental housing, which will be paid from the state budget, and not out of pocket. At the same time, a private room in a hostel is a much more civilized option for those soldiers who have already managed to get a family or are going to do it. After all, not every soldier has the opportunity to rent housing, especially in such large cities as Moscow or St. Petersburg, where rental prices "bite". Most often, in this case, the contractor is allocated funds that can not fully cover the cost of rental housing.

The contract service in the modern army assumes the provision of housing for a soldier, therefore the use of mini-hotel projects and hostels for military personnel can be considered a complete way out of the situation with a housing shortage. After optimizing the size of the Russian army, the treasury of the Ministry of Defense freed up serious funds that could well cover the needs of contract servicemen for departmental housing.