28 May 2014
36
H. Nasrallah, the leader of Hezbollah, explained to the Lebanese through a video message that only a “policy of containment” could “protect the Lebanese land”. Such a policy is precisely pursued by Hezbollah, which, according to Nasrallah, “improves the restraining force” day and night, which “disturbs the Israeli enemy”. This “enemy” was alarmed to the extent that “even the sound of water scares the Israeli soldiers”. 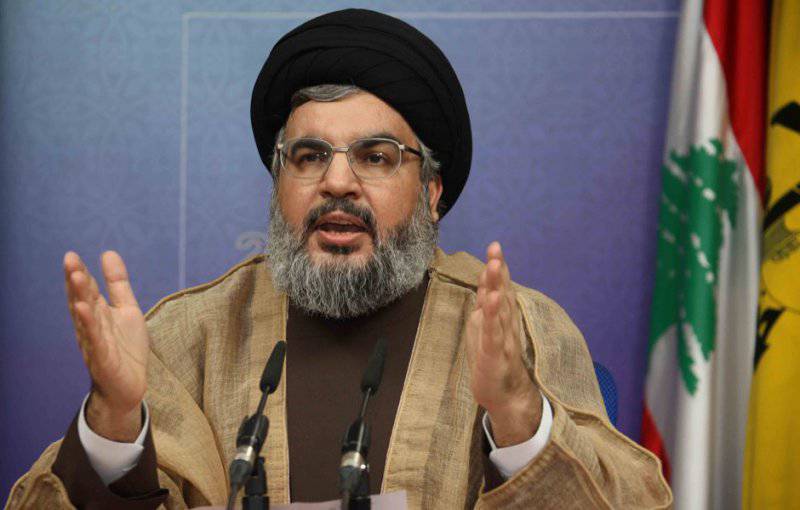 Recently, the newspaper "New York Times" led opinion of several experts on the Middle East. One of them, Eli Carmon of the International Institute for Counter-Terrorism, believes that Hezbollah is focused on Syria, and its position on Israel has been weakened.

Maybe so, but here only Hezbollah holds the opposite opinion.

According to MIGnews.com, Hezbollah leader Hassan Nasrallah spoke on the occasion of the 14 anniversary of the withdrawal of Israeli troops from southern Lebanon.

The speech was broadcast on 25 May on large screens during a rally in Bint Jubail, where 20 lives thousands of people. The settlement is located within walking distance of the Israeli border. That is, in fact, it was a borderline performance.

Nasrallah declared "more and more frequent violations of the border by Israel" and warned: "This must be stopped."

The event was also attended by Lebanese Parliament Speaker Nabi Berri, the Syrian Ambassador to Lebanon, a representative of the Iranian embassy and other politicians close to Hezbollah.

“Our deterrence policy is the only thing that can protect the Lebanese land, the Lebanese people, the institutions of power, the resources, the honor and the future of the country. We are improving our deterrent strength day and night, and this is worrying the Israeli enemy. We used to be afraid, but now those who are on the Israeli side are afraid. Now even the sound of water scares the Israeli soldiers. So don't be afraid of the enemy. ”

As for the Syrian conflict, it is not known who is more drawn into it: Hezbollah or Israel. French Newsletter Browser "Intelligence online", for example, I am sure that Israel is increasingly getting into conflict. Some details about Israel’s involvement in the Syrian war, borrowed from French material, led bmpd.livejournal.com.

Among other things, it is noted that the seizure of the Syrian military base in Tal al-Ahmar (Red Hill) by the Al-Nusra Front worried Israel. "Red Hill" is located near the Israeli border and locks the Golan Plateau.

The official policy of Tel Aviv towards Syria has not changed, but the Israeli army and special services, the author of the material notes, began to act in order to prevent the exit of Dzhebhat al-Nusra to the border. Flight of the UAV over the positions of militants has become more intense.

In addition, Israel is trying to convince the heads of villages located on the Syrian border not to shelter or feed the militants.

Interesting and the following.

The wounded soldiers of the so-called "Free Army of Syria", just like the wounded civilians, "are secretly transported to Israel and are treated in Israeli military hospitals." On the Golan Plateau, a border post has been opened specifically for crossings.

It is also reported that Israeli intelligence officers in the camps of Syrian refugees on the border with Jordan are working in collaboration with Jordanian and American counterparts.

All this, however, can only with a strong stretch be called the "drawing" of Israel into the war. Rather, Tel Aviv thinks about its own security - just as he had thought about it before. And just as before, Tel Aviv does not bet on Bashar Assad, but plays against him.

As for the loud statement of H. Nasrallah, this is an ordinary propaganda statement in the oriental style, picked up and overly inflated by the press.

And if anyone gets involved in anything, it's Nasrallah himself, whose actions and statements have already been cursed by Sunni Arabs.

Observed and commented on Oleg Chuvakin
- especially for topwar.ru
Ctrl Enter
Noticed oshЫbku Highlight text and press. Ctrl + Enter
We are
Results of the week. “He who does not regret the collapse of the Soviet Union, has no heart; who wants to recreate it in its previous form, he has no head "What is Hezbollah is preparing for and what it stands for?
Military Reviewin Yandex News
Military Reviewin Google News
36 comments
Information
Dear reader, to leave comments on the publication, you must sign in.