Transformation of Russia into a World Power ("OpEdNews.com", USA) 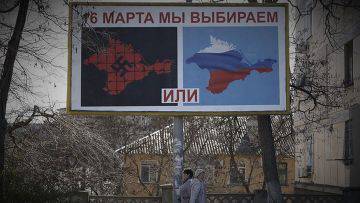 Western propaganda broadcasting events in Ukraine has two main goals. The first is to hide, divert attention from the role that Washington played in overthrowing the elected democratic government of Ukraine. And the second is the demonization of Russia.


The truth is known, but the truth is not needed by Western television and print media. Intercepting a telephone conversation between Undersecretary of State Victoria Nuland and the American ambassador to Ukraine, Jeffrey Payette, shows how two conspirators discuss which of the Washington puppets to make "our man" in the new puppet government. Intercepting a telephone conversation between Estonian Foreign Minister Urmas Paet and EU Foreign Minister Catherine Ashton speaks about his presence and who later found confirmation of suspicions that sniping at people from both sides of the Kiev protests was opened by those participants in the conflict who were supported by Washington.

In short, when Washington organized the Orange Revolution in 2004, and this revolution failed to transfer Ukraine into the hands of the West, the United States, according to Victoria Nuland, invested 10 billions of dollars in 5 the following years. This money went to politicians who were trained by Washington, as well as non-governmental organizations involved in education, the struggle for democracy and human rights activities, and in fact playing the role of the fifth column of Washington.

When President Yanukovych, having considered all the pros and cons of inviting Ukraine to join the European Union, rejected it, Washington sent its well-funded nongovernmental organizations to battle. In Kiev, protests began, the participants of which demanded that Yanukovych change his decision and join the EU (as in the text - approx. Transl.).

These were peaceful protests, but soon ultranationalists appeared with neo-Nazis on the streets, and then the violence began. The demands of the protesters have changed. Now they insisted not on Ukraine joining the EU, but on the overthrow of Yanukovych and his government.
Protesters on Independence Square in Kiev

There was political chaos. Washington put a puppet government in power, presenting it as a democratic force fighting corruption. However, ultranationalists with neo-Nazis from the Right Sector began to intimidate members of the puppet government created by Washington. Responding to intimidation, Washington's puppets began to speak out against the Russian-speaking population of Ukraine.

Some areas in the south and east of the country are former Russian territories that Soviet leaders have incorporated into Ukraine. Lenin annexed the Russian territories to Ukraine in the early years of the Soviet Union, and in 1954, Khrushchev handed over to her the Crimea. People from these Russian regions, alarmed by the destruction of Soviet military memorials erected in honor of the liberation of Ukraine from Hitler by the Red Army, the abolition of the status of the Russian language as official, as well as attacks on the Russian-speaking population of Ukraine, made a protest. Crimea voted for independence and requested reunification with Russia. The same done Donetsk and Lugansk region.

Washington, its EU puppets and Western media deny that voting in the Crimea, Donetsk and Lugansk is sincere and spontaneous. Instead, Washington claims that the protests led to a referendum, and the referendum itself was organized by the Russian government through bribes, threats and coercion. He says that in the Crimea, Russia carried out an act of invasion and annexation.

This is a blatant lie, and foreign election observers are aware of this. But they do not have the right to vote in the Western media, because the Western media is owned by the Washington Ministry of Propaganda. Even the once proud BBC is lying in the interests of Washington.

Washington succeeded in explaining the “Ukrainian crisis” by taking this outreach work under its tight control. On people in the Crimea, Donetsk and Lugansk, he pasted the label "terrorists". In contrast, the Ukrainian neo-Nazis were elevated to the rank of members of the “democratic coalition”. Even more striking is the fact that neo-Nazis in the Ukrainian media are called “liberators” of protesting regions from “terrorists”. Most likely, the Russophobic neo-Nazi militants are becoming the army of a puppet government subordinate to Washington, because so many units of the Ukrainian armed forces do not want to shoot at peaceful protesters.

Now we are faced with the question of how the Russian leader, President Putin, will behave in this game. Western media took advantage of his hesitations and doubts about the adoption of Lugansk and Donetsk regions back into Russia, claiming that he was weak and scared. Inside Russia, non-governmental organizations and Russian nationalists funded from Washington will take advantage of this.

Putin understands this, but he also understands that Washington really wants to find confirmation of the diabolical portrait of the Russian president, which he painted. If Putin agrees to the request of Donetsk and Luhansk to accept them back into Russia, Washington will begin to repeat its statements about the Russian invasion and annexation. Most likely, Putin is not weak and not scared, but for good reasons he does not want to give Washington new opportunities for propaganda in Europe.

Washington insists on sanctions against Russia, but runs into an obstacle in the person of Germany. German Chancellor Angela Merkel is also a Washington vassal, however, Foreign Minister Frank-Walter Steinmeier and the German industry do not welcome sanctions. Besides the fact that Germany depends on the supply of natural gas from Russia, thousands of German companies are engaged in business in this country, and economic relations of this kind give the Germans several hundred thousand jobs. Former German Chancellors Helmut Schmidt and Gerhard Schroeder criticized Merkel for her subservience to Washington. Merkel's positions are weakened, because she, on her own stupidity, sacrificed the interests of Germany for the sake of Washington.

Putin, who demonstrated that he is not some kind of unresponsive Western politician, sees in the conflict between Washington’s pressure on Berlin and the real interests of Germany an opportunity to split NATO and the European Union. If Germany decides, as Yanukovych did, that it is in her interest to maintain economic relations with Russia, and not be a puppet of Washington, can the United States overthrow the German government and put a more reliable puppet in power?

Perhaps Washington Germany is just fed up. Still occupied by American troops (69 later years after the end of World War II!), Germany supports such educational traditions, has such history, pursues such a foreign policy and a policy of EU membership, and also uses such a mechanism of the euro, which Washington forces it to enforce. If the Germans have at least a bit of national pride (and as a newly united people, they should have some kind of national pride), they should not accept what Washington imposes on them.

Least of all, Germany wants economic and military confrontation with Russia. German Vice Chancellor Sigmar Gabriel said that "in fact, it was not the smartest step to create the impression in Ukraine that it should make a choice between Russia and the EU."

If the Russian government decides that Washington’s control over Ukraine, or what remains of it after separation, is an unacceptable strategic threat to Russia, the Russian army will seize Ukraine, which has historically been part of Russia. If Russia occupies Ukraine, Washington will have nothing left but to unleash a nuclear war. NATO countries, whose very existence will be at stake, will not agree to this option.

Putin can take Ukraine back when he chooses, and then turn away from the West, this decadent and spoiled education, which is mired in depression and is being plundered by the capitalist class. 21-th century belongs to the East, China and India. And the vast expanses of Russia are just to the north of these two most populated countries in the world.

Russia can begin its ascent to power and influence along with the East. She has no reason to beg the West for recognition. At the heart of US foreign policy are the doctrines of Brzezinski and Wolfowitz, which say that Washington should prevent the strengthening of Russia. Washington does not have goodwill towards Russia, and it will stick its wheels into it at every opportunity. As long as Washington controls Europe, Russia has no chance of becoming part of the West. The only possibility for her is to turn into a puppet state of Washington, as Germany, Britain and France did.

Dr. Roberts was Assistant Minister of Finance for Economic Policy in the Reagan Administration. He served as deputy editor and columnist for the Wall Street Journal, and led a column in Business Week and the Scripps Howard News Service. He writes for Trends magazine. Roberts works in several universities. He recently released a new book, How America Was Lost.

Ctrl Enter
Noticed oshЫbku Highlight text and press. Ctrl + Enter
We are
The fault is NulandGeopolitical mosaic: the Chinese decided to help the Russians defend the Kuriles, Victoria Nuland sent the European Union to “f”, and Obama announced that Putin respects him
Military Reviewin Yandex News
Military Reviewin Google News
25 comments
Information
Dear reader, to leave comments on the publication, you must sign in.