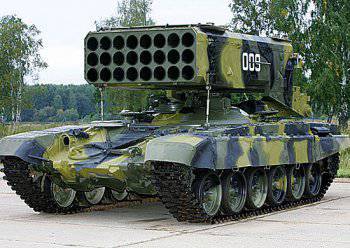 According to the "APA", in the near future, another batch of Russian TOS-1A jet flame throwers will be sent to Azerbaijan. This was reported by representatives of the concern "Uralvagonzavod", who visited the KADEX-2014 exhibition in Astana.


The next batch consists of six cars. Before handing over to the customer, the fire systems will be tested at one of the Azerbaijani landfills.

According to representatives of the concern, under the signed contract, Azerbaijan will receive 18 units of TOS - 1A "Sunshine". In 2013, the first six cars were transmitted, which took part in the June parade in Baku.

It is worth noting that at the moment the TOS-1A “Sunshine” systems are in service with the armies of Russia, Kazakhstan and Azerbaijan.