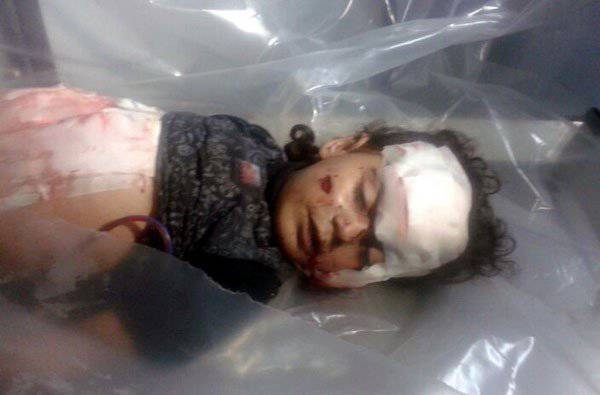 In the vicinity of the Syrian city of Daraa on Friday, 23 May, one of the most brutal and barbaric crimes of terrorists against civilians, against the presidential elections, against the country's future was committed.

Syria is preparing for a historic event - the election of the head of state, which will be held 3 June. People express their patriotic feelings in different ways. In particular, the campaign “Tents of the Motherland” is held throughout the country In the cities and villages, large tents are set up where patriotic gatherings are held. Often there are so many people who don’t fit in the tent, and then the meeting becomes a demonstration. People come there with their families. Come with children of all ages. Not only listen to the speakers, but also communicate, dance, have fun. Music is playing. All have a festive mood.

Bandits cross the soul when people rejoice. And on that tragic Friday in the south of Syria, near the airport near the city of Daraa, according to the participants of such a folk festival, according to a large crowd, to where the apple had no place to fall - the “oppositionists” fired several mortar shells. The music stopped, the dancing stopped. Screams of horror, blood, death replaced the holiday.

At first 21 was reported dead, but then their number increased to 39 - the wounded died in hospitals. 205 people suffered. Among the victims of cynical crime are women, children, old people.

But how did the so-called “Syrian Human Rights Monitoring Center” (OSDH), based in London, respond to this barbarous crime: “It was an obvious message from the rebels to the regime that there was not a single place safe for voting”.

OSDH is a deceitful office, which especially proved itself in 2012 during the events in the village of Al-Khul in the province of Homs. It was this “center for monitoring the observance of human rights” that was instructed to spread lies about the involvement of the Syrian government in the murder of dozens of people in Al-Hula. Then, let me remind you, Kofi Annan’s plan, which provided for a cease-fire, was actually thwarted, and the forces supporting the “Syrian opposition” went to an escalation of the conflict. Then, however, it turned out that those killed in Al-Hula were supporters of legitimate authority, they were killed by terrorists, but the “world community” chose to leave it unattended. The goal of the provocation was achieved - they shouted about the "crimes of the Syrian regime", justified large-scale assistance to terrorists.

Now that the guilt of bandit formations in the deaths of dozens of people is obvious - no human rights screams of “the world community” are heard. And the structure under the beautiful, humanistic-looking name “Syrian Center for Monitoring Human Rights Observation” not only does not condemn, but in fact welcomes the terrible crime - mortar shelling of a large crowd of civilians.

The governor of the province of Daraa, Muhammad Khaled Al-Hannus, in an interview with Syrian television stressed that the shelling occurred at a time when the street was filled with people from all walks of life, representatives of many tribes, there were many children, youth and women.

Al-Hannus expressed confidence that this crime will not break the Syrians, in particular, the residents of the province, and will not force them to abandon their patriotic duty - participation in the presidential elections.

It is possible that after this monstrous attack, the number of patriotic actions will have to be reduced. Perhaps the authorities will be forced to ban them altogether so as not to endanger the lives of civilians. But the people will say their word 3 June at the polling stations.

The UN Secretary-General Ban Ki-moon reacted very restrainedly to the atrocity of the “opposition” militants. And then - not personally, but through his official representative Stefan Dujarrik. The latter stated at the briefing that “Ban Ki-moon reaffirmed his rejection of the indiscriminate use of any weapons by any of the parties against civilians in circumvention of their obligations under international humanitarian law and human rights”.

Such streamlined words about anything show that the UN Secretary-General is trying to maintain neutrality, and his language does not turn to name those responsible for the massacre. But in cases where his owners want to once again accuse the Syrian authorities, Ban Ki-moon does not regret any words or emotions.
The Syrian Foreign Ministry sent messages to the UN and the UN Human Rights Council calling on them to condemn this heinous crime.

“This heinous murder is another link in the chain of numerous crimes against the Syrians .... Every day a squall of shells hits the Syrian cities, schools, hospitals, places of worship, and clusters of civilians so that the number of casualties among them becomes maximum. These crimes are committed under the cover and with the direct support of a number of countries in the region and the world, in particular Qatar, Saudi Arabia, Turkey, France, the United Kingdom and the United States. These countries sought to implant terror and dark ideas in Syria, believing that they themselves would be protected from it. But today, terror extends to the states that support it and feed it, ”the SAR Ministry of Foreign Affairs said.

But the UN is silent. The forces that literally burst from screaming at the oppression of “human rights” by the legitimate government of the SAR, the forces that launched aggression against Yugoslavia after the found burial of 24 people (which later turned out to be falsification), which bombed Libya after hysteria due to the death of demonstrators - these same forces demonstrated utter indifference to the fate of the inhabitants of Dara, who came to the folk festival, and were under mortar fire.

It should be noted that Daraa was the very city where the Syrian confrontation began. When several demonstrators died because of provocations by “unknown snipers,” anti-Syrian forces launched an informational attack on Damascus, which soon gave way to real terrorist attacks. But people who came to the patriotic action, according to these forces, can be killed with impunity.

This impunity breeds new crimes against peaceful Syrian citizens. So, 24 in May in the city of Damascus in the Tijar region, a car bomb exploded, causing 4 people to die, 9 injured, including a woman with a child.

In Qudsay, a suburb of Damascus, militants attacked two members of the Commission on National Reconciliation. One of them, Isam As-Salhani, was abducted and tortured. Fortunately, he managed to quickly escape from captivity. The other, Khaled Al-Bushi, was badly wounded.

25 in May a crime that led to the death of a 10 man, occurred in the city of Homs in the Zahra district. A mined car exploded in a densely populated street. 30 citizens injured. Another car bomb exploded also in Homs on the highway near the refinery. As a result of a car bomb explosion, a passenger bus suffered, 12 people received injuries of varying severity.

In the city of Damascus, Aleppskaya Street in the Abbassiin quarter was subjected to shelling. Two civilians were injured.

In Hama province, gunmen fired 8 rockets around the town of Mhard. Four people were injured, one of them is in serious condition. Material damage was also inflicted on local residents.

The meeting was held in a warm, friendly atmosphere. Bashar Al-Asad once again thanked Russia for supporting the Syrian people. According to him, the veto of the Russian Federation, imposed on the draft French anti-Syrian resolution in the UN Security Council, saved not only Syria, but the entire Middle East from escalating violence. In addition, the Syrian leader expressed support for Russia's policy towards Ukraine.

As D.Rogozin noted after the meeting, Bashar Al-Asad was in high spirits. For his part, the Russian Deputy Prime Minister invited the Syrian delegation to Moscow.

He also supported the idea of ​​holding presidential elections in Syria: “We have no doubts about the legitimacy of elections in Syria, they are held in accordance with the basic law of the Syrian Arab Republic on the due day. From the point of view of further negotiations to calm the situation in the country and reconcile the warring parties, it is extremely important that the Syrian state is represented by a legitimately elected president. ”

But it is the legitimate election and the legitimate president of Syria that is the bone in the throat of the West. It is no accident that the barbaric shelling of the election campaign in Daraa took place shortly after the meeting of Obama and Hollande with the head of the so-called "Syrian opposition" Ahmad Zharboy. It can be assumed that the militants carried out the order of their Western sponsors, who had announced in advance that the presidential election in the SAR was not recognized. After this brutal murder, the cries of Europe and the United States about the "humanitarian catastrophe" and "the protection of civilians" sound particularly monstrous.

Ctrl Enter
Noticed oshЫbku Highlight text and press. Ctrl + Enter
We are
Results of the week. "And your American music is shit"Wounded Gorlovka celebrated the tragic anniversary
Military Reviewin Yandex News
Military Reviewin Google News
39 comments
Information
Dear reader, to leave comments on the publication, you must sign in.