China is experiencing a surge of Islamist terror 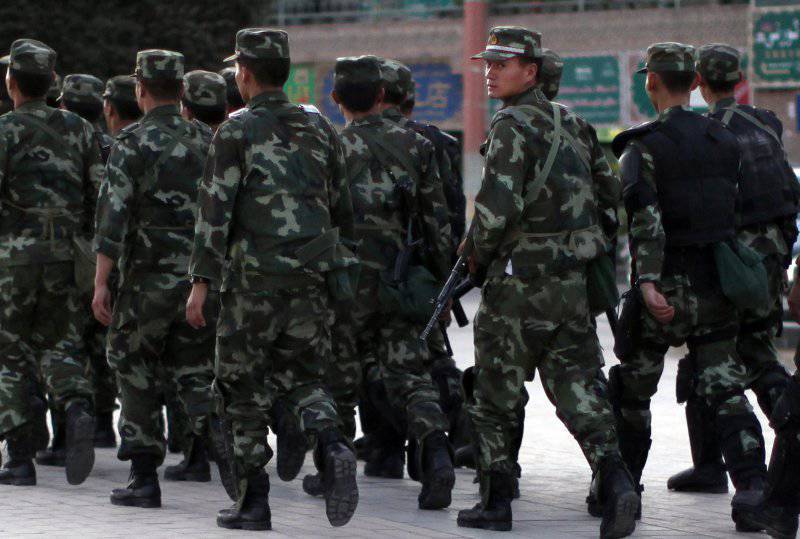 Another explosion in the city of Urumqi - the capital of the Xinjiang Uygur Autonomous Region of China - claimed dozens of lives. This terrorist attack has become the largest in recent years, although city residents have long been accustomed to such “surprises”: an unprecedented surge of terrorist activity is observed in the western part of China. The overwhelming majority of the attacks were carried out by Islamists, who received financial support from their foreign "partners".

The main goal of the PRC is to become a rich and strong power, reaching a qualitatively new level in global politics. Now, China, despite its enormous potential, is still a regional power with many internal problems that the government has been struggling with since the end of the 70s. In turn, the foreign sponsors of the militants of the Xinjiang Uygur Autonomous Region set themselves the task of destabilizing the situation in the PRC as much as possible in order to prevent China from becoming a strong global player. It is necessary to destroy the production infrastructure, to frighten off investors, to sow fear in the society, “to tie with blood” as many citizens as possible.

A series of explosions 23 May in Urumqi - one of the episodes of such a scenario. Unknown people in two cars in the city market crash into the crowd, after which one car explodes, and from the second, explosive devices fly into people. Three dozen people die on the spot, another 90 receive injuries of varying severity. Who should blame the relatives of those killed?

In Urumqi, two communities live compactly - Uigur and Chinese. If someone wants to avenge the dead, the consequences of such an act are difficult to predict. The city in 2009 had already survived the pogrom that killed 197 people. Is it the fault of unknown terrorists that should happen again?

No wonder the PRC Chairman Xi Jinping made an extremely tough statement about the terrorist attack on the Urumqi market. He promised to spare no effort in order to punish the terrorists, as well as to prevent destabilization of the situation in the west of China. But the enemies of the People's Republic of China are silent: no one has taken the responsibility for the murder of 31.

However, and so it is clear who is the perpetrator of the attack. We are talking about the organization of the Islamic Movement of East Turkestan. The day before the tragedy, the Xinhua News Agency reported that the court had sentenced 39 to extremists who were convicted of propaganda of terrorism and participation in illegal armed groups.

However, the question of who paid for the attack on the market in Urumqi remains open. Xinjiang Uygur Autonomous Region is a rather poor region where business does not flourish at all. Urumqi is not a financial center, and getting money through classical expropriation of the expropriators is a serious problem. Surely the funds come from abroad.

An indirect confirmation of the fact that the sources of funding for Uyghur terrorists are abroad is the fact that the number of terrorist attacks has recently increased dramatically. This is a completely unnatural phenomenon, because there were no prerequisites for an increase in the number of extremist attacks. In past decades, a lingering confrontation between the Uighurs and the Chinese never led to such a number of victims. It is obvious that someone started to artificially stimulate the conflict.

So, since the beginning of spring, the attacks began to occur not only on the territory of the Xinjiang Uygur Autonomous Region, but also hundreds of kilometers from its borders. Two months ago, in the city of Kunming, located in the southern province of Yunnan, armed with cold weapons unidentified individuals attacked one of the passenger trains and killed a 29 man. In October last year, the attack occurred on Tiananmen Square in Beijing. It is known that Uygur terrorists penetrated into the countries of Central Asia, where, however, they show little activity.

Who benefits from destabilization in China? So far, only one global player is capable of such actions anywhere in the world - the United States. Washington does not like that the Celestial wants to play on an equal footing with the United States. According to American experts, China is consuming too many resources, and is going to build its own “golden billion” society as opposed to the same “billion” already existing in the West. Thus, we see the picture of a global war for the distribution of resources between China and the United States.

The United States is trying to surround China around the perimeter, and at the same time blow it up from the inside. There are quite a lot of levers of pressure on the Celestial Empire: the PRC suffers from many ills, ranging from the uneven development of regions and ending with uncontrolled consumer growth. The Chinese want to live as richly as in the West, and therefore they demand more and more benefits. The government cannot satisfy all the demands of the population, because it has limited resources.

Using this, as well as other problems of the Middle Kingdom, puppeteers from Washington skillfully manipulate the parties to the conflicts and force them to act in the interests of America. Moreover, if a player turns out to be very promising, the USA is ready to play along with him almost openly.

According to Russian Sinologist Yuri Tavrovsky, Uighur terrorists are now being trained in the mountains of Afghanistan by Salafis who have arrived from Syria. It is not difficult to guess who gave the "go-ahead" to carry out such activities, because Afghanistan is now under American occupation, and Salafis in Syria are fighting with the tacit support of the United States.

There is another opinion about the sources of financing of Uygur terrorism. Thus, the chief researcher of the Institute of the Far East, Alexander Lomanov, believes that Al-Qaida is involved in the escalation of violence in western China. It is her “handwriting” that is traced in the manner in which the last terrorist attacks were carried out. However, even if the al-Qaeda militants declared war on China, this does not diminish the benefits that Washington will derive.

The administration of Barack Obama, apart from the internal destabilization of the PRC, is solving another task, and hopes to involve Beijing in a difficult game in Central Asia. Trying to neutralize the terrorists, China will, willy-nilly, be forced to turn to its neighbors. And this is despite the fact that Beijing has still not solved the problem with access to the global ocean: South Korea, Japan, Taiwan and the Philippines are loyal to the United States, and serve as a deterrent for Chinese expansion eastward.

The welfare state — the blue dream of the current party leadership of the Celestial Empire — has not yet been on the verge of collapse, but this idea will not be realized if Beijing fails to crush the hydra of terrorism in the western regions of the country. As is known, the escalation of violence occurs in a spiral, and the current dozens of the dead will be converted into hundreds in the next year, and in the following year - into thousands. Even worse, if China is involved in the Central Asian games, especially on the eve of the withdrawal of the occupying NATO forces from Afghanistan.

The Celestial Empire can be saved only if it continues building good-neighborly relations with Russia. After all, only from the Russian border does not threaten China: in the east - military bases of the United States and American allies, in the south - impassable Himalayas and hostile India, in the east - Islamic terrorists and, again, military bases belonging to the United States.

So Islamist terror in the Xinjiang Uygur Autonomous Region is an unsuccessful attempt to completely isolate China? Yes, if Moscow continues to cooperate with Beijing. Russia for China is now a window into the world, a source of growth and a reliable ally in matters of confrontation with Islamism and American expansion. The revitalization of the Uyghur terrorists only increased China’s dependence on the Russian infrastructure, and makes Beijing continue to look for support in Moscow on key foreign policy issues.