“... And weapons, and prostitutes, and dope”, or Petro Poroshenko 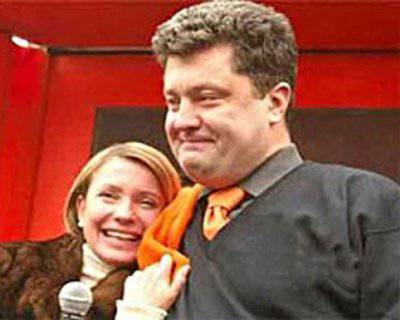 No matter how thin the turnout at the election of the Ukrainian president may be this coming Sunday, their outcome, according to the general opinion, is predetermined: the American leader Poroshenko will be declared president. The geographical map of electoral preferences, which will be denoted by 25 in May, split Ukraine even more: they do not recognize the chocolate maker and notable publicist plunder of government money in significant territories. Poroshenko does not have a chance to keep the country from continuing the bloody civil conflict, even with the manual control of Ukraine through Biden, Nuland and Payette. Actually, such a task before the "chocolate hare" by the Americans is not set ...


Billionaire Poroshenko began his business with the legalization of money of the old Soviet tsekhovikov. The legend of Poroshenko as a successful single businessman was invented. The criminal connections of the father, convicted in 1986, for the theft of material values ​​on a large scale helped. The father, after his release from prison, first started doing business, then pulled his son into this business. The business was dirty: it all started with a gang of machine gunners of state-owned objects. The powders were threatened not only to Ukraine. Famous Kyiv lawyer Tatiana Montyan recalls family affairs in Transnistria: “There was horror: and weapon, and prostitutes, and drugs - in transit went to 90-e, and dad and sonny actively ruled all this. " For these merits in 2009, Petro Poroshenko bought from Yushchenko, his godfather, the title of Hero of Ukraine for his dad.

Petro Poroshenko became widely known thanks to his tireless attempts to put budget money to serve his personal business. The future president of a part of Ukraine is a master forging the “left” money. He was repeatedly accused of involvement in corruption on especially large scale, in open lobbying, in falsifying the budget, in tax evasion, in illegal operations of buying up shares of enterprises, in threats of physical violence against political opponents and competitors. At the same time, it is not the petty grabber who is trying to steal budget funds from the people, but a real oligarch, the owner of a huge multi-business empire.

In the world ranking of wealthy Jews, according to the American magazine Forbes, Petro Poroshenko ranks 130-e place with 1,6 billion. The real name of the future president of Ukraine is Petr Valtsman. Poroshenko-the name of the mother of the oligarch, is also Jewish.

In the past, Poroshenko is one of the main sponsors of Our Ukraine and Viktor Yushchenko. Poroshenko is also the owner of 5 Channel, which for many years has been carrying on violent anti-Russian propaganda. The company Roshen owned by him until recently earned hundreds of millions of dollars annually in the Russian market. As of 2012, Roshen accounted for 3,2% of the Russian confectionery market (6 ranks among manufacturers). Poroshenko always earned money in Russia for anti-Russian projects.

The current candidate and the president of tomorrow call the struggle for the return of the Crimea and the further defense of Ukraine against “external aggression” as its priority. Find in the Poroshenko election program specific proposals is difficult, they are not. They are replaced by calls to make Ukraine "free and European", "to restore the army", etc. Many people in Ukraine, when Poroshenko talks about “patriotism”, “national unity”, “protection of human rights”, have a natural feeling of disgust.

Petro Poroshenko is also a famous political chameleon. This oligarch with particular cynicism entered Ukrainian politics so that, having launched his hand into the treasury, he would never take it out of there. With all the ambitions and undisguised lust for power, he does not have a public, high-quality and professional team. There are no ideas, no action program. There is only money and desire, having acquired the power, to have even more money.

Now Petro Poroshenko controls the regional ruling groups of the Vinnitsa, Volyn, Chernivtsi and Zaporizhia regions, but wants to subjugate the whole of Ukraine. The political intrigue of Poroshenko, whose name involves dozens of scandals, knows no boundaries. He was and remains in Ukraine one of the most odious characters, the number one corrupt official. Now, failing a dozen roles in the great Ukrainian politics, Poroshenko is going to sit in the presidential chair with the blessing of Washington.

Ctrl Enter
Noticed oshЫbku Highlight text and press. Ctrl + Enter
We are
Religious conflict in Abkhazia? It is possibleThe importance of the Victory Parade in Russia is being questioned
Military Reviewin Yandex News
Military Reviewin Google News
131 comment
Information
Dear reader, to leave comments on the publication, you must sign in.